The Bad Plus: Music’s recombinant DNA 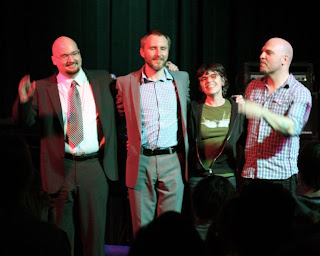 I've seen The Bad Plus pretty much every time they have played Minneapolis/St. Paul. I have their very early Authorized Bootleg (2001) signed by all three, and last night, following their “official hometown CD release” at the Cedar, they scrawled their names on their latest, For All I Care, their first recording with a vocalist.

The first half of the Cedar show is the trio sans singer Wendy Lewis, opening with Stravinsky’s “Variations d’Apollon” from the new CD. Melodious and mellow, with delicious ornaments on the piano. This is the first time I've heard Iverson play a Steinway concert grand (trucked in for the occasion; the Cedar’s house piano is an ancient upright) and he makes the most of it all evening.

That TBP has brought classical music into its repertoire seems logical for a group that sees all music as its personal playground.

From “Valentine” and Blondie’s “Heart of Glass” (both on Bootleg) through “Smells Like Teen Spirit” (their breakout tune), the “Chariots of Fire” theme, Queen’s “We Are the Champions,” country king-of-the-road Roger Miller’s “Lock, Stock and Teardrops,” Black Sabbath’s “Iron Man,” Rodgers and Hart’s “Blue Moon,” “Every Breath You Take” by the Police, Tears for Fears’ “Everybody Wants to Rule the World,” Rush’s “Tom Sawyer” and Abba’s “Knowing Me Knowing You,” they have played and recorded whatever they pleased, crossing genres, splicing musical genes.

Along the way, they have created their own sound (and written a lot of their own music), started numerous arguments about what jazz is/isn’t, given anyone who wants to keep music in labeled bins a thumping headache, and attracted a new generation of so-called “jazz listeners” who probably don’t call themselves that. (Except for "Valentine," I've never heard them play a jazz standard, straight or not.) What seems at times like irreverence toward music is precisely the opposite. 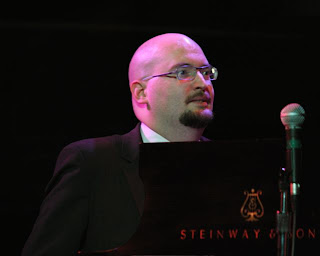 Next on tonight’s program: Anderson’s “You Are,” lush and symphonic (and not yet recorded?), after which Iverson picks up the mic to tell us what they have just played and deliver a tall tale about what they’re about to play. This between-tunes banter is a bonus of hearing them live. “Bill Hickman at Home,” Iverson says, is about the stunt driver Bill Hickman (Bullitt, French Connection) driving to the Hollywood Hills at the end of the day, stopping by a favorite deli for chocolate milk and his nightly TV dinner, settling in, playing solitaire, and planning the next day’s chase in his mind. The not-yet-recorded tune is a lazy, loping blues, with Anderson’s bass solo punctuated by pops from King’s drums.

Back to modern classical: Transylvanian composer György Ligeti’s “Fém” (Metal), a jagged, disjointed piece that fits perfectly in TBP’s book. Afterward Iverson intros King’s “1972 Bronze Medalist” (These Are the Vistas, 2003), painting a picture of an aging athlete named Jacques walking bare-chested each day through a town somewhere in France, wearing his medal. Hilarious.

Iverson’s opening on the piano would be at home on the concert stage. Anderson pulls the piece more toward jazz, filtered through melody. Not for the first time, I'm thinking that while TBP is a trio where everyone contributes equally to the process and the results, it’s King who adds the defining touches. His unique and unpredictable rhythms, taps and crashes, whispers, thunder rolls, sly asides, and (especially in live performance) his effervescent joy are what surprise and delight me most. 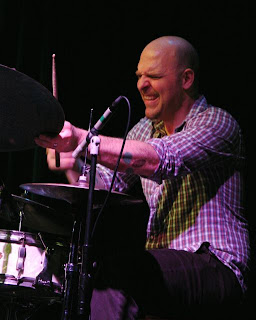 The first part ends with Milton Babbitt’s 12-tone piece “Semi-Simple Variations” from the new CD (“Babbitt’s greatest hit,” Iverson asides) and glides into “Prehensile Dream” (Suspicious Activity? 2005), an exquisitely beautiful, deeply sad piece by Anderson. I first heard it live in 2007, after which a local music critic noted, “We have just heard the future of jazz.” The tune starts softly and builds; tonight the midsection seems full of doubt and uncertainty.

It's time for Wendy Lewis, wearing jeans, a T-shirt, a zip-front hooded sweatshirt, red glasses, and what look like Doc Martens. I only mention her clothes because they are so non-diva. (Okay, to be fair: Iverson wears a suit and tie, as usual. Anderson looks spiffy tonight in a shirt and blazer [and sneakers]; his sartorial habits are less predictable than Iverson’s. Or King’s. Dave usually wears a long-sleeved shirt—he rolls up the cuffs—or a T-shirt.)

First up, the first track from the CD: “Lithium.” The trio does strange things with the rhythms at the end of each phrase—even stranger than on the recording—and Lewis doesn’t miss a beat. On their current tour, which began in October of last year and has taken the group all over Europe and the US, she must have sung this Kurt Cobain tune a zillion times but it’s still a mystery to me how she does it. It’s like watching a surfer stick the board on choppy seas.

Voice and bass begin Wilco’s “Radio Cure” (“Distance has no way of making love understandable”). On long-held notes, Lewis keeps her voice straight, steady, waiting to the end to add vibrato. During Anderson’s solo, she stays at center stage but turns to face him and crouches down, out of the way.

“Blue Velvet.” I was hoping they would do this. I spoke with King in December and he said they had recorded it and it would be on the vinyl version of For All I Care and on iTunes. I haven’t found it yet (after the show, King says again that it will be on iTunes so I’ll keep looking). Iverson plays high tink-tink-tink, tink-tink-tink triplets, that old doo-wop riff. Sung slow and dreamy, Lewis’s interpretation is velvet worn and frayed.

A strong drum solo opens U2’s “New Year’s Day,” another song not on the CD but recorded for vinyl/iTunes release. A lovely bass solo begins the Bee Gees’ “How Deep Is Your Love,” which I suddenly realize has decent lyrics. It has often been written that TBP deconstructs pop songs, but as I hear this slowed-down, stripped-down version, it seems they do something else besides: remove the studio-perfect sheen, the audio equivalent of Photoshopping, to reveal the real melody and lyrics. If a tune survives a TBP makeover, it has good bones.

On “Comfortably Numb,” the great Pink Floyd tune from The Wall, both Lewis and Anderson sing the chorus, his sweet voice twining with hers. Sighs of happiness all around. (Except for Mr. Drunk and Stupid sitting behind me, the audience has been wrapped around the band’s little finger since the first notes of the Stravinsky.) 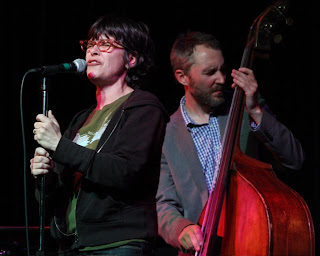 The final tune: Heart’s big, bad “Barracuda.” An opening pile-up: bass, then drums, then piano, and finally Lewis’s clean, clear voice. We want more and we’re the hometown faithful so we’re given two encores. First, Neil Young’s “Heart of Gold.” They’ve done this before, both without vocals and with (usually Anderson and King); tonight it’s Anderson with Lewis on high harmonies. After a soft a capella section comes a bashy instrumental end. Second, The Flaming Lips’ “Feeling Yourself Disintegrate,” which Lewis and TPB pare down to the basics, a gentle dissolution.

Another way the second half differed from the first, besides the singing: No talking, no stories. Just music. A bit of a different vibe but still pure TBP. Supposedly For All I Care is a one-off and their next CD will be all originals, no covers, no vocals. But I would welcome the return of Wendy Lewis. Especially on “Town Without Pity.”

They all hang out afterward, greeting friends and fans and signing autographs. Outdoors in the Cedar’s courtyard, fire dancers celebrate the relighting of the old theater's historic marquee.

Hear a mini-concert (“Lithium,” “Metal,” “How Deep is Your Love”) recorded live in the studios of KPLU radio, broadcast on NPR’s Session Spotlight on April 21, four days before the concert reviewed here. Read what Iverson says about TBP’s modern classical covers. As long as you’re there, click on over to YouTube to see three members of the Mark Morris Dance Group do their interpretation of the music, in short fringed dresses and high heels. See Wendy’s blog of her tour with TBP.

Posted by Pamela Espeland at 4:33 PM