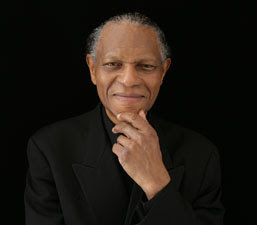 As McCoy Tyner’s current tour made its way to Minneapolis, I searched the Web and found reviews that let us know what we were in for.

John Fidler for the Reading Eagle (Berks County): “Tyner’s playing at 70 remains as explosive, as nuanced and, at the right moments, as tender as it was when he, Coltrane, Jones and bassist Jimmy Garrison ravaged the jazz landscape in the early 1960s.”

Jim Harrington for the Contra Costa Times (Silicon Valley): “The concert was certainly a highlight of this 10th annual SFJAZZ spring season…. The evening served as a strong testimony to Tyner’s great legacy as a songwriter.”

The Twin Cities turn out for the master’s first appearance here since November 2006, when he played the Northrop Jazz Season with a fantastic brass section (Eric Alexander, Donald Harrison, Wallace Roney, Steve Turre) that was somewhat underused. Before then, in March 2004, he brought Charnett Moffett and Eric Harland to the Dakota. Pyrotechnics in a much smaller space.

Tonight we hear two shortish sets divided by an intermission. (Toward the end of the first set, Tyner tells the audience, “I always listen to Gary Bartz and do what he says, and he says it’s time for a break!”) To start, a lengthy, expansive “Fly with the Wind,” one of Tyner’s tunes from the 1970s. (During which, alas, HH waited in the lobby to get in, having let me off before he parked. Brief digression to curse and rail at every single torn-up, backed-up, pot-holed road and freeway in Minneapolis.)

“Blues on the Corner” from the 1960s. Tyner comments, “I seem to have written many of my songs long ago.” I’m listening to a version right now, probably the first one recorded, from an essential Tyner album, The Real McCoy (1967). Joe Henderson plays the sax on the recording; tonight we hear the wonderful Bartz, a fiery sax player with a flammable cumulonimbus of hair.

Tyner turned 70 in December last year but his sound is still so huge, so thunderous and layered and mighty it’s like piano four-hands. How can he do it? In December he shared his secret with National Public Radio: Drink carrot juice.

“For All We Know” travels from tsunami to whisper. Tyner is glad to be back in Minneapolis and graciously tells us so. “I really enjoy playing for you,” he says. “I get a positive vibe.”

He doesn’t announce everything from the bench but I think the final tune of this set is Coltrane’s “Aisha.” [Correction: It's Tyner's own "Ballad for Aisha." Thanks to JS, whose comment is below.] He starts the next set with Coltrane's “Moment’s Notice.” In a wry aside, he explains that it was “written by a gentleman I used to work for who inspired my younger years and made it possible for my older years to be interesting.”

His quartet—officially a trio with Cannon and Gravatt; Bartz is billed as a special guest—is perfect, and Tyner gives each man plenty of room for extended solos. Cannon slaps his bass; Bartz soars into the stratosphere (and often carries the melody over Tyner’s thick cushion of notes); Gravatt matches Tyner in volume and velocity, laying down thick chords of his own on drums and cymbals. We hear an updated, speeded-up “Walk Spirit, Talk Spirit” with Bartz’s saxophone blowing the theme high and wide.

Here’s a recent video of “Walk Spirit, Talk Spirit” with the same personnel.

One encore: “In a Mellow Tone,” which Tyner really should rename if he’s going to play it. There’s nothing mellow about his version of Duke Ellington’s famous tune. It’s a summer storm rolling in over the fields, flattening everything as it goes.

Two candid photos from backstage after the concert, one Gravatt (L) and Dean Brewington (R), one with the lovely Charmin Michelle. 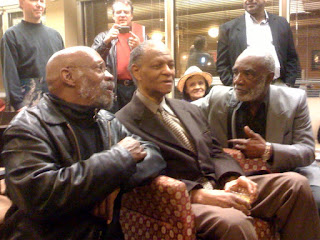 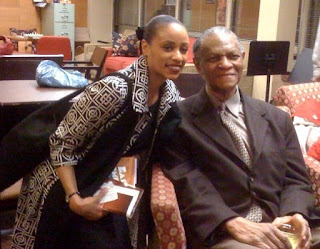 Read a preview on MinnPost where Tyner talks about the future of jazz and what's next for him personally.

Tyner has a big online presence at National Public Radio. Start with the most recent feature, recorded December 11, 2009 (during his 70th birthday week at the Blue Note).

Hear a complete concert from July 2008 with Dave Holland, Joe Lovano, and Lewis Nash. Find two more under “Related NPR Stories” at the bottom of the page.

Top photo from McCoy Tyner’s website. Backstage photos by John Whiting and his iPhone.
Posted by Pamela Espeland at 12:23 PM