Brad Mehldau at the Dakota: Something Good 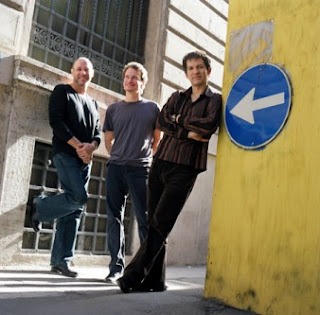 Where has Brad Mehldau been? Not in Minneapolis/St. Paul, where we haven’t seen him since 2002. Bad Brad! Please don’t make us wait another seven years for what we heard tonight: lyrical, emotional, telepathic piano trio jazz.

Mehldau doesn’t talk much on stage, and though I have heard a lot of his recorded music—all of his albums as a leader/solo, and several as a co-leader/sideman/guest—there’s much he plays that I don’t know by name, unless it’s a standard or pop tune. Tonight he waits until just before the set’s final song to tell us what we have heard so far.

They play for 90 minutes, opening with Mehldau's original “Dream Sketch,” not yet recorded. Mehldau explains that it’s an idea he had after awaking from a dream that “kind of worked. I was glad it didn’t turn out to be a coffee commercial from the 70s.” It is dreamy, and mellow. Then “Twiggy,” also unrecorded, a lovely blues with hints of “Still Crazy After All These Years.” (They’ll play that tune later.)

“Brownie Speaks” by Clifford Brown is Mehldau’s tribute to the bop trumpeter. He’s pleased when a horn player in the audience says the name before he does. The midsection is the audio equivalent of something bursting and shards flying in all directions. The melody is moving along when suddenly Mehldau plays a complex, utterly unpredictable rhythm to which Grenadier and Ballard stick like glue. That moment—and the remaining moments of a lengthy improvisation that twists and turns, starts and stops, each new thought a feint and a ruse—is a window into where this trio lives.

Mehldau describes “Wyatt’s Eulogy for George Hanson” as a “60s psychedelic eulogy” to a character in the film Easy Rider, which he says he has watched several times on planes (on his laptop, unless Dennis Hopper has a deal with the airlines similar to his contract with Ameriprise). “Psychedelic” is a good description for what sounds like a piece where, if there is a melody, it’s soon abandoned. Grenadier coaxes sounds out of his bass I’ve never heard before, running his fingers up and down the strings until they almost speak.

Bass and drums crash through the gate together for what Mehldau later tells us is “messing around with the chord changes to Denzil Best’s ‘Move,’” a tune born on a chessboard.

Then Rodgers & Hammerstein’s “Something Good,” from the movie version of Sound of Music (not, Mehldau clarifies, the Broadway musical). This is the song Maria and the Captain sing to each other when they realize they have fallen in love: “Nothing comes from nothing/Nothing ever could/So somewhere in my youth or childhood/I must have done something good.” Sweet, tender, Mehldau’s version conveys that sense of wonder and gratitude and joy.

He ends with a solo piano rumination on the melody. Times like these divide Mehldau listeners into two camps: those who consider these detours poetic, meditative, and uplifting, and those who think they’re self-indulgent, soporific, and noodley. I confess to being fascinated. You know he’s making the decisions but it seems as if the music is leading him. Or that he’s channeling some musical spirit. Maybe he’s noodling, maybe he should get back to the business of the melody, but I’m happy to follow him into the woods or down the winding path or off the cliff. This is music of deeply-felt passion and emotion.

When he does eventually find the melody again, Ballard picks up his brushes, Grenadier places his fingers on the strings, and they end together.

Encore: “Still Crazy After All These Years.” A Paul Simon song Mehldau recorded in 2002 on Anything Goes with his trio at that time: Grenadier on bass, Jorge Rossy on drums. Until now I have only heard him play live with Rossy. I’ve read reviews calling Ballard a more energetic and powerful drummer than Rossy; one writer feels that Ballard crowds Mehldau. (Nate Chinen of the New York Times thinks the results are “salutary, like drawing the curtains to let the daylight in.” He also calls Ballard a “much more loamy percussionist” than Rossy, whatever that means.) It would be interesting to know why the change was made after so many years and recordings together. My focus is mostly on Mehldau when I hear his trio play but the drums do seem bigger and denser with Ballard, less finely drawn.

The trio returns for a second encore: “Monk’s Dream.” Mehldau comps little trinkle-trinkles behind Grenadier’s bass solo while Ballard brushes his high-hat. I haven’t heard too many jazz players improvise on Monk—it seems hard enough to play him straight—but off they go into a long melodic improvisation that builds in layers and intensity and playfulness, with Ballard taking a series of small solos. It’s a terrific finish to the evening.

Both sets tonight were open curtain, the audience spilling over into the Dakota’s restaurant side. I heard the first set did and didn’t sell out. Ours didn’t though the crowd was healthy. Compare to what Will Friedwald wrote for the New York Sun on January 25, 2008: “Meanwhile, down in the Village, the line stretching down Seventh Avenue, all the way past the Psychic Reader and up to the front of Fantasy Lingerie, can only mean one thing: Brad Mehldau is at the Vanguard.” If lines formed to see jazz artists play here, we might not have to wait seven years between Mehldau sightings.

Photo from Nonesuch website. Photography wasn't permitted during the performances.
Posted by Pamela Espeland at 2:55 PM