Eric Bibb at the Dakota: Blues of hope and loving kindness 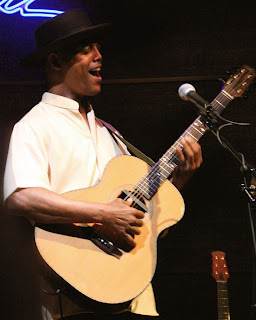 When bluesman Eric Bibb came to town last year, I went to see him because a friend wanted to go. I still think about that performance and how wonderful it was. Tonight is wonderful, too, but in different ways. Last year had the element of surprise. This year Bibb seems more at home in the room, more relaxed and easy. Happier.

Hope, loving kindness, happy—words not usually associated with the blues. Yet except for the opening song, “Stagolee,” not a shot is fired or a lover betrayed. Bibb calls his music "upside-down blues" because it's about life's joys, not life's problems. It's sincere and satisfying, not at all saccharine.

We also hear many songs Bibb didn’t bring us last time around. (As before, he owns the whole night at the Dakota, two generous sets with a short break between. Tickets are for both sets and tables aren’t turned.) He precedes every song with a story, drawing us closer.

“New Home,” he tells us, is a song he performed in Seattle the night Obama was elected. The lyrics fit: “I’ll put your feet on solid ground by and by/When the river gets to rising, you’ll be high and dry.” His “Pockets” is a love song, first recorded on the Swedish audiophile label Opus 3. (Bibb lived in Stockholm for ten years; he makes his home in Finland now. He hasn’t lived in the states since 1985.) “Saucer ’n’ Cup” is also a love song (“You’re looking at a satisfied man”), and he sings it for friends in the house who are celebrating their 35th anniversary. “Marital bliss is not a big blues theme,” he says wryly by way of introduction.

He prefaces “River Blues” by saying “Here comes the other side of that coin” (everyone laughs), “a song I wrote after the umpteenth time of realizing sometimes it’s better to take a walk than try to talk.” Does the man give lessons? (That was not meant for you, HH.) “Going Down Slow” is one of the few songs we hear that isn’t a Bibb original. Written by St. Louis Jimmy, who played piano for Muddy Waters, it’s sadder, bluer. (“I don’t need no doctor/He can’t do me no good….”) Watch it here. Video quality poor but song a classic.

Bibb has an essential sweetness and optimism about him; his smile is radiant, his ways gentle. He seems open and genuine, not shiny and false. He can't possibly say something completely different every time he introduces a song, but his words never sound like the same old patter. Sometimes he ventures into blues shouts and growls and he’s convincing there as well. But he seems overall like the satisfied man of which he sings, talking affectionately about his son, Sebastian, and his own mother. “She says to never leave this song off my set list,” he says before playing and singing “Don’t Ever Let Nobody Drag Your Spirit Down.”

We hear “Panama Hat,” “Right on Time” (a tune that grew out of the generosity of older musicians), “Sebastian’s Tune” (“I told my son I’d play it every time I was missing him on the road”), “The Needed Time.” Like last year, the crowd is attentive, respectful.

What must it be like to come through a curtain onto a stage, face a crowd, and put it all out there: your voice, your personality and emotions, your words and melodies and musicianship? A singer-songwriter is a courageous person, like a solo dancer must be, or any solo musician, or an actor in a one-person show, or a poet giving a reading. In the end, they're all tightrope walkers. Bibb does more than sing songs and play guitar. He lifts us up.

While he was here in Minneapolis/St. Paul, Bibb spoke with Dale Connelly and performed three of his songs in the Minnesota Public Radio studios. Listen here.
Visit his new website, learn more about him, and hear a few more songs.
Read about last year's show.
Photo by John Whiting.
Posted by Pamela Espeland at 2:23 PM