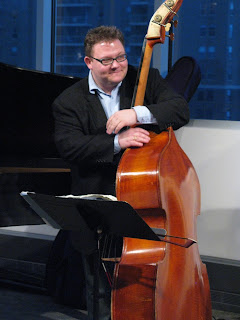 Bassist Adam Linz (Fat Kid Wednesdays) has been tapped to head MacPhail's jazz program when Kelly Rossum leaves for NYC at summer's end. Read about it on MinnPost. Here's more from our interview.

PLE: Who were your influences?
AL: Those players that kind of blurred the lines between playing a lot of different stuff—somebody like Gary Peacock, Henry Grimes, Charlie Haden, Dave Holland definitely. Also I'm a big fan of Andy Simpkins, who played in the Three Sounds. And I was a fan of the lesser-known players...Israel Crosby, who played with Ahmad Jamal for a long time. I wasn't a kid who was like, there's Ray Brown and Larry Grenadier.... I kept my distance from the normal.

PLE: When did you start playing?
AL: I was a late starter. Electric when I was 16, double bass when I was 19. I grew up on rock and roll. When I was a really young kid, I saw a couple of band videos where the guitar players all had black guitars and the bassists all had white basses. I wanted to play the white bass. People thought I should be a guitar player; they thought my hands were too thick and chunky to play guitar. But my uncle was a bass player and the bass player seemed like the hippest player in the band..... I got into music through hip-hop, rock, and metal. The first three cassettes I bought were Run-D.M.C.'s "Raising Hell," Van Halen, and "Miles Davis: Greatest Hits." I definitely as not a musical kid. I did other things. I was in all kinds of sports, karate, BMX racing, skateboarding. I came to study music late in life but to appreciate it a lot earlier. I still have a huge record collection. I'm a listener.

PLE: What are you listening to lately?
AL: Today, a Gary Peacock/Bill Frisell duet record called "Just So Happens." I've been listening to this great singer/songwriter Sam Amidon, "All Is Well." He's on a label out of Iceland called Bedroom Community. The arrangements are lush. It's one of the best records I've heard all year.... An electronic duo from japan called Tennis Coats. They're awesome. I've been listening to Eliot Carter, the classical composer. Just his first symphony. I've been listening to the last Jim Black No Access record, "Dogs of Great Indifference." It's on the Winter Winter label.

PLE: You're following Kelly Rossum as head of MacPhail's jazz program, but I'm not going to ask the hair question. [Rossum famously wears a mohawk. Linz has a regular haircut.]
AL: I had dreads for twelve or thirteen years. I cut them off and sent them to Atlanta so the cancer society could make a dreads wig for this lady.

PLE: Free jazz, avant-garde jazz, left-of-center jazz.... What do you call it?
AL: Just playing for me.
Posted by Pamela Espeland at 7:00 AM