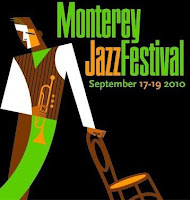 What's not to love about the Monterey Jazz Festival? Go more than once and the experience becomes cumulative. Not only do you have last year's memories to savor, you also have next year's lineup to look forward to. And when it's announced, it never disappoints.

Three cheers for MJF/53, to be held September 17-19 on the sweet fairgrounds of Monterey-by-the-sea. Hurray for the sheer, mind-boggling quantity: 500 artists on 7 stages for 85 performances squeezed into three nights and two days. No one sees them all, except maybe Forrest Dylan Bryant. Bravo for the quality, including 9 artists/groups making their Monterey festival debuts.

Is it really possible that the great Ahmad Jamal is playing this festival for the first time? (That Trombone Shorty is new this year I can understand--he's still a kid.) Has Harry Connick truly never made his way to Monterey? All I ask is that he not make this part of his Your Songs tour. Please, Harry, I'm begging you, don't sing "Close to You." Give us some of that New Orleans sugar, swagger and stride. Make us swoon.

Who else? Dianne Reeves is this year's artist in residence. Works for me, because I want to know her much better than I do. Roy Haynes, the dapper dresser and ageless wonder, will be there with his Fountain of Youth Band. (Jaleel Shaw, I hope that includes you.) Angelique Kidjo will perform with a band that includes Christian McBride, Lionel Loueke, and Kendrick Scott. Whew. Roy Hargrove will bring his big band. Nellie McKay will channel Doris Day--or not, depending on her mood. Whatever she does, she'll delight and confound the crowd. She's a one-woman variety/cabaret show.

More? The Freedom Band with Chick Corea, Kenny Garrett, McBride and Haynes. Rudresh Mahanthappa's Indo-Pak Coalition. The inestimable Marcus Roberts and his trio. Jake Shimabukuro, ukelelist extraordinaire. The Chris Potter Underground (with the splendid Craig Taborn, the pianist/keyboardist named most often when I ask jazz musicians, "Who are you listening to?").

And that's not even everyone and everything, and we haven't talked about the food. Or the unique and palpable charm of the place and the people. Moonlight in the open-air arena, and planes flying low overhead. The Flyswatter Lady. Paul Aschenbrenner in his moose hat. Tim Orr on his bike. Clint Eastwood strolling by. The smell of the ocean, the mist in the air.

There are still many jazz festivals out there, thank goodness. Someone I know attends the North Sea festival each year. Wish I could go. The New Orleans Jazz & Heritage Festival is high on my list. I've been to Montreal and would love to return (though it's pricey; almost everything worth seeing is ticketed). I'd like to see Newport. Dear Jesus, please send me to Perugia someday. But until I win the lottery and can spend my life traveling with HH from festival to festival, he with his camera and I with my pen, make mine Monterey.
Posted by Pamela Espeland at 7:05 PM