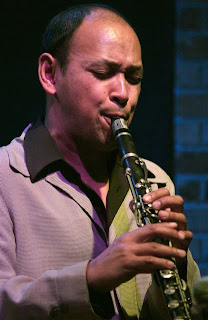 So now you are known as a New Orleans-style, Creole-style clarinetist. That’s how everyone talks about you and how you present yourself. Does it ever feel like a trap?

No, because in 2006 I intentionally branded myself that way. I started to do that even before the storm, but I was more aggressive about it starting in 2006.

I want to make sure people are aware that what I’m doing is related and relevant to New Orleans. I’m trying to be an advocate for that language. I had to find a way to explain it better so that my identity was more explicable.

Most people’s understanding of New Orleans traditional jazz is so narrow that I wanted to find a new way to make sure that I got different gigs, or that other musicians didn’t make presumptions about what I did. So part of it was a strategy to make me not look like I was in some kind of box.

I also I had to find a way to get around the fact that for traditional music, you find a demographic that’s not as much fun to hang out with. So part of the Jazz Traditions Project was simply trying to find an aesthetic that would lead us out of only playing for old people.

It wasn’t some kind of artistic decision. It was more of a survival technique, like switching from saxophone back to clarinet was a survival technique. One day in university, I realized that there’s way too many freaking saxophone players out there. I started getting calls to do clarinet things, and it was my first instrument, so once I started taking it more seriously, I thought, well, I’ve just eliminated so much competition that I may just stick with this.

Talk about your own composing. What are you trying to do with your compositions?

Finding new ways to frame the music has to go beyond jazz clubs and concerts. I started writing a little bit for chamber orchestra for a project in California, and that got me excited.

There’s a group called the Seahawk Modern Jazz Orchestra out of Idyllwild [California], put together by one of my teachers, Marshall Hawkins, the bass player. [Hawkins leads the jazz department at Idyllwild Arts Academy, which Christopher attended.] Every summer they have a music festival with a chamber orchestra concert that blends jazz and classical in different ways, or uses the orchestra to frame certain aspects of improvised music. So every time I’m able, I try to write something for them.

I’m gradually getting more into the idea that there’s vocabulary in New Orleans music that can be used in those forums, and I feel I’m onto something new. It’s been done in the past by composers like William Grant Still, people like that. But nobody today is doing too much with it.

I’m trying to find ways to have elements of that vocabulary present. Even if it seems kind of hidden. For example, I’ve been cataloging the way that the modern brass bands use harmony, meaning the way three trombone players improvise something in the modern [New Orleans] brass band. I’m trying to catalog the way they harmonize with each other.

What do you mean by “catalog”?

You spent almost three years with the Jim Cullum jazz band in your late 20s. Would you like to talk about that?

That was when I switched to the Albert System [of clarinet fingering], so it was great…. It was an interesting time. I had been in New Orleans for a couple years and was actually dissatisfied. I felt like I had run out of things to do. I hadn’t taken responsibility for having my own projects. The phone would ring, I would do things, I got to do a variety of things, but I got bored pretty quickly…. I couldn’t do the Cullum band more than two and a half years. I got very accustomed to what was going to happen next. When there’s not new information, I have to move on.

I found an old web page from when you were in the band, and even then you had ideas about the music. Here’s what you said: “My goal is to maintain the integrity of early jazz styles, its structure, but move forward so that it's speaking to an audience of today instead of being something bottled and preserved."

I think I’ve been saying that from the very beginning. It’s not like one day I wanted to do repertory and one day I didn’t. As soon as I became interested in this music, I knew I didn’t want to play in bands that were trying to re-create something.

Talk about [drummer] Shannon Powell. You’ve mentioned his name so often that I get the sense he’s important to you and to the music.

He’s one of the best drummers in New Orleans, and a perfect example of someone who has a deep passion for the tradition but doesn’t feel an obligation to be in a box in the way that he uses it. He’ll use it when it’s appropriate, but if he’s just making music creatively, you’ll hear the history of New Orleans drumming in his playing. You’ll hear everybody from Baby Dodds to Ed Blackwell. It’s all in there. He strongly represents his own neighborhood, his own community of the Tremé, in his drumming style.

New Orleans is a fascinating place for that reason. Neighborhoods have their own musical accents, like a linguistic accent… The difference between Herlin Riley and Shannon Powell is a distinction that’s very much rooted in the neighborhoods. The distinction of the 6th ward versus the 9th ward.

How did you figure that out?

Scholarship and research are important to you.

I didn’t have what Shannon had when he grew up. He sat behind Cie Fraser. He knew these musicians. When I got to New Orleans, there were no living clarinet players playing in the New Orleans style. The last one would have been Willie Humphrey, who died months before I got there. After that, there wasn’t anybody performing in New Orleans that I was terribly interested in.

So you went into the archives at Tulane University. You’ve said that was like “taking lessons from ghosts.”

Sometimes in those oral histories they’re actually performing on their instruments, they’re describing the way they did things, the jobs they had, how they got to them or why they did them. Those are the things I would have loved to have asked musicians I knew personally, but there weren’t any.

You’ve said that a lot of your mentors died when you were in Paris.

Are you feeling that you’re taking on some of that role?

I had to look at it that way because I was too old to feel sorry for myself. Like, I’m the abandoned kid…. It’s not that way. The circle’s turning.

So now you’re it.

There’s a trumpet player friend of mine, we’re in kind of a similar situation. We’re both 40 and we’re trying to figure out why there aren’t a bunch of young cats in their twenties wanting to do what we’re doing, or trying to get a handle on it. Why aren’t they asking us for the recordings that we got from musicians and friends who are now maybe 10 or 20 years older than us?

You’re a seeker. Do you think the path you’re on will hold your interest?

Figuring out how to play the clarinet in a New Orleans way and have it get gradually farther and farther away from instantly having the associations of being traditional…and yet, at the same time, have it be understood as being from that—that’s a really fun challenge. There’s irony, and there’s a degree of subversion. I find myself trying to thumb my nose at what’s a more dominating aesthetic in the jazz community.

I wouldn’t know how to describe it exactly, but it’s a little bit more of the stare at your shoes mentality, the I-don’t-care-if-you-have-a-good-time-listening-to-your-music mentality. New Orleans insists that on some level you have a good time.

Hear a complete concert by the Evan Christopher/Tom McDermott Danza Quartet, broadcast live from Donna’s Bar and Grill in the French Quarter on New Year’s Eve 2009.

Photo of Evan Christopher by John Whiting
Posted by Pamela Espeland at 12:55 PM