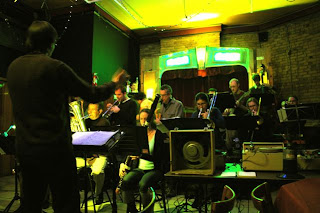 When: Wednesday, February 24, 2010 • Where: Bedlam Theatre • Who: Symphonic Transients Orchestra

I’ve heard Stefan Kac (say “katz”) called a “mad genius” and that shoe seems to fit. I first became aware of him during a jam session at the Artists’ Quarter, maybe in 2005, when he walked onstage with his tuba and started to play. In February 2006, he performed with his group Pan-Metropolitan Trio at a Dakota late-night show.

Then came the group Ingo Bethke in 2008, Kac's trio with Adam Linz and Pete Hennig in 2008, his quartet with Sean Roderick, Josh Granowski, and Nick Zielinski, the group Bronco Vision with Brandon Wozniak, Anthony Cox, and Jay Epstein, and journeys into free jazz/improvised music with Milo Fine at Homewood Studios.

And there are the projects I haven’t yet heard, like the Copper Street Brass Quintet. Earlier this week I was talking with Dick Parker, a member of the Mouldy Figs, and he asked, “Do you know Stefan Kac”? Apparently Kac also plays with this trad jazz band and others.

It’s a big band, sort of, whose personnel will vary (depending on who’s available), playing original music “for the listening pleasure of an audience, nothing more and nothing less.” It “does not provide musical accompaniment to events, ceremonies, or theatrical productions, nor do we perform in an ambient capacity whereby our life’s work is presented specifically for the purpose of being ignored.” 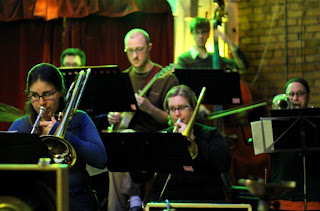 The debut took place in the Bedlam’s Fireside Room, where half the space was taken up by the 13 musicians who had come to play. Kac was hoping to attract an audience to outnumber the band; I think he succeeded because it got pretty crowded in there. We managed to find seats but most people stood before the curtain that divided the room from the bar on the other side. All of the compositions this time around were by Kac. Admission was voluntary, by tip jar.

It’s so rare these days to hear a large ensemble live that Symphonic Transients Orchestra gets props for that, for starters. Among the 13 musicians were many I had seen before in other configurations, some leading their own bands—strong players with their own voices. The night’s lineup:

Too bad Kac couldn’t play; he was busy conducting his music. Big music with lots of horns (seven horns, plus flute and bassoon) that filled the small room. Everything was tightly composed, with windows that opened up for improvisation. The musicians looked as if they were working hard and the music was tricky to play. I heard complex rhythms, interesting melodies, and pleasing juxtapositions—like flute with bassoon. One piece, Double Quintet, seemed to consist mostly of the same note and brief phrase that floated from section to section. There were moments when classical met jazz and took a turn around the floor. It reminded me of no one and nothing; it was itself, and I enjoyed it.

I like the whole idea of this project, and the fact that it exists. I hope it can continue. We have the JazzMN Big Band, with its annual concert series and its skilled and effective board of directors, and long may it survive and thrive, but this is something different, maverick and rogue. Playing where it can, when it can, with whom it can, for whomever shows up. A flash-mob band, but with rehearsals.

More on the music (from the website): “All works are composed with a flexible instrumentation in mind per guidelines established by the Consortium for each project…. Works are composed to function as single movements of a larger work called a Series. The movements may be stylistically diverse, and may be performed in any order desired to form suites of varying length.” At the debut, we heard F-1 (from the “F”) series, Passacaglia, Checkpoint Philosopher, D3, D1, D2, and D4 (all from the “D” series), and Double Quintet. All music is available for download from the site.

The day following the performance, I sent Kac a few questions by email and he kindly responded. 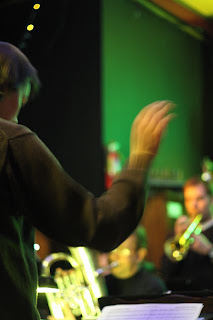 Did you choose/invite the musicians for last night’s performance?

We currently have a pool of about 25 people, all of whom were invited. The musicians who performed last night were the ones who were able and willing.

Were you pleased with last night’s performance? If yes, why? If no, why?

Yes. We could have used more rehearsal, but no one was tentative. That's what it's all about.

Mostly happenstance. Paul Fonfara, who is one of my colleagues at WBSM [the West Bank School of Music, where Kac teaches], has a band called Painted Saints that plays there on alternate Wednesdays. As they were planning to take the week off, he offered me the gig and suggested that I bring the orchestra.

Are you modeling this orchestra/effort on anything else out there? Maybe Maria Schneider or Darcy James Argue or Dave Holland’s Big Band or Carla Bley or...???

To my knowledge, none of those bands works the way this one does. [Argue's] Secret Society is probably the closest, but I believe that their instrumentation, like all the other bands you listed, is fixed. In other words, they might show up to every gig with a slightly different group of people, but they always have 5 saxes, 4 trombones, etc. Conversely, we might show up with only saxes one night and only trombones the next. It sounds like you've already read my manifesto, where I outlined the many reasons I have (both practical and artistic) for doing things this way. I don't have a specific model, though I'd be shocked if someone somewhere wasn't doing something similar.

In the announcement email you sent, you described the program as “original symphonic music.” To me, that implies classical/contemporary classical. It was composed; there wasn’t a lot of room for improvisation, but there was some improvisation. Care to comment?

By “symphonic” I simply meant “big.” I tend to think of it as a style-neutral term even if it’s really not.

Re: improvisation, I’ll probably get myself in trouble by saying this, but here’s the deal:

There’s a line of thinking out there that improvised music doesn’t require any rehearsal, and that it doesn’t really matter what happens. I don’t subscribe to that line of thinking, but many many people do, and so the tighter peoples’ schedules and wallets get, the more people suddenly find the urge to play free. As a result, there’s no shortage of opportunities to play and hear improvised music right now, but there’s a pretty dire shortage of “new music ensembles” playing through-composed music by living composers, which requires more space, time and people than anyone seems to be able to pull together consistently at the moment. This project is all about filling that void. You know that I’m also heavily invested in (real) improvised music, and happily, those opportunities are plentiful at the moment. This project is my way of finding a balance, and I aspire that it might serve that very same purpose for the other musicians, and for listeners too.

More gigs like this one, more musicians brought into the fold, and more new music written not just by me but by the many other players in the pool who are also composers.

So I don’t have to try and fail, can you sum up your “About” document into a much shorter statement of purpose? What is this thing about?

Was there anything in particular that made you think of this/start it?

There's too much talent going to waste in this f#$%ing town. The music scene is cliquey, parochial, and petty. Musicians don’t get together in large numbers because it’s too inconvenient and expensive. They have no outlet for their large ensemble compositions because pro orchestras won’t play them and community groups can’t play them. Fixed instrumentation excludes too many worthy participants from music making. I could go on, but you wanted something shorter.

Photos by John Whiting. It's dark in the Bedlam.
Posted by Pamela Espeland at 1:35 PM