And wants nothing else.
Cravings torment the heart:
He renounces cravings.
I call him illumined.
Not shaken by adversity,
Not hankering after happiness:
Free from fear, free from anger,
Free from the things of desire.
I call him a seer, and illumined. 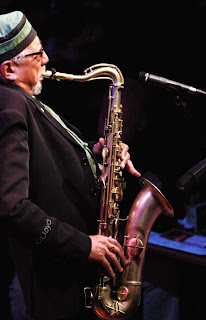 For the final song in last night’s second set at the Dakota, Charles Lloyd pulled up a piano bench beside Jason Moran’s chair, brought the mic close, and quoted a lengthy section from Christopher Isherwood’s translation of the Bhagavad Gita from memory (portions above). It made perfect sense in an evening of musical meditation.
Over the years, I’ve seen Lloyd several times—at the old and new Dakota; at the 2006 Monterey Jazz Festival; at UC Santa Cruz, where I traveled last December for a conference on improvisational music, in part because I knew he would be there. But I’ve never seen a performance as subtle, understated, and nuanced as last night’s.
Lloyd and the other members of his quartet—newly minted MacArthur fellow Moran on piano, Reuben Rogers on bass, Eric Harland on drums—filled the room with music and a profound, almost ethereal calm. They played a lot of notes, often very quickly—Lloyd can take the first phrase of “Monk’s Mood,” for example, just 12 notes, and turn it into dozens more—but without urgency or excess. Early in the set, a thought came to mind: When you speak quietly, people lean in to listen. I have rarely heard the Dakota as quiet as it was during this performance.
Lloyd would play, then sit at the side of the piano while his trio played, surrounded by their music, their communication and interplay, like the eye of a storm. He gave them a lot of room, and why not? Each is an artist of depth and inventiveness. What drummer plays a lengthy solo during the first song of a set? Harland did, interspersing feathery rimshots with pops and thuds. Rogers’s beautiful solos on the acoustic bass hummed and sang. Even Moran, the restless young innovator whose music can be full of sharp turns and edges, seemed centered in stillness. His solos were delicate and restrained, while his comping was almost a whisper, one you leaned in to hear. 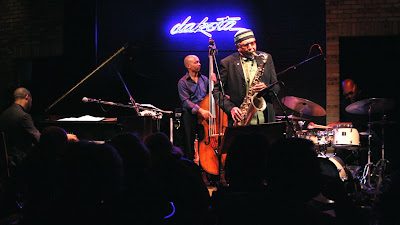 When Lloyd played, each passage was a torrent of ideas, a saxophonic language with words you understood not in your head but in whatever you want to call it—your heart, your spirit, your soul. (For this set, he played just the tenor sax, no flute or Tibetan oboe.) The only spoken words were those from the Bhagavad Gita, the sacred “song of God,” during which Harland hummed like a Tibetan monk, rumbly and low.
Lloyd wrote on his website: “Music is a healing force. It has the ability to transcend boundaries, it can touch the heart directly, it can speak to a depth of the spirit where no words are needed.” That’s what I felt. Others did, too. I heard it in conversations after the show, read it in emails and postings later. People were moved by this experience, and uplifted. It’s rare these days to feel uplifted and not wonder later if you’ve been manipulated or gulled. So much popular music is about packaging, branding, and gloss. This was the real thing, ravishing and rapturous, neither entertainment nor diversion but something more substantial: spirituality, emotion, gift. It was the jazz version of an audience with a great teacher. The church of Charles Lloyd. After which, incredibly, he thanked us.
Here's what we heard in the 90-minute second set:
“New Blues" (with Harland's wonderful solo)
"Monk’s Mood” (a sweeter, more tender version than on the new CD, "Mirror")
“Dream Weaver" (Meditation/Dervish Dance) (so many notes, not one too many)
"Passin' Thru" (why hasn't Lloyd ever recorded this on one of his own CDs as leader? He plays it often enough)
"Mirror" (pure gossamer)
"Forest Flower: Sunrise" and "Sunset" (the last time I heard Lloyd play "Forest Flower," Geri Allen was at the piano)
“Tagi” (the Bhagavad Gita piece)
_____
Thanks (once again, and not for the last time, I sincerely hope) to John Scherrer, who tipped me on the Bhagavad Gita and most of the set list.
It’s not entirely true that the only spoken words were from the sacred “song of God.” Lloyd did not address us from the stage—he didn’t introduce his band members or tell us what he was playing or mention that he had a new CD for sale. He did, however, express displeasure with an audience member who called out a request, and ask another who had been shooting video with his camera directly in front of him for most of the night to stop (“No more, brother”). Please, people, show some respect. Please, club owners, set some ground rules—fair and reasonable ground rules that permit nonintrusive photography (no flash, no bounce light, no standing in front of the stage) when the performers allow it. HH took the pictures included here but he wasn't a jerk about it.
Photos by John Whiting.
Posted by Pamela Espeland at 11:13 PM