Shortly before leaving for Jekyll and Hyde Come Alive at MacPhail, I saw a facebook posting from drummer Tim Glenn for “An Evening of Transparent Radiation” at a place called the Whiteroom on Jackson Street. Lights and production by Wonderhaus, sounds and drone by DJ Overzealous, three bands: Delta Lyrae, Crux, Dallas Orbiter.
It was Crux that pulled us there: George Cartwright, Andrew Broder, Tim Glenn. Cartwright, a saxophone and improvising monster, once a fixture in NYC at the Knitting Factory and now living in the Twin Cities, plays out too seldom (and updates his online calendar even less often, hint). The last time we saw him, at the Acadia with Davu Seru and Josh Granowski, the music was good but the room was bad. The new Acadia has shoved its stage into an acoustically crappy corner, and the people who sat directly in front of the stage were disrespectful. They behaved as if the three musicians playing their a**es off were a television someone had left on by mistake, so it was okay to laugh and talk loudly and carry on.

Back to Crux: Since we didn’t get out of MacPhail until after 10, I thought we might be too late, but we arrived just in time for their set.

I’ve seen Cartwright play with Broder before, as part of Gloryland Ponycat and also in “Bonanza: The Musical.” And I’ve seen Tim Glenn with the Rossum Electric Company and Park Evans. The three together were new to me. 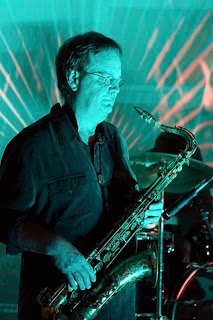 They got right down to business, with Cartwright on his tenor sax (he later switched to alto), Broder on his electric guitar of many pedals and personalities, and Glenn all over his drums.

I’m a big fan of Cartwright’s tone. I’m not sure how to describe it, but these words come to mind when I try: Big. Soaring. Strong. Dimensional. Glorious. (Also, when I listen to earlier Curlew recordings, Nail through Head, Riot in Streets, Flash Flood, Armageddon, Hummingbird in Drapes.)  His playing is free and imaginative, generous, joyous, and completely unpredictable. Hearing it makes me happy. It always has.

The music grew to fill the room. At some point it settled into a deep groove carved out by Broder’s guitar that seemed almost trancey, except it felt as if my internal organs were being rearranged. Then it broke apart and flew in all directions while staying together.

I'm calling it jazz but it could just as easily have been rock and roll. If the poster had called it "jazz," fewer people would have come.

While Crux played, images flickered over the walls and ceiling. Someone had brought a fog machine, which occasionally belched a thick white cloud that temporarily obscured Cartwright and Glenn before breaking into little poofs and threads.

On the floor in front of the band was a small silver metal ball that turned on a stand. It glowed and pulsed and shot thin laser-like beams into the air. Didn’t Yoda use something similar to train young Luke Skywalker how to use a lightsaber? 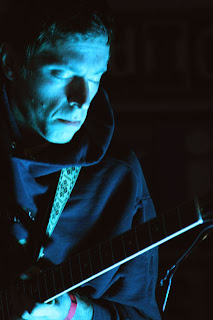 The Whiteroom is a big, white room, home to a catering company located in a part of NE Minneapolis that houses many artists’ studios. Xelias (ex-elias) Aerial Arts, founded by Meg Elias-Emery (Cartwright’s sister-in-law) is in the same building; the exceptional blacksmith Lisa Elias (another sister-in-law) is across the street.

Within the Whiteroom, the back is a kitchen but the front is open and spacious. There was a single sofa but no chairs. People stood around. It cost $5 to get in and you had to wear a wristband because beer was sold. Most people there were in their twenties, maybe thirties, including the tall warrior princess who stood right in front of me, thanks very much.

From talking with Cartwright’s wife Anne Elias, we learned that the Transparent Radiation evenings were formerly held at the Bedlam Theater, which has since closed. They’re trying out this new space. It seems suitable and hospitable. Chairs would be nice. 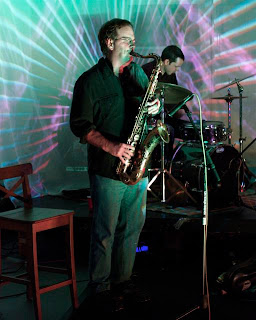 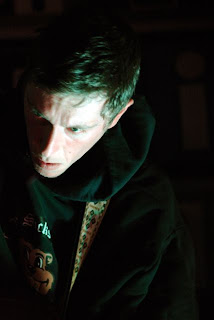