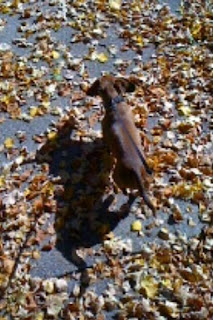 Carmen, our effervescent, joyous little dachshund, died suddenly this week from IMHA, Immune Mediated Hemolytic Anemia, despite the best efforts of the kind and caring doctors at the University of Minnesota Veterinary Medical Center to save her.

This evil disease strikes suddenly, with no known cause or cure. Carmen had just turned 7.

She was still her puppy self last Friday before she died. John took this picture earlier that week on one of their regular morning walks. It was a bright, beautiful day and she was happy. She was always happy, and she made us happy, and we're grateful to have had her in our lives.

We brought Carmen home in January 2005. In December I wrote this essay for Minnesota Monthly.

We met her at a dog show in St. Paul. Skirting herds of giant poodles and flocks of Bichons, we went looking for miniature dachshunds—wiener dogs. We had two at home, both old and one ill, and were in the early stages (we thought) of finding a breeder from whom we might buy a puppy. Soon a small red dog was nestled in my husband’s arm. She tipped back her hound head and looked him in the eye. Then she tucked her nose into his armpit.

She wasn’t a puppy; she was a 15-month-old daughter of champions who’d had her turn in the ring and was about to be retired. A teenager. Housebroken, socialized, accustomed to the car, the crate, and the leash, and less likely than a puppy to gnaw chair legs. It was an option we hadn’t considered. We told the breeder we would mull it over. The next day, our littlest dachshund died. Two weeks later, we brought the new dog home. She slept on my lap in the car the whole way—portable, adorable, softly snoring.

In the interim, friends had asked, “Are you sure you want another dog?” The subtext being, “Your children are grown. Young dogs are a lot of work. Are sure you’re up to it?” We were. The timing seemed fortuitous. We have home offices, so we’re around. We know dachshunds; this would be our fourth. Our main concern was how the young dog and our old dog would get along. We were told that the young dog was respectful toward her elders.

Her name was Karma. But we call her Carmen, after Bizet’s tragic opera heroine, the banana-hat-wearing Brazilian bombshell, or the jazz singer, depending on who asks. At home, she’s the Red Rocket--or the Red Menace, Coppertop, Crab Cake, Junior Mint, Pop Tart, Pimiento, Smallpox. She answers mostly to Cookie, Supper, and Walk.

Lily, our old dog, is a creature of placid habits, led by sleeping. Carmen is nine pounds of spring-loaded action whose favorite chew toy is a Pizzle Stick—a dried bull penis. (The breeder kindly gave us a couple to start with. They’re stinky.) In the first few months, Carmen jumped on the coffee table and stood there wagging her tail. She shredded the edge of our dining room rug. The dog bed that lives in the corner of the kitchen was found upside-down in the den. I caught her with a Stuart Weitzman boot and saved it; I wasn’t as lucky with the Cole Haan sandal. She barked at Tim the mailman, at passersby, at thunder, at car doors closing, at the sound of the newspaper hitting our door at 6 a.m. She peed and pooped on the floor. If we didn’t power walk her at least twice a day, she drove us crazy. Her greatest desire was to murder a squirrel. Every evening before dinner, she got the zoomies, running in wild circles through the house.

Lily snapped out of mourning and into survival mode, which meant staying out of Carmen’s way. I didn’t know dogs could make the oof sound; body-slammed by Carmen, Lily can. Within a week, the two were touching noses, then sleeping like spoons. Lily seems younger every day.

The breeder said that if Carmen didn’t work out for whatever reason, we could send her back. We joke about putting her on a Greyhound to South Dakota, but we’d never let her go. One long leap lands her on my lap, where she’s almost always welcome. She still does the nose-in-the-armpit thing. She knows how to work a room. She sleeps in bed with us, burrowed under the covers. In the morning, she emerges, licks our faces, rolls on her back, stretches, and groans. She is not an early riser. Pizzle Sticks have been replaced by chewies, tuggies, bouncies, and the loofah dog from PetSmart’s “Where’s Bobo?” commercial. I hoped the toy dog would last five minutes; it was gutted in three and we were out six bucks. Our life is set to a soundtrack of squeaky toys. We laugh a lot. We never leave shoes unattended on the floor.

On our daily walks, we often meet people who stop to pet Carmen and reminisce wistfully about dogs they once had. Now, they claim, they don’t want to be bothered with dogs anymore. Their kids are grown, they travel too much, they have new carpet, they live in a condo, they’re through with dogs. I nod. I sympathize. I can certainly understand.

Email ThisBlogThis!Share to TwitterShare to FacebookShare to Pinterest
Labels: Carmen