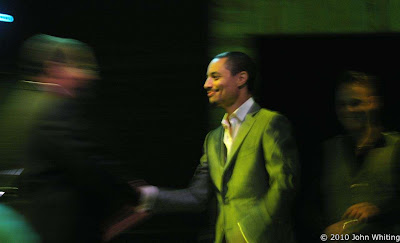 Earlier this year, while backgrounding José James for a piece I was writing, I came across a video of him singing lyrics to John Coltrane’s “Resolution.”
Until then, the only singer I knew who had tackled this gorgeous beast was Kurt Elling, whose vocalese version (with his original lyrics) sends chills up my spine each time I hear it.
But there was James, singing “Resolution” with different lyrics, and killing it.

What was the story?
In 2006, James made a demo EP that included two original songs (one was “The Dreamer”) and three covers of songs by Coltrane: “Central Park West,” “Equinox,” and “Resolution.” He brought copies to the UK when he went there for a jazz competition, and one ended up in the hands of Gilles Peterson of Brownswood, a UK-based label. 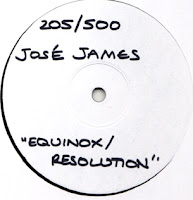 “Equinox” is one of Peterson’s favorite Coltrane songs, and before long, James was signed to Brownswood. In 2007, 500 10-inch, white-labeled, numbered copies of a test pressing including “Equinox” on one side and “Resolution” on the other were issued. Both were supposed to be included on James’s first CD.
The day before the CD was scheduled to go to the pressing plant, Peterson and James learned that the Coltrane estate would not grant permission for the new vocal versions. The release date was postponed while James wrote and recorded three new tunes.
James later told an interviewer for the London dance club The End, “Alice Coltrane had a lot more say when she was alive, I think it was just her making all the decisions in fact, then after she died things got way more complicated – I think there were six kids or something like that. I was really disappointed actually, and Gilles was heartbroken, man, because that was kind of the whole reason we both wanted to do the project.
"I was talking to Dwight Trible about the same thing about two weeks ago and he agreed, it seems they want people to remember him and have tributes and stuff, but they don’t really want the work changed, it’s like this whole yes-you-can-no-you-can’t thing…it’s a shame.”
Singer Trible recorded Coltrane’s “A Love Supreme” on an EP called “Acknowledgment for J.C.,” released in 2008 on Kindred Spirits.
Side note: Elling secured the rights for his version from Alice Coltrane when she was still alive. He explained at a concert at Gustavus Adolphus college in October 2009: “Mrs. Coltrane did not cotton to people writing lyrics to her husband’s music.” He sent her a tape and heard back: “The first word is ‘God’ and I like that and that’s right, so he can record this—but no more from anybody.”
You can’t buy a CD of James singing “Equinox” and “Resolution.” But you can hear both in their entirety, and Coltrane’s “Central Park West,” with James’ lyrics, on his website. Go here, scroll all the way down to the bottom of the page, and enjoy. (Just above: an entire concert of James and pianist Jef Neve playing the music of Coltrane.)
Image of 10" pressing #205 from the Breath of Life website, where Mtume ya Salaam and Kalamu ya Salaam love James and his "Equinox."
Photo of José James by John Whiting.
Posted by Pamela Espeland at 3:31 PM