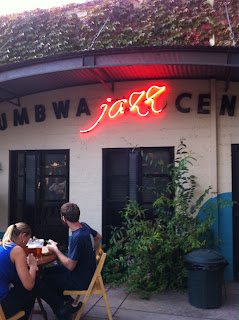 They've been together 14 years, and it shows. This exquisitely expressive quintet speaks with one voice and five voices, depending on the moment and the phrase. Fronted by Myron Walden on bass clarinet and alto saxophone, Melvin Butler on soprano and tenor saxes, framed by Jon Cowherd on piano and organ, Chris Thomas on bass, with drummer Brian Blade at the back, the Fellowship Band played two profoundly moving, frequently thrilling sets at the Kuumbwa Jazz Center in Santa Cruz on Monday, Sept. 12. Starting shortly after 7 p.m., the music ended around 10:15.

It's hard to be descriptive about the Fellowship Band's music. Where is the vocabulary to convey pure emotion? From the first moments—Cowherd's delicate piano chords, accompanied by Thomas's elegant bass—I was lifted up and carried like a baby. When the rest of the band entered on the first tune and Butler stepped hard on his soprano, I thought for a moment we were in for a wild time, but Walden's bass clarinet announced a beautiful melody, cushioned by piano and arco bass, and beauty remained the mood for much of the evening. It was all about beauty, and a torrent of pure emotion.

When Butler and Walden switched to tenor and alto saxes, then traded eights, their music was a series of rhyming couplets, a conversation among close friends. When they played together, it was two rivers meeting and separating, flowing together and branching out and joining again. The last time I heard a pair of horn players who made me feel that way, I was listening to David Sanchez and Miguel Zenon.

There was no talking to the audience during the sets, but after each set, Blade announced what we had just heard. First set: "Landmark" and "The Mary Suite" (I think;  I was writing in the dark) "The Mercy Suite," both recorded but not yet released, and "Alpha and Omega" from Season of Changes (Verve, 2008), their most recent recording. "We hope to release our next CD soon," Blade told us. And: "We only played three songs this set, although it may have sounded like more."

The second set began with a slow simmer on the tenor and alto saxes, and a solo by Blade. Then Walden cut loose on his alto sax and everything changed.

Although this is technically a drummer-led band—Blade started it, and it's his name most people know—it's a genuine ensemble, a fellowship. Unless someone is soloing, you are aware of all five musicians equally, and there is no clear leader. Your attention shifts from one player to the next, then back again, following the sound around the stage. But Walden was the star of this set, with the other four giving him all the support and companionship he could possibly need as he leaned over the edge of a high place and jumped. He soared, he roared, he screamed, he shook us hard. At the end, as the audience yelled its approval, my face was wet with tears. When Walden lowered his horn and raised his face to the ceiling, eyes closed, it could have been over, but it wasn't. Butler entered with his tenor, soft and caressing, the calm after the storm, and led us safely home.

Second set: "Farewell Bluebird," which Blade explained is a song written about a cafe in New Orleans. Then "Season of Changes," the title track to their latest CD. "Shenandoah," which began with a lyrical, thoughtful organ solo by Cowherd. And "Migration," which began with a solo by Blade that made me think of a watercolor painting. The encore: a melody Blade wrote for his mother, "Friends Call her Dot." Sweet and tender.

I haven't said nearly enough about Cowherd or Thomas or Blade. I wish I could write more about them all, if only to communicate (or try) what it was like to hear this music. When the concert had ended and most of the audience had left, and the staff was going around the room picking up plates and bottles, Walden sat at the side of the stage, hands clasped, head bowed, looking exhausted. People approached him to greet him and thank him, and he roused himself each time, but in between, he folded. I have rarely heard music so full of feeling. I felt I'd been in the presence of five preachers, and I left convinced that they were speaking truth.  If jazz is as much about feeling as technique, if expression is as important as history and repertoire, I can't imagine better spokesmen than the musicians of the Fellowship Band.

This was my first visit to the Kuumbwa, which must be one of the best rooms on the planet for live jazz. It's a serious listening room, seating maybe 200, with food and beverages (including wine and beer) available, but no service during performances. People are there to hear jazz, not to see and be seen or talk with their friends (except during breaks). Kuumbwa is supported by grants and memberships, and it books jazz during the weeks, not on the weekends, catching major jazz acts as they travel down the coast from San Francisco to Los Angeles.

Tim Jackson is artistic director for the Kuumbwa, and also for the Monterey Jazz Festival; he knows everyone. The sound in the room is brilliant, and the door is left open to the outdoor patio, letting in the fragrant night air and sending music into the neighborhood.

If I lived in Santa Cruz or nearby, I would come back next week for Branford Marsalis, and again in October for Rudresh Mahanthappa, and then for Gary Burton, and after that for McCoy Tyner with Jose James and Chris Potter. An amazing lineup for a room that Santa Cruz and mid-coast California are very lucky to have.
Posted by Pamela Espeland at 7:00 PM