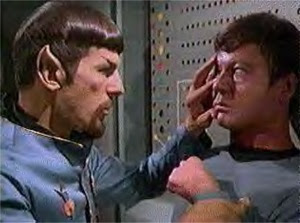 Pilc would not allow photographs, even by those of us with stealthy, silent cameras who never use flash, but that turned out not to be a problem. The Vulcan Mind Meld more than adequately describes the extraordinary mental communication that must exist between Hoenig and Pilc, given the way they play.

I missed Hoenig and Pilc last year when they came to the AQ and have heard raves about them ever since. Still, I wasn't prepared for the experience of seeing them live. Hoenig plays the drum set as if it's a keyboard; using his elbows to tune the drums, he exacts actual notes from them, heard most clearly in their version of Nat Adderley's "Work Song." Pilc is a piano monster. He plays faster and larger (dense runs, thundering chords), with more imagination and wit, than many I've heard in a long while, and I hear a lot of pianists.

They began with Pilc's arrangement of a Robert Schumann melody (lyrical, lush), then a Hoenig composition, "The Painter." After that came "Work Song" and Hoenig's astonishing performance, which framed fireworks and crashes from Pilc's piano. Glawischnig is a terrific bassist (I've seen him before with David Sanchez), but he seemed a bit conservative in the company of Pilc and Hoenig. I imagined our own Adam Linz on stage with those two. He'd fit right in.

Next up, a version of "Giant Steps" that began with quotes from "Mission: Impossible," "The Pink Panther," and Mozart—red herrings all. It was during this piece (the single most interesting arrangement of the Coltrane classic I've ever heard) that I'm certain I saw brain waves pass between Pilc and Hoenig. Every move they made—changing keys, meters, moods—was made precisely together. It was uncanny.

For the second set, we heard "Farewell," a composition by Hoenig, which Pilc began by plucking the strings of the piano. It could have been a Bad Plus piece written by Reid Anderson. We might have heard a quote from Monk, though with Pilc, a quote can be a gesture or a raised eyebrow. I was listening so intently I wished two of them would step back for while so I had the luxury of focusing on just one.

The second set brought two lengthy pieces by Pilc: "Golden Key" and "Cardinal Points." Pilc whistled through much of the first tune. By this time, he could have done anything—burst into song, danced the tango, stood on his head and juggled pies with his feet—and I would have been happy. What a playful, brilliant, surprising night it was.
Posted by Pamela Espeland at 2:23 PM