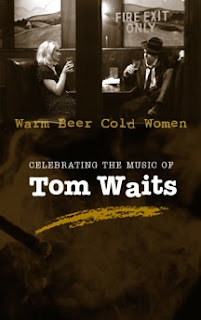 Friends are big fans of Tom Waits but I've never gotten into his music. I can't understand most of what he's saying/singing, and the tunes seem a bit too theatrical to me. (If it looks like a musical and walks like a musical, I usually run the other way.) But I realize Waits is a big singer/songwriter deal and I want to know more about him, so I keep trying.

In 2001 (so long ago?), we went to see John Hammond at the Cedar when he was on tour for "Wicked Grin," his CD of Tom Waits songs. Liked it! So when I heard about "Warm Beer Cold Women" (from an email sent by bass player Chris Bates) we decided to see that, too.

It would not have killed the Dowling to shine a little more light on the stage; band members Bates et al. labored in the shadows for most of the show. But the music was interesting and there was a lot of it: 31 Waits songs, performed more-or-less chronologically, from beat-poet jazz to torch songs, circus songs, street songs, love songs. I was surprised at how beautiful some of the songs were; it helps when you can understand the words.

I liked the singers—Hays, Curley, and Berdahl—very much. For some of the songs, they acted out mini-stories; for others, they stood there and sang; for one, Berdahl (who recently tore his Achilles tendon and had surgery to repair it) waved a crutch wound with Christmas lights. Chouinard played a greasy tango with a long-stemmed red rose between his teeth; when accordionist Mark Stillman first came on stage, he entered through a cloud of smoke and a rumble of thunder. It was the first time I'd seen an accordionist look menacing, and not, I hope, the last.