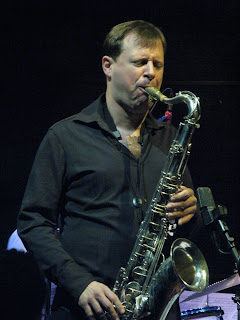 One night, two sets. We stay for both because local appearances by Underground are rare; the last time they played the Dakota was February 2006. The first set is open curtain and both sets are packed, the second with more twentysomethings than I’ve seen at the Dakota in a long time. I hear talk that a bus came in from Eau Claire, Wisconsin.

The two sets are completely different—no crossovers, no repeats. Although they’re supposedly on tour for their new CD, Follow the Red Line: Live at the Village Vanguard, that is not the focus of the evening, and I don’t think Potter mentions the CD even once in a buy-one-before-you-leave way. The focus is music, including tunes from the new CD, at least one from the original Underground (2006), a couple of covers, and several new tunes as yet unnamed. Potter describes the latter as “songs we’re introducing into the book” and explains that “naming these tunes is the last thing I get around to.” In 2006, they played something Potter called “Pop Tune #1” because it didn’t yet have an official title. On Follow the Red Line, it’s “Pop Tune #1.” 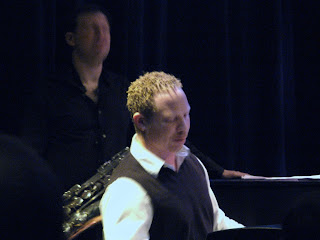 Underground is not your typical jazz quartet (if there is such a thing, on second thought). Its sound is big, room-filling. Sometimes it seems more like a rock band. A funk band. A band that has heads bobbing and feet tapping and white people getting wiggy in their seats. Tunes open with solos, add instruments and layers, and resolve into steady grooves that provide a solid foundation for all sorts of antics overhead.

Set 1 begins with “Facing East,” a new piece. Next up is “Pop Tune #1,” which starts as a lovely ballad in which Potter’s saxophone and Rogers’s guitar do a pas de deux. You can almost feel the tension between the notes, like elastic stretching. Then “Arjuna” from the new CD, during which Smith pats and rubs the drums with his hands while the trio lays down a strong, dark beat. Taborn plays the Fender Rhodes like the old-fashioned electric piano it is, with a high and beepy sound. For “Zea,” a love song from Follow the Red Line, Potter switches to bass clarinet and starts with a tender solo. Over the course of the evening, he plays bass clarinet for two, maybe three songs, but he always ends on the saxophone, which seems like where he most wants to be. 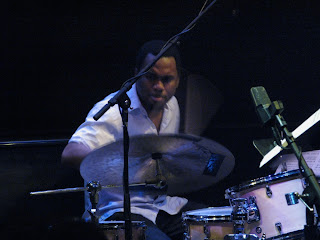 “The Wheel” from Underground is a wild ride. I’ve heard this song several times (they played it in 2006 and I’ve listened to it often on the CD) but it’s still impossible to predict where this group will take it, especially during their solos. You have to follow them into the woods and trust them to lead you back out again. This time, the rhythm repeats, Chris steps back, Adam and Craig keep the beat, and Nate takes off. The melody returns, the song ends, and so does the first set.

Set 2 opens with a new Adam Rogers composition called “Rumples.” (“We’re doing a set of music not recorded yet,” Potter explains. “A sneak peek.”) Rogers plays a low guitar solo, and Taborn’s Fender Rhodes growls along beside him. The groove on this tune is very deep. The Fender Rhodes sounds like a bass, then a horn. This is followed by another yet-unnamed new tune, fiery and daring. Potter plays a big, muscular solo, one of the single most amazing saxophone solos I’ve ever heard. Then “another new one,” more mellow than the last.

The second set is turning out to be higher energy, more out there. The crowd is different, too, maybe more demanding? Even the air seems electric. 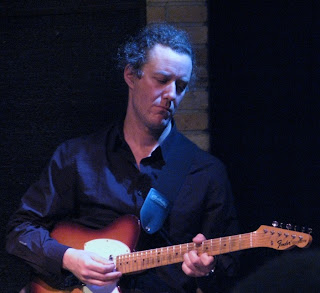 Potter’s playing is fierce but I don’t detect any anger in it. (Some horn players seem full of anger, but I hesitate to name names because I could be totally off about this.) There’s no strutting or machismo. The music is the message, and the joy of making the saxophone go everywhere and do everything, supported by that underlying groove. It’s fun to hear and very stimulating, a workout for your head and your ears.

A new cover: Dylan’s “It Ain’t Me Babe.” At first it comes across as pretty straight. I'm suspicious. Taborn and Rogers lay down chords, Smith keeps time, Potter goes crazy, but you can actually hear the melody. Rogers’s guitar has a sweet, strummy 1960s sound. The whole thing has a jingle-jangle feel and it's lovely.

Another as yet unrecorded Potter tune, "Boots" opens on bass clarinet. (They played this one in 2006, too.) Potter takes a very fast solo and dances with the guitar again. Rogers shows off on an arena-style rock-star solo. Then Smith makes the walls come tumbling down. How does he have any energy left?

We suspect it’s probably over—they have played two lengthy, no-holds-barred sets—but we keep clapping and they return for an encore, a cover of Joni Mitchell’s “Ladies of the Canyon.” Joni’s music is being rediscovered by everyone. Potter plays an exquisitely beautiful solo, and the band rises up around him. Perfection. And now the music is over for real.

Read more about Craig Taborn in my MinnPost preview.