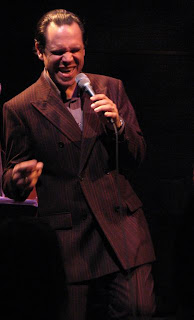 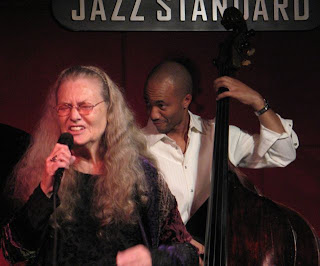 This concert is the real reason we’re in New York. That it falls on Valentine’s Day weekend is a happy accident. I’ve been a Kurt Elling fan since I first heard him sing at the old Dakota in Bandana Square, whenever that was. Over the years, I’ve seen him in Minneapolis, Chicago’s Orchestra Hall, the IAJE stage in New York, the Monterey Jazz Festival, and Birdland. Tonight’s show is in the elegant Allen Room, part of the Jazz at Lincoln Center complex.

We’re at the 9:30 p.m. set, so it’s dark outside and the city lights shine through the wall of glass behind the stage. (The wall measures 90' wide x 50' high and tilts out.) The traffic along Central Park South is a slow lava flow. We’re sitting in the second row to the left of the stage and can see people moving around their homes in the high-rise buildings across the way.

Nancy King shares the bill, but Kurt comes out alone with his band to open with “Beware My Foolish Heart.” I love this song, and I love how he sings it, but I don’t love the particular verse he adds.

Elling arcanum: He has used two different verses in this song. On the Live in Chicago CD (1999), he sings his version of “The Dark Night,” a poem by 16th-century Christian mystic St. John of the Cross. Elling’s lyrics: “One dark night/Fired with love’s urgent longings/Clothed in sheer grace/I went out unseen…to where she waited for me….” He turns a passionate poem about a soul seeking union with God into a passionate poem about a man seeking union with his lover. Not much of a stretch and it works.

Tonight he sings his version of “The Moon Was Once a Moth,” a poem by 8th century Sufi saint Rabia of Basra. From what I can tell, Elling expands on the original (about a moth who runs to God, they embrace, she dies, and “now just her luminous soul remains”). In Elling’s version, “they embraced and she passed into death/with ecstasy dissolving her body in a thousand signing smiles/her limbs fell softly to earth to sanctify the night meadows….” I can’t get past the self-immolating moth and the little legs drifting down. To me, it’s a big ewwww.

Musically, it’s gorgeous: just Elling and his collaborator Hobgood on piano, so beautiful, with Elling ending the moth tale (“and again/and again/and again”) on a high note that won’t let go, then it’s back to “Beware My Foolish Heart” and the bass and drums return. Afterward, Elling quips “Thank you, good night!”

Next up: “Change Partners,” with a solo by Amster. Then Betty Carter’s “Tight,” which Elling begins by finger-snapping the rhythm for drummer Hutchinson, who starts off on brushes. This is my first time seeing Hutchinson. Elling changes drummers. It seemed for a time that Willie Jones would be the fourth member of the quartet, but Elling’s Web site names Kobie Watkins as drummer, and we saw Hutchinson, so who knows? (BTW, tonight Jones is performing with Ernestine Anderson at the Iridium.)

On “Tight,” Elling scats, something I’ve been waiting for. He’s a bit more hammy tonight than other times I’ve seen him. Maybe it’s the occasion, maybe the venue, maybe the crowd.

Afterward, Nancy King enters on her new hip and a cane. Their first song, “What’s New,” is a perfect segue into the rest of the evening, a mutual admiration society of two powerful singers. Their scatting is playful stream-of-consciousness, blending in bits from other songs (“In this world of overrated pleasures and underrated treasures, I’m glad there is you….” “You are too beautiful and I’m a fool for beauty”).

Elling steps back, leaving King and Hobgood alone for a ballad, “La Valse des Lilas (Once Upon a Summertime),” with English lyrics by Johnny Mercer (“Once upon a summertime/if you recall/we stopped beside a little flower stall/A bunch of bright forget-me-nots was all I’d let you buy me”). Wistful and delicate.

King is an expressive, emotional singer, and we should all be ashamed of ourselves for not buying every one of her CDs (now hard to find) and traveling to her home town of Portland to hear her sing. King decided “to do singing for my life” at age 14, after hearing Ella Fitzgerald scat at a 1954 concert. She has turned down lucrative contracts that stipulate no scatting. When you hear King scat, it’s evident this is her natural language, as effortless as breath.

Next, Monk’s “Misterioso,” vocalese version, with Elling and King trading syllables, backed only by Amster on bass. Their voices are perfect together, and Amster’s accompaniment is flawless. After, Elling says, “And that’s why I’ve kept him in the band for 13 years.”

Elling follows with his own lyric to Dexter Gordon’s “Where Are You,” a song he introduces as a “torn Valentine” (“Where is your heart, my love?…. I need you baby, but darling where, baby, where are you?”) Hobgood plays an exquisite solo. While Elling’s name is the reason I buy tickets (and hop on planes), Hobgood is every bit as good, an intelligent and eloquent performer. I’ve read several writers who bemoan the fact that he isn’t better known on his own merits. When you see Elling and Hobgood together, it’s clear that this partnership is greater than the sum of its parts. Any time a group includes a singer, the singer takes the spotlight, something Hobgood seems to accept without feeling diminished.

The penultimate song of the evening: “Nature Boy.” This is mostly Elling’s tune; King contributes a few side notes. Because the show is nearing the end (a bit too soon for me and the $61.50 per ticket price), Hutchinson takes a lengthy solo. It’s over, everyone exits the stage, then returns for a “Stardust” encore.

It’s been an evening of standards, of Elling’s resonant mahogany and King’s rich cherry wood. Earlier, Elling told us that he’ll travel to Portland next week to perform with King there. Is a recording in their future? We can hope.

Photos: Jazz at Lincoln Center does not allow photos, not even snaps of the view out the window once the show is over and the artists are gone. Geez, lighten up, this isn't the Federal Reserve. Luckily Elling wore the same suit when he performed at the Dakota in March 2007, when this photo was taken. King sang at the Jazz Standard in January 2007. Here she is with bassist Reuben Rogers.

See a view of the Allen Room here. For the Elling/King concert, seats filled the room.
Posted by Pamela Espeland at 12:39 PM