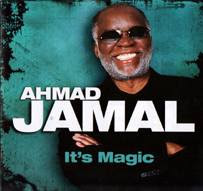 Earlier this week I had the privilege and opportunity to interview Ahmad Jamal, an artist I have long admired. I was more than a little starstruck when I picked up the phone and dialed his number (he’s in CT, I’m in MN). He was enormously gracious and behaved as though he had all the time in the world to speak with me.

The main interview appears on MinnPost. Here are a few more moments from our conversation.

Ahmad Jamal on camaraderie between musicians:
An endangered species…. Pittsburgh, New Orleans, Memphis, Kansas City, East St. Louis, Detroit: These are cities where camaraderie existed when we were growing up. We had wonderful memorable jam sessions then. There were rooms where you could stay and become artist-in-residence.

On mentoring young musicians:
Today you don’t have anybody, or very few people, launching young careers. Record companies don’t want to do it. Too much money. [I’m mentoring Venezuelan pianist] José Manuel García of the International Groove Conspiracy. [Korean pianist and composer] JooWan Kim. [Japanese-born pianist and composer] Hiromi, one of the most spectacular talents in the world. [French jazz singer] Mina Agossi. It’s quite a load. [Note: All share the same manager, Ellora Management in Lakeville, CT.]

On “American classical music” vs. “jazz”:
For clarity, I’m not paranoid about the word “jazz”…. If you want to change the lingo, the language, in any direction, it should be done by the practitioners. If you want to change the language of the music business, it should be a musician…. This business of wrong terminology irks me sometimes. It’s up to us musicians to define and sophisticate, to form a language that interprets and gives proper meaning [to what we do].

Randy is coming to his own finally, after going to Morocco, living in Africa, going overseas for years. He is finally been given some of the recognition that he deserves. We share the same agent…. I went to his nightclub in Morocco. That’s when I met Azzedin. The rest is history….

Not all of us have million sellers. Dave Brubeck, “Take Five.” [Jamal's] “Poinciana.” Herbie Hancock. Miles Davis. All of us have had big hits or a cumulative amount of records sold. Horace [Silver] has had a lot of exposure. Not like Elton John, the Beatles, a different genre altogether. When it comes to instrumental music, there are very few of us who have the recognition of Henry Mancini, Burt Bachrach, George Shearing, “Lullabye of Birdland,” Joe Zawinul’s “Birdland,” another big hit.... Randy didn’t have a million seller.... [I mention how much I like “High Fly.”] “High Fly”! That’s not Randy’s anymore. He gave it to me. Like Jimmy Heath gave “Melodrama” to me. That tune is the essence of Randy.

On what’s next for him:
Only the Creator knows what’s next. That’s as accurate as any human being can get. We plan, but God is the best of planners. Sometimes we overthink ourselves. We think ourselves into trouble. If we do the right things, life takes care of us. If we’re snoozing, we’re gonna lose….

I’m thinking now of going into the studio, taking my time, doing another record next year I’m looking forward to being my best. “Paris After Dark.” Maybe we can play that finally correctly. A section piece, “After JALC.” [Jazz at Lincoln Center.]

On his “proposed autobiography” (mentioned on his Web site):
No news! I don’t think that’s going to happen. Too personal. I don’t want to sell books. I want to live a life that’s not based on selling books.
Posted by Pamela Espeland at 10:00 AM