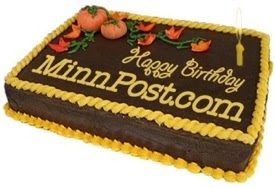 Several reviews need writing--Dennis Spears on Halloween, Rick Germanson, and shows from even earlier--but those will have to wait. For now I want to mention that it's MinnPost's first birthday. There's a party on Sunday, Nov. 9 from 4–7, at the St. Anthony Main Event Centre (219 SE Main St., Minneapolis), open to members only (new members can join at the door, or online). MinnPost, as many people don't yet know, is a nonprofit. There are annual membership categories but the truth is almost any amount will make you a member. For nonprofits, numbers of members count almost as much as the amounts they give.

What the one-year marker means to me (apologies for being self-indulgently self-referential here) is I have now written about jazz every week for a year. During the planning stages, someone (Joel Kramer?) at MinnPost decided that jazz was worth reporting on regularly. Fellow MinnPost writer Susan Perry recommended me for the job. I said yes without knowing what I was getting into; I had never written a weekly column before. I've had the benefit of an excellent editor (Casey Selix) and the privilege of interviewing many jazz artists I admire. (I spent 45 minutes on the phone just yesterday with Poncho Sanchez, and who wouldn't want to do that?) It's a learning curve, a lot of work, and a pleasure.

And that's all I'm going to say about that. Happy Birthday, MinnPost! Here's to many more.
Posted by Pamela Espeland at 9:28 AM