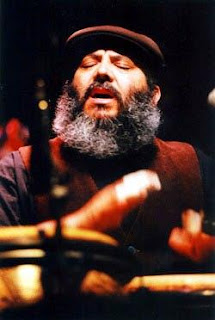 Master conguero and Latin jazz bandleader Poncho Sanchez brings his Latin Jazz Band to the Ordway next Wednesday, Nov. 12. I spoke with him earlier this week for MinnPost and he was one of the most enjoyable interviews ever, full of stories and enthusiasm. I had listened to an earlier interview with him on KFAI Radio and learned that all I had to do was stay out of the way and let him talk.

His latest CD, Raise Your Hand (2007), features guest artists Booker T. Jones and Steve Cropper (among others). Sanchez told me how they first met:

“We were in Italy, on a tour in Europe of major jazz festivals. We got on a bus and the driver told me, ‘I have to stop at another hotel and pick up four musicians playing the same festival you’re playing, okay?’ I said sure, we have a big bus. I had no idea who they were.

“We pull up at a hotel and here’s four guys. I say, ‘Wait a minute! That’s Booker T and the MGs!’ They didn’t know who we were, they just knew some bus was coming. They didn’t know too much about me, or Latin jazz—that was about 22 years ago. It was a four-hour bus trip. We talked to them and got to know them.

"Many years later, a year and a half ago, I was talking to the VP of Concord, John Burk. He said, ‘Concord owns Stax now, is there stuff in the old library you want to look through?’ I said, ‘I got all that stuff.’ ‘Want to do a record with Booker T and those guys?’ ‘Sure, I met them in Italy on a bus.’ When they came to the [recording] session, we were like brothers.”

Although the story of how Cal Tjader discovered Sanchez is Latin jazz legend by now, it’s still a treat to hear Sanchez tell it:

“My older brothers and sisters had all of his records. I used to look at the album covers, at this white guy who played Latin music. He sure played good. My brothers and sisters would see him play in L.A. from time to time. I thought, when I grow up, I want to see him. As soon as I grew up, I went to the old Lighthouse in Hermosa Beach, California, a famous jazz club for many years. I would see Cal play there. Howard Rumsey used to own that club. He was a jazz bass player. He ended up leaving that club and opening another in Redondo Beach called Concerts by the Sea. A nice club downstairs, underneath the pier. We started going there to see concerts—Mongo [Santamaria], Willie Bobo.

“What happened is, I was playing with a local band here in L.A., married, out of high school, my [first] son was two years old. I was playing with a local band at a predominantly Latin club, mostly Latinos. We played top 40s stuff, Tower of Power, Chicago. One night a white guy walked in with a hat and cigar. He stood out like sore thumb. Just a little odd. The guy sat at the bar. When I took my break, I went up to the bar and the white guy said, ‘You sound really good. Want a drink?’ ‘You buy it, I’ll take it.’ He told me he’s a personal friend of Cal Tjader’s. I thought, yeah, right. We made small talk. I said, ‘Don’t forget to tell Cal Tjader about me.’ I told the band and everybody’s making fun.

“One week later, I went to Concerts to see Cal Tjader. I’m walking down the stairs and that guy is standing next to Cal at the front door. I put on the brakes and told my wife, ‘Remember? There he is!’ He looked up at me and told Cal, ‘There he is. There’s the guy.’ Now I was nervous. I thought, this guy isn’t lying. I went down and he said, ‘Poncho, this is Cal. Cal, this is Poncho.’ Then I was shaking. I met Cal Tjader! I had seen him play many times but hadn’t talked to him.

“He asked if I would sit in. When? ‘Tonight! I’ll call you up.’ I’m not a professional musician yet, I’m just 24 years old. In the middle of the set, he called me up, I sat in, played a number, the crowd exploded. He liked me. After the set, he wanted my name, address, and phone number. ‘Maybe I can use you when I come down to L.A.’ "

Two weeks later, Tjader called Sanchez to play a gig at the Coconut Grove on New Year’s Eve. He became a member of Tjader’s band on the first night and stayed with him for 7 1/2 years until Tjader’s untimely death in 1982. He still calls Tjader “my musical father.”

Sanchez named his first son Mongo, for Mongo Santamaria. He named his second son Tito, for Tito Puente. I asked, “No Cal?” He said, “I should have had one more boy.”

Posted by Pamela Espeland at 8:06 AM