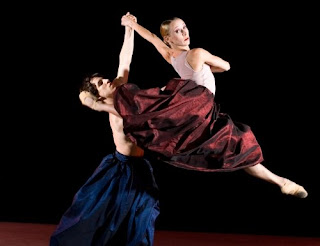 I don’t know much about ballet but do recall a Swan Lake when I dozed off as the corps de ballet was making its way onto the stage (one ballerina at a time, one step at a time, step...step...step...step...zzzzzzz). We had tickets to this performance because Orff’s Carmina Burana, like Mussorgsky-Ravel’s Pictures at an Exhibition, is a big old crowd-pleaser. (Also because, for the first time, Northrop made it easy to order tickets to events in their dance series at the same time I ordered the jazz series.) But mostly because I thought HH would like it.

The Balanchine, originally written as a ballet exercise, was gorgeous. Ten women, one man, all dressed in simple practice clothes, interweaving and posing, leaping and twirling on tippy-toes. What is more lovely than a line of ballerinas dressed in white and fluttering en pointe? The Toronto Sun said “It was a little like watching a snowfall through a kaleidoscope.”

The six-minute led was choreographed for RWB Principal Dancer Tara Birtwhistle and soloist Dmitri Dovgoselets. The music—piano and the sound of human breath—was fascinating, the dancing exquisite. 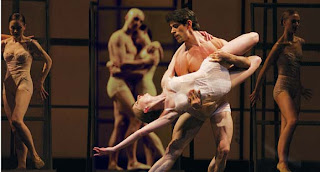 So I was already happy by the time the curtain opened on Carmina Burana and “O Fortuna” blasted up to the Northrop’s dusty rafters. For part of the time, everyone in the company, including the men, wore long jewel-toned taffeta skirts. At first they looked silly. Then the dancers spun and the skirts lifted and bloomed into sculptures, like inverted bowls with deep vertical edges. Fabulous.

There was a rather silly part—dancers brought out music stands bearing what looked like small patches of grass instead of music (representing spring, I suppose)—but other than that, it was an hour of ravishing beauty. Some of it was danced in corsets (the women) and tighty whities (men), distracting at first, then not. The hour seemed over almost as soon as it began. I wanted them to come back and dance it all again.