Frankhouse at the Black Dog 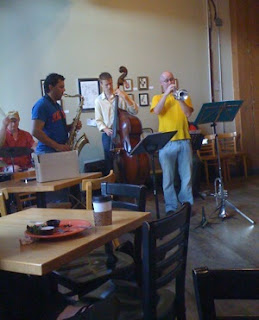 Still to come: a review of Frankhouse's CD release at the Artists' Quarter in June. Tonight was their first performance since then, with more scheduled for the coming months: at the 318 in August, the Dakota in September. I like this group a lot, and their approach to music: serious with a sense of fun.

Their choice of covers and how they play them is revealing. Joni Mitchell's "All I Want," Stevie Wonder's "Higher Ground," Michael Jackson's "Human Nature"--all songs we know, interpreted from a jazz/improv perspective (but not necessarily swing jazz, Frankowski explains). Then, out of the blue, Jackson's "Billie Jean" and Gnarls Barkley's "Crazy." Well, why not? (They also cover Kevin Washington's "Three Days," a beautiful ballad with a plaintive melody that's crying out for lyrics. What a torch song that would be.)

Where they really shine is on Frankowski's original compositions: bright, upbeat tunes like "Ambulatory;" "Enough," with its soaring theme (and intertwining horns); the sly, witty "Folly;" the menacing "Don't." He writes melodies that stay with you, that bear repeated hearings, that sound even better live, then you return home and put on their CD, Thought versus Emotion, and enjoy them all over again. Ed Jones at KBEM has said more than once that he thinks it's one of the best CDs of the year. Find it at CD Baby.

Starting out, the crowd at the Black Dog was small. Which may have something to do with the fact that Cirque de Soleil has literally pitched its tents for its latest touring show, Kooza, in the Dog's backyard and parking, always a challenge in Lowertown, is now impossible. Kooza runs through August 9.