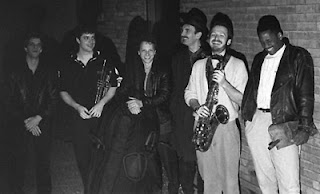 The band with the unforgettable name formed in the late 1980s, played a steady gig at O'Gara's in St. Paul for years, underwent personnel changes (one of the co-founders moved to New York), released their first and only recording, Chapter One, in 1993, was named Best Jazz Instrumental Group in the 1993 Minnesota Music Awards, and gave its final performance of the 20th century in 1997.

Twelve years later, they're back at the AQ for two nights.

In the 1990s, Jim Meyer famously dubbed them "the Cadillac of local jazz," and now I know why: Their music is a smooth ride, and not in a bad way. Their book is all originals and all the tunes are new to me; I missed them in the 90s and I'm here tonight because they're part of local jazz history and Lomheim is one of my favorite pianists.

As they play their first lengthy set (they start shortly after 9 and end at 11), people keep coming in until the house is SRO. We hear a tune by Dave Roos, then one by Tom Pieper called "Tribute" dedicated to Tom Harrell, the title track to their CD, a tango by Roos called "Entangoments," Lomheim's "Izzy & Lambchop," Pieper's "Pardon Who?," dedicated to George Bush Sr., and Kenny's "Little Big Horn."

Each tune is intro'd and outro'd by Kenny, who must have attended the same school of patter as Dave King: he's chatty, funny, and off the wall. We learn, for example, that "the Minnesota Music Awards went straight to our heads and we didn't play again for twelve years," that "Entangoments" is "twenty years old; it's in college now," that Lomheim's tune is "about sock puppets," and that "it's kind of creepy to thank people for showing up at a compelling jazz performance, but this is our national art form and I'm a patriot."

Did they get together and practice before this weekend's reunion, or did they just fall into step all over again? They play like old friends who are playing for old friends, which many audience members probably are. I've never heard any of this music before but I'm happy hearing it now. Listen to the mp3 at Kelly Bucheger's website. (Saxophonist Bucheger is the member who moved to NY; he's not here tonight, but he keeps the best and only web page about the group.) According to the facebook page, "the group has recently reunited." Does that mean there will be a Chapter Two?