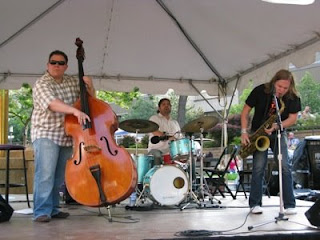 It is not decadent or greedy to see two or more live jazz performances on the same night. Jazz fans did it all the time on NYC's 52nd street back in the day, and musicians ran from gig to gig to play, sit in, or listen. Some nights it's possible to do it in downtown Minneapolis or St. Paul, and you can also go from city to city if you start early enough or stay out late enough.

Last night began at Orchestra Hall's outdoor Peavey Plaza with a free concert by Fat Kid Wednesdays: Michael Lewis on saxophones (tenor and alto), Adam Linz on bass, JT Bates on drums. The crowd was sizable, the beer cold, the music as intriguing and unpredictable as always with this trio. Looking worldly from his recent tour with Andrew Bird, during which he's been playing electric bass and singing, Lewis wore a new tattoo. FKW is (are?) at Cafe Maude tonight, at the Clown Lounge in the basement of the Turf Club on Monday. 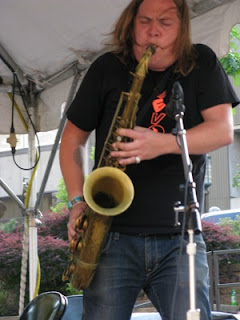 At 7:30 we were inside Orchestra Hall for a concert by the Minnesota Orchestra and the Irvin Mayfield Quintet. With the charismatic Andrew Litton conducting (which tonight included jumping up and down, suit jacket flapping), we heard Gershwin's An American in Paris (which HH said sounds like music from The Simpsons--it does). We rarely hear the orchestra (so much jazz, so little time) and I had forgotten how delicious one can be--all those musicians and dynamics, that big instrumental voice. It was fun to see both Pete Whitman (who played last weekend at the AQ and returns there soon with his X-tet) and Dave Milne in the saxophone section.

Then the symphonic arrangement of Duke Ellington's Black, Brown and Beige, which Ellington called a "tonal parallel to the history of the American Negro." Dismissed by critics in 1943, now beloved, it includes the gorgeous and wistful "Come Sunday." The original is over 40 min. long; this shorter (18 min.) version is the one most often performed.

With the orchestra still on stage, Maestro Litton sat down at the piano to play Oscar Peterson's arrangement of "'Round Midnight." Litton told us how much he loves Peterson, that he probably owns 140 Peterson CDs, and that when asked "What's on your iPod?" he'll likely answer "All jazz and the occasional Ring Cycle." He was a classical musican playing a jazz arrangement, with great affection and skill. Afterward he joked, "It's so much easier when nobody's listening." (He played with a dislocated finger, injured in the Bahamas during a fall from a scooter and scheduled to be splinted for months.)

For the final piece before the intermission, trumpeter Irvin Mayfield, bass player Neal Caine, and drummer Adonis Rose joined the orchestra in an arrangement of "Over the Rainbow" that Litton commissioned during his tenure with the Dallas Symphony Orchestra. (In Dallas, the trumpet part was played by Texas-born Roy Hargrove.)

After intermission, the focus of the concert: the world premiere of Mayfield's The Art of Passion, commissioned by the Minnesota Orchestra. Mayfield introduced it by talking about passion, how important it is, and how when passion is absent, resentment takes its place. He praised the orchestra as "the best distillment of love we do as humans." His quintet—which also included John Chin on piano and Ronald Westray on trombone—stood at front center stage with Maestro Litton behind them on his podium and the orchestra wrapped around them, like an embrace.

Through his music, Mayfield dealt with topics he cares about deeply: love, passion, truth, adventure. Sometimes the orchestra and the quintet played together, sometimes just the quintet, with lots of room for solos by individual members. The first part began and ended with a bass solo; the final part ended in a blaze of trumpet glory. The music was by turns thoughtful, beautiful, and lively. This was the first time it had been performed in public and the audience loved it. 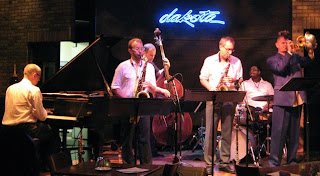 We went from OH to the Dakota to see the final hour of the Jazz is NOW! NOWnet, the composer's forum led by Jeremy Walker. Bonus: it was Jeremy and Marsha's fourth anniversary--a good feeling in the room, with friends all around. I've seen the NOWnet several times and like this group very much. It's more-or-less the same six musicians, with the occasional variation due to someone being out of town or otherwise engaged. This time was Walker at the piano, Chris Thomson on tenor sax, Scott Fultz on alto sax, Kelly Rossum on trumpet, Jeff Brueske on bass, Kevin Washington on drums.

They sounded great, their music new and modern yet very approachable--it approaches you. I spent a few moments talking with Larry Englund (KFAI host and the man who books the Hat Trick Lounge), who said, "What I like about their music is there's so much space in it." He's right. Walker doesn't play a single extraneous or disposable note. No one in the NOWnet does. Another reason to like them, and to pay attention to what they have to say. Some of what we heard: "Summer Sunday Afternoon," "So Long New York," Walker's arrangement of Ellington's "New York City Blues," something brand-new, and the lovely, romantic "Dorothy and Robert," Fultz's homage to his grandparents. 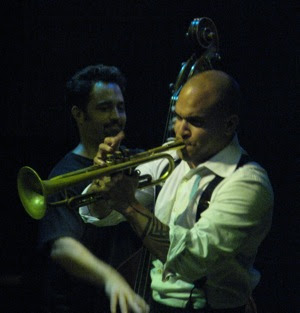 As the NOWnet wrapped up, people began arriving from OH: Mayfield and his quintet, Maestro Litton and his wife, Lilly Schwartz (the reason Mayfield is artistic director of jazz at Orchestra Hall, a position that was recently renewed), audience members who had heard that Mayfield might perform at the Dakota, as has become his tradition when he plays OH. After the NOWnet left the stage, once the quintet had dined and relaxed, they gave us what we wanted: an impromptu late-night jam. Mayfield played and sang and laughed and joked. We heard more of the marvelous Chin. Rose, still wearing his OH stage clothes, kept his jacket buttoned. Caine and Westray let loose. It was glorious.

And it was all one night and into the morning. 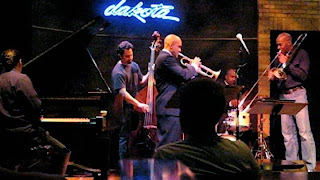 Posted by Pamela Espeland at 5:00 PM