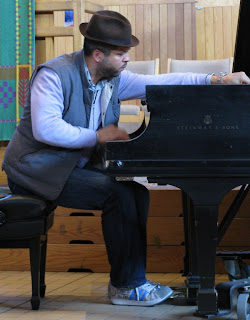 Pianist/composer Jason Moran spoke and performed at Augsburg College in Minneapolis yesterday (Oct. 12) as part of its 2009–2010 Convocation Series. Augsburg English professor Mzenga Wanyama, who curates the Fine Arts convocation, brought him in; Wanyama didn’t know Moran or his music before this but someone recommended him.

A moment to say how much I enjoyed meeting and speaking (if briefly) with Professor Wanyama, born in Kenya, educated at the University of Nairobi, then at Howard University and the University of Minnesota (where he earned his Ph.D.), now teaching English (postcolonial theory and literature; African American literary history) at a small Lutheran college in Minnesota. How did that happen?

I like Moran very much and have heard him speak before, at the Walker Art Center in conversation with performing arts curator Philip Bither. He’s an educator so he’s comfortable addressing audiences, and he has interesting things to say about his music, his influences, and his process(es). A report on the convocation is up on MinnPost. Here’s more of what Moran said during his hour in sunny Hoversten Chapel.

“Music is the form that has given me opportunity and possibility.”

After noting that hearing Thelonious Monk’s music changed his life (and kept him from quitting piano studies): “Monk is a descendant of people whose history is still uncharted and unfound…. As I play his music now, I see it as a reflection of his history.” (This is a helpful clue on how to listen to Moran play Monk; he’s not just dealing with the music, but thoughtfully and profoundly with his own considerable research into Monk’s life and background and ancestors.) 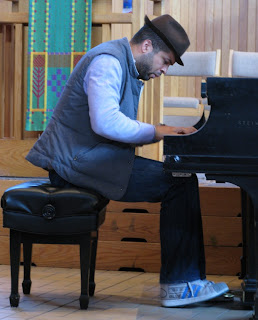 “It’s the duty of musicians to be as honest and truthful as possible—as honest as they can stand.”

He asked how many students in the audience have passports and was surprised by the large show of hands. Then he encouraged everyone else to get one and use it. His first serious travel experience happened when he was still in college (at the Manhattan School of Music, where he now teaches). Saxophonist Greg Osby needed a pianist for a three-week tour of Europe and asked Moran to come along. “I started to see what’s happening outside America. It was eye-opening.”

He talked about his teacher, Jaki Byard, whose unsolved murder in 1999 still haunts him. “Jaki was kind of a crazy piano player, with hair that shot out the back of his head like Frederick Douglass. Crazy dresser. He taught me to explore the possibilities of the piano. I always play a piece of his in performance.”

“To me, the piano is therapy… I have to travel through myself to get to the point where I can look forward.” 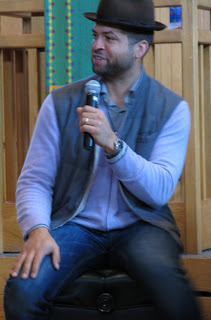 “Monk, Jaki Byard, and my parents all made it possible for me to do something artistic, satisfying, and also soul-searching.”

Words to young pianists (in response to a student’s question): “First, practice. Practice what your teacher says, and practice what you like. Second, listen to as much music as you can, including music you don’t like, so you know what it is.”

When a student asked him to explain what he was doing inside the piano, Moran talked briefly about John Cage and prepared piano, then demonstrated by putting a drumstick and mic on the strings and playing several notes and runs. “The instrument can be a toy. The sounds that come from it are up to you. The piano can be whatever you want it to be…. Once I poured potpourri inside my parents’ piano. It didn’t do much, but it still smells like flowers.”
Posted by Pamela Espeland at 9:39 AM