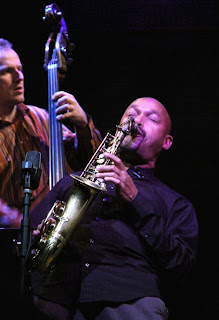 Alto saxophonist Miguel Zenón played the Dakota two days ago, two extraordinary sets, and I’m still thinking about them. (The house wasn’t full and some of us stayed for both. That’s a long night at the Dakota—the first set starts around 7, the second usually ends after 11.) The music was so intriguing, the rhythms so beguiling that I find myself returning to the evening—and to the CD, Esta Plena (Marsalis Music), for which Zenón and his group are currently touring. Its official release date is October 20; Zenón brought a box of 30 to sell at the Dakota. (Until Oct. 20 or shortly before, you can listen to the full album at NPR.)

For Esta Plena (This Is Plena), Zenón went home to his native Puerto Rico, from whose indigenous music he also drew for Jibaro (2005), the album believed to have gotten the MacArthur Foundation’s attention. (Zenón was named a MacArthur Fellow in 2008, shortly after winning a Guggenheim.) Jibaro is string-based music from the Puerto Rican countryside. Plena is vocal music associated with the coastal regions. Both are folk styles.

Except for maybe the encore after the last set, none of the tunes we heard was straight plena. All were plena wrapped in and shot through with modern jazz, which Zenón first heard as a teenager growing up in Puerto Rico, then studied at the Berklee and Manhattan schools of music. In 2004, just three years after earning his Masters in Saxophone Performance, he was invited to become a founding member of the SF Jazz Collective, one of the most prestigious jazz organizations in the USA. Current members include Stefon Harris, Joe Lovano, Robin Eubanks, Matt Penman, Dave Douglas, Renee Rosnes, and Eric Harland. Good company.

So Esta Plena is not folkie folk music—and yet, as another admirer seated beside us remarked, “Miguel, your roots are showing.” Somehow the music seemed rooted, grounded, traditional, yet brought forward into this moment, especially when heard live. 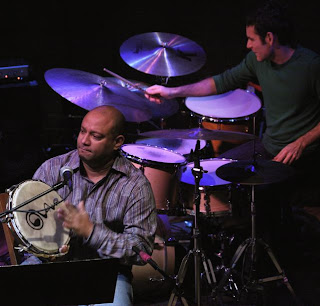 Zenón brought his working quartet, the fine musicians he has worked with for years: Venezuelan pianist Luis Perdomo, also a member of the Ravi Coltrane Quartet (can Perdomo pick saxophonists or what?), Austrian bassist Hans Glawischnig, formerly a member of Kenny Werner’s trio and quintet, now heading his own quartet (with Perdomo, Dave Binney, and Eric Doob), and Puerto Rican drummer Henry Cole (say koh-lay, not cole). For the new CD and the tour, he added vocalist and percussionist Hector “Tito” Matos, also from Puerto Rico. When he wasn’t singing (and usually when he was), Matos played one or more panderos (hand-held Puerto Rican drums). Zenón also sang.

For the first set, we heard individual tunes, most of which Zenón introed or outroed: “Esta Plena,” “Oyola,” “Pandero y Pagoda,” maybe “Residencial Llorens Tarres” (something that began with a lot of percussion, then moved into a speedy section with Zenón and Perdomo in unison). The second set become one continuous piece of many rhythms linked together, during which Zenón played with such fire and fierceness that I thought his head would explode, or maybe everyone’s. He had been more than warmed up for the first set; for the second, he was nuclear.

I found the music challenging, but in a good way; these are thick, thorny rhythms I can't separate into tidy sections. Every so often I clung to the bass line, hoping that Glawischnig would just keep time for a minute or two, but he was as crazy as the others. Whenever I thought I had figured out a rhythm, I was one or two beats off. I later read at NPR that “variations of three, six, and nine are recurrent motifs in the form, phrasing, and intervals of Zenón ’s compositions.” No wonder I was a helpless cork bobbing in the water. 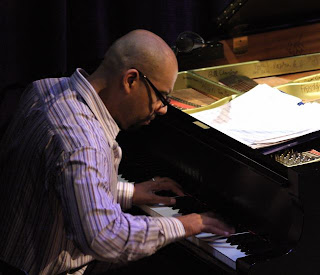 The music was also melodic and beautiful. Sometimes it was amusing. For the encore, “El Canto del Gallo,” which Zenón described as a traditional plena song, Matos clucked like a chicken and crowed like a rooster. (“El Canto del Gallo” = “The Song of the Rooster.”) In “Despidida,” Zenón quoted “Auld Lang Syne.” Before then, we heard sweetness and warmth from Perdomo’s piano, tenderness and depth from Glawischnig’s bass, and delicacy in Cole’s drums.

At the shining center of it all: Zenón ’s saxophone. His tone is clear and clean-edged, never fuzzy or blurry; it’s as if each note is carved by a knife. No matter how many notes he plays—and often he plays a lot of notes, in torrential runs filled with unexpected intervals, and he’s not afraid to rear back and wail (so far back he seems to be blowing himself backward, or doing the limbo)—each one sounds pure and fully-formed. His technical proficiency is undeniable; so is his passion. He wants us to know the music of his homeland. First jibaro, now plena; what next, Miguel? 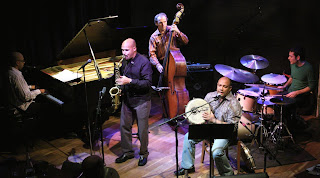 Photos by John Whiting
Posted by Pamela Espeland at 5:47 PM