On the road again: Kurt Elling and Laurence Hobgood in Fargo: Concert review 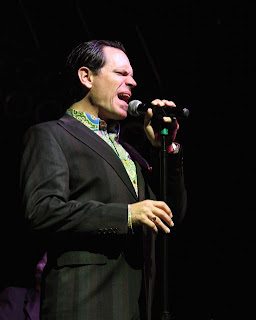 I have friends who follow U2 from city to city and believe me, jazz is cheaper.

This was a totally different concert from the one at Gustavus Adolphus College. From St. Peter to Fargo, there was not one crossover tune. Two possible reasons: This time, Kurt and Laurence performed with the Jazz Arts Big Band instead of their own quartet. And they don't repeat themselves.

How often have we all heard artists on tour for a new CD play the same sets multiple times? Dedicated to You is still new (although Elling and Hobgood are already well into planning their next recording with Concord), and while Elling mentioned DTY and the fact that it would be available for sale in the lobby after the show, they are not playing that show everywhere they go. (Though they are playing it on their European tour, which begins October 24 in Cork, Ireland.) Selected songs are being incorporated into the vast and expanding Elling-Hobgood repertoire. 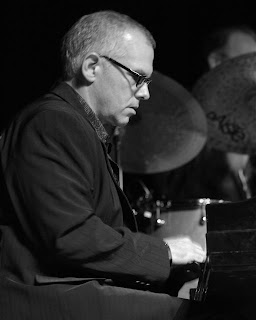 Playing with a big band can’t be as spontaneous as playing with a quartet. There are charts to be learned ahead of time. When Elling told the Gustavus crowd that the quartet would be performing some tunes from DTY, some requests, and “some things I haven’t thought of yet,” I took that to mean the set list was not carved in stone and they would go at least in part where the spirit of the performance and the house moved them. But with a big band, even the encore is decided and rehearsed in advance.

I wonder if the sets they played on stage in Fargo were the same as they played earlier that day, during their one and only rehearsal with the band. We were given a printed program with titles prefaced by “Program to be selected from the following.” Over two sets, they played most but not all of the songs listed, swapping “Man in the Air” for “Say It (Over and Over Again)” and changing the order significantly. I didn’t see any of the musicians madly shuffling charts on their stands, but perhaps Elling decided the order of the program as the evening went along? That would be interesting to know.

A bit about the Jazz Arts Big Band: Founded in 1991, the 17-member band is made up of professional musicians/jazz educators from the Fargo-Moorhead area. A nonprofit organization, it has a board and depends on grants, sponsors, and individual supporters—just like Minnesota's JazzMN Big Band which, I learned later from Jazz Arts Group executive director Rochelle Roesler, was modeled on the Jazz Arts band. (JAG is the umbrella group that brought Elling to town. This is its 19th season. Trombonist Wycliffe Gordon will perform in February. Past guest artists have included Conrad Herwig and Freddy Cole. JAG also has an educational mission; Elling gave a class on Friday for students that was also open to the public. Twin Cities-based vocalist Nancy Harms went to Fargo a day early so she could attend the class.) 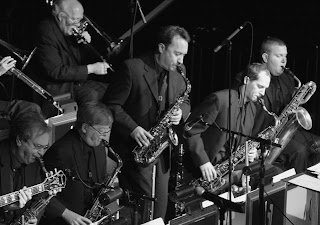 I’ve seen Elling with a big band only once before, at an International Association for Jazz Educators conference in NYC. (RIP, IAJE: Roesler saw Elling at the final conference in Toronto, and that’s when she decided she had to bring him to Fargo.) I saw him with the Bob Mintzer Big Band, a Grammy-winning organization led by jazz great (and Yellowjacket) Mintzer. The Jazz Arts band is not the Mintzer band, but it’s a good band and it was up for what Elling wanted it to do. Elling made his wants very clear, turning often to conduct the band and push it harder. I’m not sure how musical director Dr. Kyle Mack felt about that and I didn’t get a chance to ask him, but he was certainly gracious about it. (Writing for Fargo-Moorhead’s INFORUM website, John Lamb noted that Elling’s “takeover wasn’t hostile, but it was forceful.”)

The band opened the program with two upbeat tunes: “I Be Serious ’Bout Dem Blues,” a chart by bassist John Clayton, and “Another One of Those Things” a take-off on “Just One of Those Things” by composer John Mahoney. Mack introduced Elling by telling a story about an Arts Midwest master class he had attended several years ago, during which Elling had made a nervous young student feel at ease by asking him to stay after class for a private lesson. Then Elling and Hobgood came out, and those in the audience who were studying their programs and thinking they were about to hear the relatively mellow “Close Your Eyes” were in for a surprise.

Elling was in full bring-down-the-house Sinatra mode for “Luck Be a Lady,” turning to the band and punching the air whenever he wanted a blare from the horns. He got it. He wanted the band to swing hard right now, and he got that, too. The band might have started the evening a bit tentatively (okay, not might have, did), but by the end of the night they were breathing fire.

Everything seemed a bit overamped all evening long. Many of the subtleties usually present in an Elling show were lost. But this was about rousing a crowd that seemed even more reserved than Minnesotans, and more hesitant to show their enthusiasm. Solos (by the band and the guests) weren’t rewarded as often as they should have been.

Next: Mintzer’s arrangement of “My One and Only Love.” (Hear it on Mintzer’s Old School: New Lessons. It's also on DTY in a new arrangement by Hobgood.) Elling stepped aside to let the spotlight fall on the band's guitarist, Tom Carvell. Then, prefaced by Elling as “a little Basie action where the band gets all greasy”: “Goin’ to Chicago Blues,” with lyrics by Jon Hendricks. On this tune, Elling growled and roared. Jaws dropped. He could take this show to Vegas. 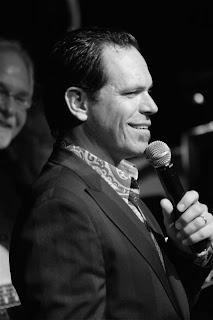 The first set ended big with Coltrane’s “Resolution,” featuring Elling’s lyrics and Mintzer’s chart. Elling and the band took it over the top. But first Elling told the story behind his version, which I had not heard before. “Mrs. Coltrane [Alice] did not cotton to people writing lyrics to her husband’s music,” he explained. He sent her a tape and heard back: “The first word is ‘God’ and I like that and that’s right, so he can record this—but no more from anybody.”

After the break, the second set began with two more tunes by the band: Lee Konitz’s “Subconscious-Lee,” arranged by David Springfield, and Horace Silver’s delightful “Filthy McNasty,” arranged by John La Barbera. This time, when Elling and Hobgood stepped on stage, they started with “Close Your Eyes” in a big band arrangement by Shelly Berg which Elling recorded earlier with the USC Thornton Jazz Orchestra. (You can find on iTunes if you’re so inclined. Search for USC Thornton Jazz Orchestra).

The band sat out for the next tune, the tender and beautiful “Say It (Over and Over Again)” from DTY (and also on Hobgood’s “Left to My Own Devices,” in a version for solo piano). Elling began by telling the crowd that Hobgood’s arrangement on DTY was for jazz quartet, saxophonist Ernie Watts, and string quartet (ETHEL), but “any night I have Laurence Hobgood with me, I have an instant ten-fingered orchestra.” This was the evening’s most romantic moment, a wonderful performance by a master of the love song and his elegant, intuitive, expressive collaborator. The crowd—about 400 people, not a full house but a good house, split among chairs on the main level and sofas/cocktail-style tables on the mezzanine—was rapt. 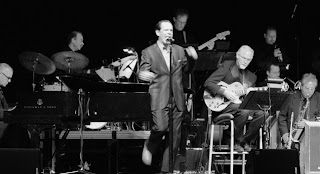 Before the closer, Elling took time to praise the band and introduce each member by name, “these handsome men, because everybody has a mother and they all want to hear their little boys’ names.” He reminded us that CDs were available in the lobby, each “a fitting coaster for anyone who likes a drink,” pointed us toward his website with the words “it’s costing me a fortune; it costs you nothing,” and said that his next CD—with John Patitucci on bass and Peter Erskine on drums (!!!)—will probably be out in the spring of 2010. Then the great, colorful story-song “Nature Boy.” If you want to see Kurt sing it with the Sydney Symphony Orchestra, here’s a video.

The encore, during which Elling conducted the band: “My Foolish Heart.” Two full, varied, enjoyable sets had come to an end.

But the night wasn’t over. Roesler kindly invited us to a reception at The Wine Bar, a small café in a strip mall where we had some lovely Penfold shiraz and I had the chance to talk with Dr. Matthew Patnode, a saxophonist with the big band (who told me how it works—thanks for that, Dr. P.), and with Hobgood, who was seated across the table from me.

Having read Hobgood’s postings on Elling’s website (the Forum section), I always thought he would be interesting to talk with, and he was. Topics ranged from the upcoming Jazz at Lincoln Center concert with Richard Galliano (Friday–Saturday, May 14–15, 2010), a meeting with Galliano in Paris (where the accordionist is a superstar), Turkish music, world music, the Dakota jazz club in Minneapolis, life in Chicago, life in New York, the Green Mill in Chicago, Hobgood's friend Patricia Barber (he calls her Patty), the piano he recently played at a concert in Des Moines, shopping for silk shirts in Los Angeles, the prospect of composing for string quartet, listening to Shostakovich’s string quartets (numbers 4 and 6, if I remember correctly), the next Elling CD and how amazing it will be with Patitucci and Erskine, Hobgood’s recent one-night engagement at Small’s (you can listen to both sets online), and more. 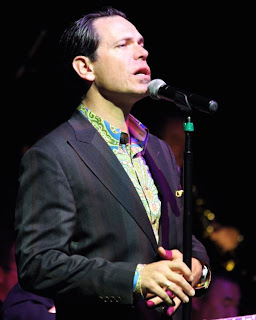 Meanwhile HH, seated at my right, was talking with Elling, who was seated at his right, about photography and music and Monterey and the Iron Chef television program (this being a bar, the TVs were on). I asked Elling if he cooked. He doesn't.

Photos by John Whiting.
Posted by Pamela Espeland at 12:01 PM