Kurt Elling Quartet at Gustavus Adolphus College: Worth the drive Kurt and his collaborator

Gustavus Adolphus College in Saint Peter, Minnesota is about an hour’s drive from Minneapolis, a bit longer if you stick to speed limits. It’s also Kurt Elling’s alma mater (class of 1989), and last night (Oct. 10) he returned for homecoming and a concert at Bjorling Recital Hall, where he first performed jazz before a live audience.

How many times have I heard Elling sing? I’ve lost count—maybe 20? And I’m not through yet. He’s always evolving, pushing himself, changing, going in new directions, taking risks, trying new things. I’ve never once seen him just go through the motions. He just gets better, more subtle and more powerful, commanding the stage and holding the audience. His voice is a Stradivarius, improving with the years. He must work very, very hard.

As I drive to Saint Peter with a friend, we wonder—will we hear the Dedicated to You show again? (Elling has been on tour with that in support of his latest CD on Concord, his take on the iconic Johnny Hartman-John Coltrane sessions—not a replication, an interpretation, with wonderful arrangements by Laurence Hobgood.) I’ve seen it in Monterey and in Minneapolis, and I think—if he wants to do it again, that’s fine.

He doesn’t. He cherry-picks songs from it (as he has done with his project with Fred Hersch, Leaves of Grass) but this is a whole new show as far as I can tell, full of favorites and songs not yet recorded but promised for his next Concord release.

Maybe because he’s back home at Gustavus (of which he always speaks fondly), maybe because Bjorling is such an intimate and inviting space (lined in wood, it seats just 475, and the acoustics are pin-drop perfect), maybe because he’s playing to at least a partly college crowd, Elling seems especially loose, relaxed, and anything-goes. He dances and glides across the stage, makes jokes, and addresses the audience throughout the performance. He’s warmer and more playful than I’ve ever seen him in a club setting, except perhaps at Birdland.

The night begins with a sweet, funny moment. Laurence, drummer Ulysses Owens, and Nigerian-British bass player Michael Olatuja come out through a door at stage left, take their places, and wait. Will they play an instrumental crowd-warmer? No, they just wait. The audience is absolutely still. Then Elling opens the door, which gives a loud crick crick. In pin-drop acoustics. Note to Gustavus: WD-40.

Song by song, here’s what happens next.

1. “Autumn Nocturne,” entirely a cappella. Elling’s voice sounds as if he has spent the last several hours warming up. This nostalgic, achy tune is a perfect start to a concert in a state that just last night had its first dusting of snow.

2. “My Foolish Heart,” with trio. The version that includes the poem by Sufi saint Rabia of Basra (“The moon was once a moth who ran to God…”). This seems to be Elling’s preferred version now; it’s the only one I’ve heard him sing live. There’s another, with a poem by St. John of the Cross, on Live in Chicago (1999). He ends on a high note that lasts and lasts and slowly fades and no one breathes until it’s over.

3. Joe Jackson’s “Steppin’ Out.” Seriously swinging. Forget the original pop song smoothie. It’s a jazz song now. I’ve read about Elling performing this song but have never heard it until now. Hoping it will be on the new CD.

Break: Elling talks about how much he loves the fall, the “magnificent everything season…. Summer is like finishing up the year for me.” Then tells us a bit about Dedicated to You, how the band recorded it live (at the Allen Room in Jazz at Lincoln Center) and had “one take to get it right…I’m pretty happy with much of it.” He promises to sing “some from that, some requests, and some things I haven’t thought of yet.”

4. “Dedicated to You,” a measured, velvety ballad on the original Coltrane/Hartman album, is a whole new song with Hobgood’s spirited arrangement—there’s bounce to it. Still beautiful but more modern. Hobgood is a genius. 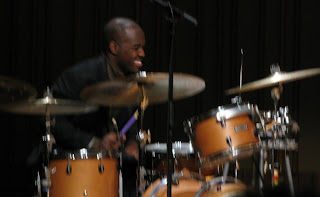 5. Working title: “Kabuki Cowboy.” Elling’s description: “A Marc Johnson lick with a lyric I’ve written.” A work in progress, and I’m glad I’m here to see/hear it. To me, this kind of experience is the whole reason to see jazz live. It's a surprise, a delight, a tour-de-force, a high-wire act.

It starts with teasing back-and-forth between Elling and drummer Owens. Elling scats a rhythm, Owens repeats and elaborates. Again. Fun to watch and hear. You can tell Owens doesn’t know exactly what Elling will do next—he’s a hitter on the mound, swinging at pitches. Then Olatuja joins in, and Hobgood, playing the piano like a kora (thanks for that insight, Janis), one hand holding down strings inside so the sound is more plucked than struck.

The lyrics are wild, plentiful, far-fetched, and colorful--almost stream-of-consciousness. Something about “a little man riding around in a space capsule deep inside my head,” about “digging everything in life” and “thinking all the time.” Hip, chatty, cool. I would have taken more notes but I was listening too hard. New CD, please. 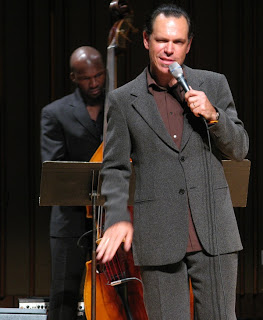 6. “You Are Too Beautiful” from Dedicated to You. A complete change of mood/direction that makes perfect sense. Elling introduces it by saying “By osmosis, you know this song, even if you don’t know this song.” A showcase for his amazing voice, its range and depth and resonance.

7. “Late Night Willie.” Hobgood plays a gospel groove and we’re off on another adventure—to me, the centerpiece of the entire night. Is this Elling’s take on the Keith Jarrett tune by the same name? I don’t know and can’t say but I’m guessing it is.

It starts with a story that seems customized for this crowd: about being in college, discovering yourself, finding out if you’re a late-night person or an early person. “Your perception will alter radically if you stay awake for 24 hours at a time…. You’ll find your sleep cycle has made you misperceive reality…. You’ll feel different about the day when you’ve already lived through one and you’re still up. You’ll wonder, ‘What will happen if I stay up for two days?’” There’s a very funny bit about being at a party, deciding to leave early, feeling someone pulling on the back of your coat (here Elling pulls on the back of his own suit jacket and poses as if surprised), and discovering it’s the devil disguised as your friend, who talks you into staying. 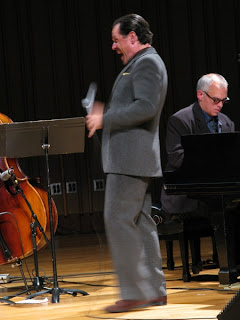 Throughout, the amazing Hobgood is right there with Elling. His piano accompaniment--intuitive, witty and wry--turns a monologue into a dialogue, a layered conversation. Fascinating to see and hear.

Then Elling launches into reams of lyrics, heaps of lyrics, singing fast. Playful, smart stuff, the total opposite in mood, style, and intensity of the Hartman/Coltrane project. A phrase I loved and managed to scribble: “Unless you’re Miles Davis, there’s always some brother, some other smoother than you.”

Elling steps aside and Hobgood takes it away and I will forever regret not making a clandestine recording of what happens next (which I would never do, but I’m just saying): a solo that strides across the musical landscape like Colossus, from gospel to blues to jazz to classical, thick chords and whispered single notes and glittering ornaments. The ending is delicious, so beautiful and romantic, and the drums and bass return and Elling steps forward and it’s a satiny segue into…

8. “Stairway to the Stars.” I’m still puzzling over how “Late Night Willie” turned into Rachmaninov. But I’m happy to hear this lovely song, which Elling sings on Hobgood’s latest CD, When the Heart Dances (2009). That is definitely worth checking out BTW; Hobgood’s playing throughout is gorgeous, and his bassist is not too shabby: Charlie Haden. I especially love the first tune, “Que Sera Sera.”

Break: Elling introduces the band: young Juilliard grad Owens, who’s “elbowing his way onto the New York music scene in all the right ways,” bassist Olatuja, “on loan from Terence Blanchard for the weekend.” He saves his most profound thanks for Hobgood: “my great collaborator and friend of more than 16 years…he makes so much of what we do possible…his arrangements and improvisational skills…he’s half of the success we have.”

9. Pure scat singing. Is it Monk’s “Well You Needn’t”? I think so, but only because (thanks to Carmen McRae’s Carmen Sings Monk) I can sense words behind the scatting. Maybe Elling’s version is built on it, or draws from it, or…who cares.

This is the official last tune of the evening, after which the band will return for an encore. But as I listen to Elling scat Monk (or whatever), I’m thinking as I always do when I hear him live that no one singing today can touch him. The awards (Best Male Vocalist multiple times), the heaps of praise (“standout male jazz vocalist of our time”—New York Times; “may be the greatest male jazz singer of all times”—Jazz Review), the awestruck reviews (yes, this is yet another one) are not fluff or hyperbole but simple fact. What a satisfying evening this has been in every way.

10. Hobgood’s “Motherland.” Just Elling and Hobgood on stage in a comment on the times, a plea for unity and change: “Look around/tell me what you see/it isn’t what it’s supposed to be.” Moving and inspiring.

Afterward, Elling greets friends and former classmates in the lobby, and Hobgood signs copies of his new CD. Mine, unfortunately, is in the car.

Worth the drive to Saint Peter—to, in daylight, past leaves of red and gold; from, in darkness, a long, lonely stretch of highway on the Minnesota plains? No question.

Worth the drive to Fargo, North Dakota, next weekend (Oct. 17) to see Elling and Hobgood with the Jazz Arts Big Band? Some people think so. Here’s a link. Tickets still available. Twenty bucks. 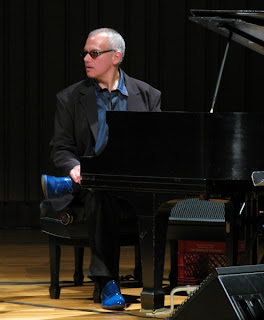 Laurence's blue shoes. The back of his jacket
was embroidered in red.

Posted by Pamela Espeland at 11:57 AM