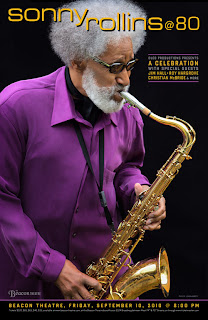 I first saw Sonny Rollins many years ago in Chicago.  I recall the concert vividly.  After Sonny played his first song, uncharacteristically a ballad, the 70-ish year old man seated directly to my left tapped on my shoulder and with a huge grin on his face said, “Isn’t he something?”  That night forever changed how I listen to and conceive music.

On the occasion of Sonny’s 80th birthday, I traveled to my old stomping grounds in New York for the Rollins birthday bash at the Beacon Theatre on Friday, Sept. 10.  Refurbished since I had been there, the Beacon, once a lavish movie theatre and replete with Greek and Egyptian architecture, had last hosted a Sonny Rollins concert in 1995.  Having purchased a ticket in May and knowing the announced guest list of musicians who’d join Sonny on stage—two of whom were “mystery” guests—my expectations were high.

Rollins last played an indoor New York City concert in 2007 at Carnegie Hall, an event marred by a will-call debacle caused by a computer crash that denied entrance to many ticket holders for the most anticipated portion of the concert, a trio set commemorating Sonny’s 1957 Carnegie Hall appearance.  I knew Sonny, having not played a concert in nearly six weeks, would be well rested, and especially anxious to make up for the 2007 gig.

Rollins, accompanied by his current working band (Russell Malone, Bob Cranshaw, Kobie Watkins, Sammy Figueroa), was given a standing ovation before even playing a single note.  Sonny began the festivities with two originals.  If perhaps slow out of the blocks, Sonny found his stride when taking a second solo during the opening “Patañjali.”  He seemed to have infinite permutations for the three-note melody, sometimes coaxing a snake-charmer tone out of his horn.  Whereas “Patañjali” was punctuated by a fierce rhythm, the calypso “Global Warming” was delivered with a buoyant bounce fitting for the celebratory nature of the evening.  Early on, it was clear Sonny had brought his ‘A’ game.

The first special guest of the night was Dakota favorite Roy Hargrove.  Introduced by Rollins as a “chosen one,” Roy recorded with Sonny in 1991 when he was 21 years old—and to my knowledge had not played with him since.  Hargrove, opting for flugelhorn, took the lead on a lovely reading of the Vernon Duke standard “I Can’t Get Started” and was complemented by the jazz contrast of Rollins.

The highlight of the Rollins-Hargrove pairing, though, was Billy Strayhorn’s “Rain Check.”  After Roy and Sonny had traded fours with Watkins, Hargrove attempted to return to the head before Sonny, shuffling briskly across the stage, challenged only by his octogenarian gait, stood up close to Roy and loudly put the brakes on any such closure.  Sonny, showing a sly grin, wasn’t out for blood, but he simply wanted to play.  Rollins and Hargrove started sparring, though friendly and often finishing each other’s thoughts.  One wonders if Sonny had flashbacks to his tragically-brief partnership with Clifford Brown.

After Hargrove left the stage, Rollins brought out master guitarist and former band mate Jim Hall.  Having noticed that Hall’s guitar was out of tune as he played an introduction to “In a Sentimental Mood,” (which would turn into a Hall feature—the only song of the night without a Rollins solo), Sonny, in a display typical of his sense of humor, elicited more than just a chuckle with his drawn-out quote of Chopin’s Funeral March.  Rollins and Hall’s second number was yet another concert highlight: “If Ever I Would Leave You,” a song the pair recorded for RCA in 1962 and one of Sonny’s studio masterpieces.  Rollins and Hall did not make Camelot a silly place, but instead injected a gentle Latin swing (a tad slower than the 1962 version).

With Hall and Sonny’s quintet having departed, Rollins introduced Christian McBride and, filling in one piece of the puzzle, invited the first mystery guest to the stage, fellow legend and jazz’s sharpest dresser, Roy Haynes (a man who cannot possibly be 85).  I got chills when McBride started his introduction of “Solitude.”  The trio, the same that shared the Carnegie Hall stage together in 2007, did not play the Ellington standard as a gentle ballad—ruthless swing would be a better description.  If the concert had ended here, it would have been a smashing success.

But the trio started “Sonnymoon for Two.”  After a couple minutes of meandering, Sonny stepped to the mic and told the crowd that there was a man backstage who was going to sing “Happy Birthday” to him and he had brought his horn.  Anticipation built.  The second mystery guest’s identity had been guarded quite well.  The trio continued to play with all three looking backstage.  A few minutes later, a gentleman in a dark suit with a pork pie hat slowly stepped out and walked towards Sonny.  When I saw a white alto saxophone, I nearly went into shock.  Mystery guest #2 was the patron saint of free jazz, Ornette Coleman, who proceeded straight to Sonny and shook his hand while bowing at the knee out of respect.  The crowd went nuts.

As a friend once said to me, Ornette always plays Ornette—and here was no different.  Coleman took the Rollins blues in a different direction.  Sonny watched intently, sometimes nodding approval and also looking up in thought.  When Sonny took his turn, he played more “out” than he probably had since the 1960s.  If this concert is viewed as a brief retrospective of Sonny’s early years, Ornette was filling in for the late Don Cherry.  All the while, I had never seen so many cell phones pop up at a concert to snap pictures or capture video for posterity.  And at this point, I don’t have much more to say about the meeting of these two icons, their first public performance (?), other than “I was there.”

With the exception of Ornette, all the musicians came back out to play Sonny’s most famous calypso, “St. Thomas.”  This amounted to a victory lap.  Even Sonny, notoriously self-critical, had to know what he had already accomplished.  For nearly two hours, Sonny stood on stage—no intermission and never once sitting down—and did not coast one bit, even though a loving audience would have forgiven the 80-year old man if he had needed a break.  Reflecting on this concert, I’m reminded of what Sonny told Stanley Crouch in a 2005 profile for the New Yorker:


I know what I got from Coleman Hawkins, from Ben Webster, from Dexter Gordon, from Don Byas, from Charlie Parker, and all the other guys who gave their lives to this music.  I know that without a doubt…So now, after all these years, it's pretty clear to me, finally. All I want to do is stand up for them, and for the music, and for what they inspired in me. I'm going to play as long as I can. I want to do that as long as I can pick up that horn and represent this music with honor. That's all it's about, as far as I can see. I don't know anything else, but I know that.

And, thankfully, once more, I had the privilege to stand up and applaud Sonny Rollins, the greatest living jazz musician.
Posted by Pamela Espeland at 12:28 AM