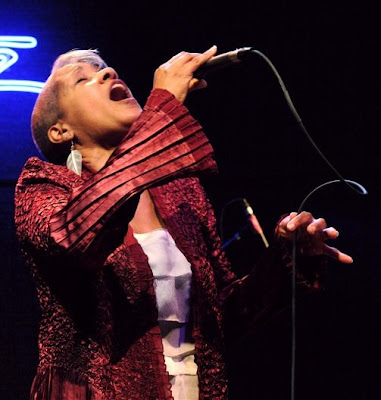 Singer Rene Marie gave an inspired, inspiring, and at times deeply moving performance at the Dakota on Sunday night. More than once during the evening, I looked around at the crowd to see people dabbing at their eyes, overcome by a song’s message and delivery. I was among them.

Marie sings the truth. Her songs, including many well-written originals, are about her life experiences, her feelings, her convictions and beliefs. If she sings a standard, she makes it her own. And if you’re in the room, you feel her feelings. Especially in live performance, she opens a direct emotional channel with her audience. She gives you more than words and melodies, sound and breath. She gives you joy, grief, passion, and pain. If you’re open and receptive, you come away knowing more about her, and more about yourself. 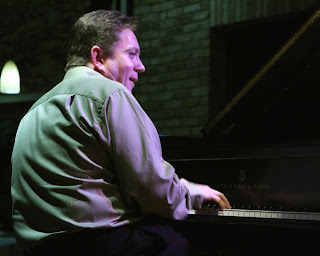 She began the first set of two with Dave Brubeck’s “Strange Meadow Lark,” starting low, soft and swinging, accompanied at first by Rodney Jordan’s bass and then by the rest of her remarkable trio, slowly building and bursting forth. Here’s a recent video of Marie singing this song with her trio and trumpeter Jeremy Pelt.
The second song was an act of generosity and thanks. Artist Catherine L. Johnson was in the house, and she had brought Marie a gift: a print from her Sparrow series and a written description of what the sparrow means to her. Marie sang the first verse to the gospel hymn “His Eye Is on the Sparrow,” then read Johnson’s words (which were lovely), then paused, seemed to gather herself, and segued into Mentor Williams’ “Drift Away,” a song that has been covered by everybody and his sister (“Give me the beat, boys, and free my soul/I wanna get lost in your rock and roll and drift away…”). It was seamless and perfect, and Marie transformed a soft-rock chestnut into a song of revelation and thanks.
This may have been the moment we all knew we had stumbled onto something remarkable, one of those performances that would stay with us for a long time.
Marie calls her current tour “Voice of My Beautiful Country” and describes it as “the musical soundtrack of my life so far.” That gives her a lot of music to draw from. At the Dakota, she blended the old Jimmy Van Heusen song “Imagination” (“Imagination is crazy, your whole perspective gets hazy”) with the Temptations’ hit “Just My Imagination (Running Away with Me).” She sang “White Rabbit,” the acid rock classic from Jefferson Airplane’s 1967 album “Surrealistic Pillow,” which she and her trio turned into a lengthy, exciting jazz composition. 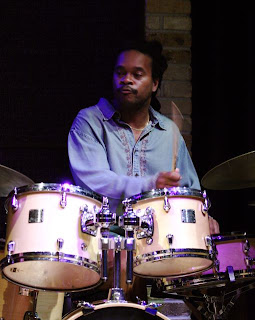 We also heard several originals including “Vertigo,” the title track to her second CD with her former label MaxJazz. And a saucy “Rim Shot,” which she introduced by explaining that she wrote it as a way to get her drummer to play rim shots when she wants, not only when he wants. (A rim shot is a sharp sound made by hitting the drum head and rim at the same time.) Actually, the song seems more like an excuse for spicy lyrics, which she sang with considerable relish. (Think Alberta Hunter's "Handyman.") A showy, tongue-in-cheek solo by drummer Quentin Baxter at the end sent Marie into gales of laughter. (Gasping, she said, “I think that song was retired tonight.”) Kudos for her clever rhymes for “rim shot,” among them “caveat,” “coffee pot,” and “astronaut.”
Marie is known for writing provocative songs about issues that concern her deeply: homelessness, racism, violence, abuse. She introduced the puzzling, disturbing “Weekend” by saying “Here’s a bedtime story for you all,” then raised eyebrows with a song about a wife who is beaten by her husband and, later that night, seduced by a stranger who binds and blindfolds her. No unequivocal meanings or tidy endings here. People have asked her about this song, and you can read her response on her website.
“And now for a little change of pace,” she said wryly, introducing the evening’s finale, the stirring “Voice of My Beautiful Country” suite. Marie has taken the patriotic tunes we all know—“America the Beautiful,” “America” (“My Country, ’Tis of Thee”), and “The Star-Spangled Banner”—and set them to different melodies (or, in one case, stayed with the melody but used different lyrics). 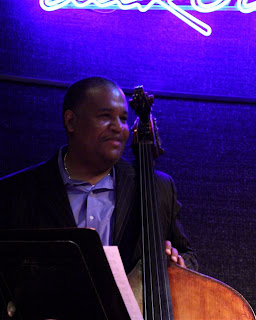 “America the Beautiful” is a jazz tune, with scatting; “America” a gospel song I could imagine Aretha Franklin wanting to sing; “The Star-Spangled Banner” is the melody we know, but the words are those of James Weldon Johnson’s “Lift Ev’ry Voice and Sing,” also known as the Black National Anthem. This is the song that got Marie into deep doo-doo in Denver in 2008, when she was asked to perform the national anthem before the city’s State of the Union address and sang this instead.
Hearing it live, I can understand why people were surprised, but not why they were angry. Marie’s version is reverent and heartfelt. Her merging of the official national anthem with what the Congressional Record calls “the official African American National Hymn” is more an affirmation than a sign of disrespect. She’s saying, “We are all Americans.” Which seems like a message we’re badly in need of hearing today.
The suite ended the show and no one called for an encore, which would have been anticlimactic. We had heard something special and we knew it. Afterward, pianist Kevin Bales came out to say hello, to praise the piano (a 9-foot Steinway the Dakota brought in early for Ramsey Lewis’s two night stay on Sept. 6–7), and to thank us for listening. When someone commented on how excellent the trio was, and how this clearly wasn’t a singer-with-a-backup-band situation, he said that Marie brings out the best in each of them, and “I don’t play that way with anyone else.”
The trio—Bales on piano, Jordan on bass, Baxter on drums—deserves a glowing review all its own. Marie left ample room for solos, which were happily received by the crowd; the affection and creative energy they shared was palpable. I started to say that Bales shone especially brightly, that his inventiveness on the keys was a high point, but then I remembered equally thrilling contributions from Baxter and Jordan. During the “Voice” suite,” Baxter played a lengthy and riveting solo that was part Native American drumming, part African drumming, part Revolutionary and Civil War soldiers marching off to war. Jordan’s double bass was many things—a gorgeous voice, a steady beat, a pair of big, warm arms holding the group together. 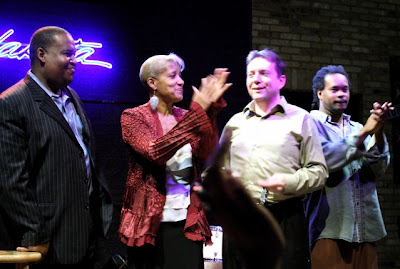 What a satisfying, surprising, thought-provoking pleasure the evening was. This was Marie’s first appearance at the Dakota for six years, during which she moved to Denver, left her label, remarried, temporarily retired from the road, and became better, stronger, more powerful and convincing. I’m hoping we don’t have to wait another six years to hear her again.

Photos by John Whiting.
Posted by Pamela Espeland at 8:03 PM