What I'll see at the 53rd Annual Monterey Jazz Festival and why: Friday 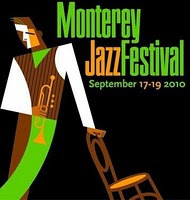 This will be my sixth year at the Monterey Jazz Festival. I'm still a newbie compared to those who have been coming here for decades (there are many), but I know where the venues are, where to find samosas and sterling silver jewelry, and why it's good to visit the merchandise tent early in the festival (because otherwise the T-shirt you want will be sold out). I know to carry an extra layer or two of clothes because it gets chilly in the Arena at night.

I know it's perfectly fine to see part of a set by one artist or band and move on to another (someone will be grateful for your seat or spot on a bleacher). I know I won't see everything I plan to see. I'll be en route to the Coffee House when a siren song from the Garden Stage will lure me in. Or I'll head for Dizzy's Den and run into a friend and we'll stand there talking or go for a beer.

And I know there's someone I'll later kick myself for missing. That's the way of Monterey.

Because I live in the Twin Cities, home to the Dakota, the Artists' Quarter, numerous other venues, and jazz series at Orchestra Hall and the University of Minnesota, I have seen many of the artists who will perform at this year's festival. Does that mean I'll pass on Chris Potter's Underground or Fred Hersch? Uh, duh, no. It means I'll arrive early.

Here's my hour-by-hour schedule for the first night of this year's festival.

6:30 pm Ben Flocks Quartet, Garden Stage
Young saxophonist Flocks is in the enviable position of performing at a time when nobody else is. Usually there are four or five things going on at once and you have to make a painful choice. For the first hour or so of the festival, he is the festival. We saw Flocks perform in St. Paul in 2008 with other Brubeck Institute fellows and liked him.

8pm Marcus Roberts Trio (Coffee House)
A performance by pianist Marcus Roberts is a jazz history intensive, delivered with passion, poetry, and soul. I've seen him several times over the years, basically whenever I had the chance, and each time has made me feel a lot smarter about jazz and more in love with the music. With Roland Guerin on bass, Jason Marsalis on drums.

Unlike most of the rest of jazz, MJF performances start on time. So I can hear a half-hour of Roberts' trio, then dash across the way to the Arena for...

8:30 pm Roy Hargrove Big Band with special guest Roberta Gambarini (Jimmy Lyons Stage—Arena)
For those who may not know, Hargrove and Gambarini share a label (Emarcy) and a manager (the estimable Larry Clothier). I've heard the amazing, inventive, scarily brilliant Hargrove several times--he's a regular at the Dakota Jazz Club in Minneapolis--and I adore Gambarini, whose voice has the purity of Waterford crystal. I've never heard Hargrove's big band. Hyperventilating at the prospect.

9:50 pm Les Nubians (Jimmy Lyons Stage—Arena)
I've not heard this Afropean/funkin' fashion/modern Amazon group, though it sounds like a lot of fun.