JoAnn Funk doesn’t sing a song as much as she whispers it in your ear. Sometimes her voice is silky and warm; sometimes it’s hot; sometimes it tickles. She’s part Blossom Dearie, part Dusty Springfield, a bit Nellie McKay, a hint of Norah Jones, a dash of Stacey Kent, a splash of Diana Krall (like a smoky Scotch on ice), yet somehow all those references to other singers with breathy voices fade the more you listen to JoAnn.

At first you can’t help wondering, “Who does she sound like?” and then you realize—she sounds like herself. It’s what we want from every singer.
Her new CD, Pick Yourself Up, is only her third, after Holidays (2000) and Solo Piano (2003). Her singing has changed since Holidays, which is mostly instrumental, though we get a hint of what’s to come with “Let It Snow!”
Since 2008, she and bassist Jeff Brueske have had a regular weekend gig at the elegant Lobby Bar in the historic Saint Paul Hotel. In her liner notes, she thanks the hotel staff for “giving us a chance to incubate jazz in the Lobby Bar, where so many of these arrangements originated.” Good things can happen when artists have the chance to play together in the same place for a long period of time. 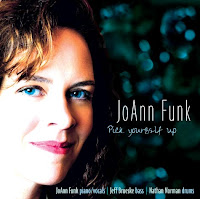 Pick Yourself Up is a mix of familiar standards (the title track, “Girl from Ipanema,” “If I Had You,” “Two Sleepy People”) and songs heard less often. The Gershwins’ “He Loves She Loves” (also covered by Stacey Kent, whose version is more straightforward) features deep, rich arco notes on Brueske’s bass and soft brushes from Nathan Norman, whose sensitive, expressive drums throughout make this a trio recording.
Leonard Cohen’s “Dance Me to the End of Love” was done a few years back by Madeleine Peyroux; JoAnn’s version is more inventive and seems truer to the spirit of Cohen’s original, while not sounding at all like it. Her musical pas de deux with trumpeter Greg Lewis (in his only appearance on the CD) is playful and unexpected.
Like many women jazz singers, JoAnn accompanies herself on the piano, and you realize as you listen to Pick Yourself Up how nice that must be for a singer, how ideal, to have a piano player who gives you exactly what you want.
“If I Had You” begins as a spare, sensuous bass-and-voice duet; when JoAnn adds piano (at around 1:15), it’s delicate and understated. She sings Jobim’s “Triste” in Portuguese, planting one foot firmly in the Brazilian tradition of spacious, relaxed singing, then lets her piano lead. Jeff and Nathan both shine. "Triste" is the CD's longest track and it’s delightful.
The arrangements are out-of-the-ordinary; all are by JoAnn. “You’re Getting to Be a Habit with Me” experiments with rhythms before settling into an easy swing. (Although, once you’ve heard it, you can detect the melody in Norman’s opening drums.) “What Is There to Say” begins with a bit of arco bass before turning into a song of pure bliss (“The dream I’ve been seeking has, practically speaking, come true… I knew in a moment contentment and home meant just you”).
In a nod to Dearie (and probably Maurice Chevalier as well), JoAnn delivers a sassy, upbeat “Moonlight Saving Time.” Hoagy Carmichael’s “Two Sleepy People” is the perfect ending, especially if you listen to Pick Yourself Up late at night, which I highly recommend.
Throughout, there’s a sense of casual, effortless, very skilled swing. All but three of the 11 songs date back to the 1920s and ’30s, which infuses Pick Yourself Up with a bouquet of timelessness. JoAnn’s arrangements are intimate and personal, and her camaraderie with Brueske and Norman makes this feel like a true collaboration.
Even when JoAnn’s interpretations seem mannered, which they sometimes do, she wins you over with her confidence and her storytelling. You’ve probably never heard “Girl from Ipanema” sung the way she sings it. Go with the flow and you won’t be sorry.
JoAnn and Jeff (and drummer Nathan Norman) will celebrate the release of Pick Yourself Up on Saturday, April 2, in the Lobby Bar. I’ve had amazing martinis there and the chilled shrimp cocktail is classic.
Posted by Pamela Espeland at 5:26 PM