Are you in your car or near a radio at 8:30 CST on Friday mornings? Tune to KBEM to hear me and Mr. Jones—Jazz 88 "Morning Show" host Ed Jones—talk about these events and more. 88.5 FM in the Twin Cities, streaming live on the Web.

Friday: Ginger and Bobby Commodore Birthday Party at the Dakota

March 11 was Ginger's birthday, and Bobby's was March 4. Celebrate with Ginger's powerful vocals, Bobby's peerless drums, and their potent mix of jazz, soul, and R&B. I heard Ginger just last week, singing with Moore by Four. When she lets loose, hold on to the cutlery. With Lee Blaske on piano, Mark Weisberg on bass.
8 p.m. Friday, March 18, Dakota ($10).
Friday and Saturday: Patty Peterson and Friends at the Artists' Quarter

The popular singer, entertainer, and radio personality brings her posse to the AQ: Bobby Vandell, Billy Franze, Peter Schimke, Paul Peterson, and Jason Peterson DeLaire will all crowd onto the stage beside her. Patty has won seven Minnesota Music Awards, and she's about to release her fourth solo jazz CD. It's always a good time when the Petersons take over a room.
9 p.m. Friday and Saturday, March 18 and 19, Artists' Quarter ($12).
Saturday: Laura Caviani and Pete Whitman at St. Barnabas Center for the Arts

The relaxed, family-friendly "Jazz@StBarney's" series continues with another estimable Twin Cities musical couple: Laura on piano, Pete on saxophones, clarinet, and maybe the flute as well. (Try saying "Laura Caviani on piano" and it might come out as "Laura Caviano on piani," which happened to me this morning on the radio. Sorry about that, Laura.) Laura is one of our premiere pianists; I look forward to her annual Thelonious Monk tributes at the AQ. Pete heads the Brass and Woodwinds department at McNally Smith College of Music.
7 p.m. Saturday, March 19, St. Barnabas Center for the Arts ($10/$7/$5).
Saturday: Marc Ribot at the Cedar Cultural Center

Read my interview with Ribot here. The New York-based guitarist will like play a few selections from his ethereal new CD, Silent Movies, before the evening's main course: a live soundtrack on solo guitar, much of it improvised, to Charlie Chaplin's 1921 silent film classic The Kid. I've heard several live soundtrack performances (one of my all-time favorites: Patrick Harison's solo accordion accompaniment to Vittorio de Sica's The Bicycle Thief at the former Armatage Room). Something special happens at a movie with live music. The immediacy of the music and the presence of the artist(s) adds a new dimension to the experience. And if the music is partly or mostly improvised, even better.
8 p.m. Sunday, March 20, The Cedar ($18/$20).
Sunday: Milo Fine at Studio Z 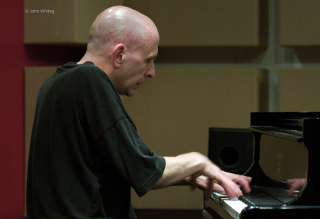 This is part of the Twin Cities Jazz Society's "Jazz from J to Z" series—and a considerable departure from the concerts they usually sponsor. Milo has long been one of the Twin Cities' most original and iconoclastic musicians. He plays free jazz with the emphasis on "free"—unfettered, unpredictable, personal. Ethan Iverson of The Bad Plus has called Milo "the most career-allergic musician on the planet" while praising his unique sound and formidable technique. (Read my interview with Milo here.) Sunday will feature two trios: Milo (drum set [bowed cymbals] and piano) and Stefan Kac (tuba) + John O'Brien (cornet, flugelhorn), and Milo and Stefan + Scott Newell (tenor sax, voice). Knowing Milo, the concert will start promptly at 7.
7 p.m. Sunday, March 21, Studio Z ($10/$8/$7).
8 p.m. Thursday, March 24: "The Music of Charles Mingus: Meditations on Integration" at MacPhail 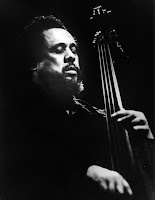 Last year MacPhail Center for Music received an NEA grant to present the music of the great American composer Charles Mingus, and jazz coordinator Adam Linz has been making it happen ever since, presenting a series of concerts called "Meditations and Revelations" and weaving Mingus' music through MacPhail's curriculum. This is, I believe, the final concert of four in this popular series; word has been getting around, and each audience is larger than the last. With Adam on bass, Bryan Nichols on piano, Michael Lewis and Chris Thompson on saxophones, Greg Lewis on trumpet, Scott Agster on trombone, and JT Bates on drums. Special guests: The Dakota Combo, an elite group of high school musicians chosen by audition and taught by Adam. In February, the Combo took part in the third annual Charles Mingus High School Band Competition in NYC and brought home the Mingus Spirit Award. I'll lead a Q-and-A with the artists starting at 7.
8 p.m. (Q-and-A at 7) Thursday, March 24, MacPhail ($10/$5).
Check the live jazz calendar at the right or here for many more events.
Milo Fine photo by John Whiting.
Why won't Blogger let me wrap text around photos, as usual? I haven't a clue.
Posted by Pamela Espeland at 9:25 PM