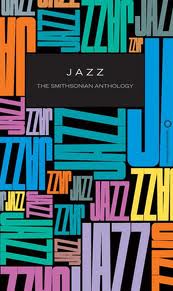 It wouldn’t be a fair fight. Put in the same ring, the 10,000-pound gorilla JAZZ: The Smithsonian Anthology (let’s call it JTSA) would pummel little Putumayo Presents Jazz (PPJ).
Each, briefly:
• JTSA: 6 CDs, 111 tracks spanning the years 1899–2003, 200-page booklet. Compiled by an executive committee of five jazz scholars including John Edward Hasse and Dan Morgenstern, aided by an advisory panel of 42. A “jazz appreciation course in a box.” SRP $107.98.
• PPJ: 1 CD, 12 tracks, most recorded in the 1950s, liner notes by WWOZ (New Orleans) DJ Joel Dinerstein. The press release cites label founder Dan Storper’s “increased exposure to jazz since moving to New Orleans.” Apparently Storper listens to Dinerstein’s show a lot. It reminded him of “how much I still loved the songs of my parents’ generation.” SRP $14.98. 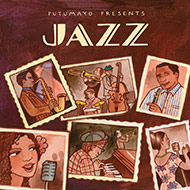 Putumayo World Music has always seemed like a personal label to me, led by the interests of its founder. Since Storper’s relocation to NOLA in 2003, the label has produced several jazz collections including New Orleans, Jazz Around the World, Latin Jazz, Women of Jazz, and the most recent, Jazz, due out May 3.
New York Times jazz critic Ben Ratliff does not much like JTSA. In his review published March 17, he asks, “How could such a righteous cultural product, full of so many sublime parts, feel so cumulatively limp?” Then: “What’s missing is its desire to be any more than a list, rather than an argument or a thesis.” And: “The new Smithsonian anthology is fair minded, which is to say strangely anonymous. Though the essays are signed, one can’t be sure whether the signers chose the tracks, and you won’t find out how the anthologizers, individually or as a body, really feel about anything in particular.”
I’ll probably buy JTSA anyway, sooner or later, and stack it on top of my copy of The Smithsonian Collection of Classic Jazz (1987 edition), about which Ratliff has far kinder things to say. JTSA seems like the sort of reference that belongs in a music library, the equivalent of a music dictionary or encyclopedia.
I doubt that Ratliff will review the Putumayo collection, which I’ve been listening to for the past few days and like very much. Although Putumayo World Music is a success in a time when labels are becoming anachronisms, it’s not taken seriously by most music critics.

All of its releases are compilations. Its tag line, “Guaranteed to make you feel good!” is not what real music is supposed to be about. Its origins are too commercial, its marketing too nontraditional (and aimed largely at women).
In the early 1990s, Storper owned a small chain of boutiques that sold imported handmade clothing, arts, and crafts. One day, the story goes, he walked into one of his shops and heard an in-store cassette playing rap, thrash rock, and techno.

The music didn’t fit the message he wanted to convey, so he went home and made his own mixtape of world music. Customers loved it. Storper founded Putumayo the music label in 1993 and sold Putumayo the clothing company in 1997.
From the start, Putumayo’s marketing has been outside the box. Long before Starbucks and Restoration Hardware sold CDs, Putumayo had built a network of thousands of specialty retailers—bookstores, gift stores, boutiques, coffee shops—that not only sell its CDs but also play them during business hours.

I have not been immune to the charms of this music on my own happy shopping expeditions. (I love World Lounge and New World Party in particular.)

Another unique part of its marketing strategy: If you buy a Putumayo CD you don’t like, you can return it for a full refund. The company calls this its Feel Good Guarantee.
Each new Putumayo release, including Jazz, still feels like a mixtape, a compilation made by a friend who really wants you to hear this artist or group, that song or tune. Isn’t that what every compilation should be? What if JTSA had been put together by one person who’s passionate and knowledgeable about the music? (The 1987 Smithsonian collection bears Martin Williams’ stamp.)
Last year I took a class called “Jazz History and Listening” at the West Bank School of Music. The teacher, Stefan Kac, is a well-educated jazz and classical tuba player in his 20s with strong opinions of what’s worth hearing and why. Over a period of 8 weeks (that turned into 9), he led us on a merry chase that started with music by Louis Moreau Gottschalk (Souvenir de Porto Rico, "Marche des Gibaros,” composed in 1857) and ended with the Keith Jarrett Standards trio of 1999 (“What Is This Thing Called Love”). We didn’t make it into the 2000s, which would probably have taken another 8 or 9 weeks. (Stefan, when you offer that class, please let me know.)
Kac’s syllabus included 87 tracks, and we didn’t fit them all in; even with the bonus class, there wasn’t time. But it was clear that Kac really wanted us to hear each piece of music he played for us. It wasn’t just a list, and it didn’t feel anonymous at all. It was personal.
Which is precisely how Putumayo Presents Jazz feels (and sounds). Personal, and warm. This is not music that will transport you or transform you, challenge you or crack your head open. It will, however, make you feel good. And that's not all bad.
How could you not take pleasure in Nina Simone’s upbeat, bouncy interpretation of “My Baby Just Cares for Me” from her debut album, Little Girl Blue (1957)? Or Chet Baker’s silky, sunny version of “There Will Never Be Another You”? Or Bill Evans’ lilting “Waltz for Debby” with the surprise of Cannonball Adderley on alto sax? Even Billie Holiday sounds chipper as she sings “Lover, Come Back to Me,” backed by Ray Brown on bass and Oscar Peterson on piano.
Here’s the whole track list:
1. Nina Simone: "My Baby Just Cares for Me"
2. The King Cole Trio: "’Deed I Do"
3. Maxine Sullivan: "’Tain’t No Use"
4. Louis Armstrong and Oscar Peterson: "I Was Doing All Right"
5. Zoot Sims: "Someone to Watch Over Me"
6. Chet Baker: "There Will Never Be Another You"
7. Anita O’Day: "It Don’t Mean a Thing (If It Ain’t Got That Swing)"
8. Hampton Hawes: "The Sermon"
9. Blossom Dearie: "They Say It’s Spring"
10. Mose Allison: "Don’t Get Around Much Anymore"
11. Cannonball Adderley with Bill Evans: "Waltz for Debby"
12. Billie Holiday: "Lover Come Back to Me"
This is not a cookie-cutter standards collection. I hadn’t heard most of these tracks before, and one of the artists, Maxine Sullivan, was new to me. (She reminds me of Diana Krall.) Storper describes these tracks as “exceptional, relatively obscure songs.” Maybe they were chosen because their obscurity made them affordable. But it doesn’t feel that way. It feels like these are songs that Storper wants people to hear.
By the way, JTSA includes none of these tracks and skips half the artists: Simone, Sims, O’Day, Hawes, Dearie, Allison. (No Nina Simone? Seriously?)
I’ll use JTSA as a reference (eventually, once I've saved up the $$ to buy it). But I’ll listen to PPJ—at home, in the car, as a soundtrack for dinner parties. It will be a living thing in my music collection.

With Jazz, Putumayo has done what it has always done, and what it is very adept at doing: put out a CD of good music that almost anyone can enjoy. Newcomers to jazz won't suddenly develop a yen for Coltrane or Cecil Taylor, Mingus or Monk, but they may think, "Hey, this jazz isn't so tough after all. Maybe I'll go find some more." Aficionados won't be illuminated, but they may appreciate the pulling together of lesser-heard versions of familiar jazz tunes. And the people in between, who listen to jazz occasionally, will be happy to add this to their collection.
Posted by Pamela Espeland at 1:13 PM