Tenth in a series. After almost 20 years in St. Paul – first on Jackson Street in Lowertown, then in the Hamm Building near Rice Park – the esteemed and beloved Artists’ Quarter jazz club will close January 1. As we near the end of a jazz era, we’re asking musicians (and a few others) whose lives have been shaped by experiences at the AQ to share their three favorite memories of the place, the people, and the music.

My first encounters with the Artists’ Quarter involved driving from my home in St. Peter to the 26th and Nicollet location on Sundays to hear the Eddie Berger Quartet. Eddie’s singular alto tone filled the room, and the band – Mikkel Romstad, Tom Hubbard, and Phil Hey – swung hard with him. Of course, at that time and in that location, the place attracted some interesting neighborhood denizens. I remember Eddie once spending an entire band break trying to convince the woman who was there with a stringless guitar in a cardboard box to sit in on the next set. No such luck.

I remember hearing many legends play there, like Dannie Richmond taking Phil Hey’s chair on the drums with Tom Hubbard’s great Tribute to Mingus band. In those days, Eddie [Berger] hosted a jazz show on KFAI and did an interview with Dannie that was all about playing saxophone and drums. I had recorded it and years later, shortly before Eddie passed, I gave the cassette to him.

The 26th and Nicollet location had wind instruments hanging from the ceiling by wires. One night, while Pete Christlieb was playing, local multi-instrumentalist Billy Shiell (in an enhanced state of mind) climbed onto the bar, grabbed a trumpet that was hanging from the ceiling, and blasted a few notes. Christlieb didn’t miss a beat and said from the bandstand – in perfect dry, Rodney Dangerfield delivery – “Hey, this is MY gig!” The room fell out laughing and Billy got bounced.

I came to jazz later than most, and those years were very early in my path. [AQ owner] Kenny [Horst] pointed me to the music of Hank Mobley, who became one of my most formative influences. Eddie, before I’d actually met him, introduced me to Dewey Redman by taking a Richie Cole record out of my hands at a record store, handing me “The Struggle Continues,” and saying in his raspy voice, “Here, listen to this instead.” Phil Hey, Gary Berg, and so many other players showed me incredible generosity with music and guidance.

The Galtier Plaza [Fifth and Jackson] and Hamm Building locations are, for me, a saturating blur of memories as a jazz spectator or participant. Always, the people involved supported and shared without hesitation. So many strong and unique musicians, I can’t even attempt to list names. I don’t think it’s hyperbole to say the Artists’ Quarter holds an important place in jazz history.

Thank you, Kenny Horst. I hope your next chapter brings nothing but happiness.

1. The very first time I set foot in the Artistsʼ Quarter, I had just turned 21. I went out on a Tuesday to hear Organ Night with Billy Holloman. Kenny Host was playing drums and Gary Berg was on saxophone. I found a table fairly close to the stage near the B-3. That was also the first time I had experienced the Hammond B-3 up close. I was terrified (in the best way possible!).

They played a lot of tunes I recognized – “Take Five,” “Billyʼs Bounce,” etc. – but I couldnʼt help being over taken by how relaxed they were and how much fun they were having with the tunes. Their personalities were really shining through the music.

My experience with jazz up until that point had been more academic and much more of a struggle. I was tied up with trying to play jazz “the right way” and felt the pressure of measuring up to all the greats every time I played.

I learned a great lesson that night listening to Kenny, Gary, and Billy. They were jazz happening right in front of me that night … confident, playful, and joyous!

2. The AQ was the first place I saw Happy Apple perform. I had been studying with Dave King for about two months at that point. He specifically told me to come see Happy Apple at the Artists’ Quarter.

I got there early and still couldnʼt find a place to sit until the end of the first set. It was packed! I didnʼt care about having to stand at all once the band started. I was blown away, they were amazing! I had never heard a group play like that. Easily one of the best musical experiences of my life!

I stayed until they closed the bar, still trying to fully realize what I had heard! Thatʼs all I have to say about that.

3. It was a rare occasion where my dad was in town for the weekend. I had no gigs that he could come out to see, so I decided to take him to the Artistsʻ Quarter. Now, Iʼm pretty sure my dad knows who Louis Armstrong and Billie Holiday are, but thatʼs pretty much the extent of his jazz knowledge. Heʼs more of a “three chords and the truth” kind of guy … but I didnʼt care! We went down the steps, paid the cover,(1) and got a table in front.

Anthony Cox, Mike Lewis and JT Bates were playing! I went into the mode that I think a lot of musicians do at a show – I had my music ears on. I was trying to figure out the form of the tune as it went by, or “what was that phrase that JT just played?” They were playing some intense music!

After about 45 minutes, [I realized I had forgotten] that I was there with my dad. I looked over and he had his eyes closed. I asked him on break if he was enjoying the music or if he was bored.

I was not prepared for his response. “I donʼt understand jazz the way you do,” he said. “Iʼm just closing my eyes and listening … letting the music take me places.” For the rest of the weekend and to this day, he will still bring up that night and how much he enjoyed it. A great memory for me as well! 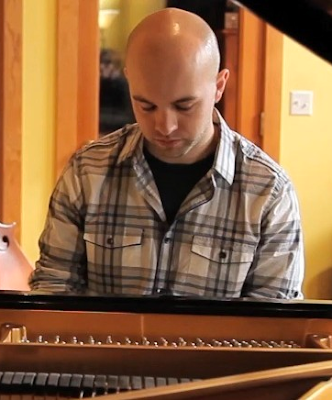 Wow, what a great club with so many things that I could say. I’ll miss this place, but I will remember it fondly, and I really appreciate the opportunity to play there regularly over the years.

1. First and foremost is the Tuesday night gig with the Cory Wong Quartet. All of us were either wrapping up college or freshly out of school when we first started the gig in October of 2007, and we were soooo green! Listening to old recordings of our first few months there is a humbling trip back in time. We all cut our chops at the AQ, and it was such a wonderful chance to compose, learn, hone our abilities on our instruments and make lifelong friends. It was really cool of Kenny to host such an inexperienced group of players – something he didn’t have to do – and it absolutely, positively impacted each of us professionally and personally.

2. There have been so many great shows that I’ve seen at the AQ. I’ll touch on three of my favorites here. Bill Carrothers, Kenny Horst, and Billy Peterson: what a beautifully synergistic trio, and Bill’s ballad solo playing just absolutely resonates with me every time. Ari Hoenig: he’s such an unbelievably melodic drummer, and I’ll never forget his slamming version of “Moanin’.” Roy Haynes Fountain of Youth Band: it speaks volumes of the status of the Artists’ Quarter that Roy Haynes chose to do a live recording here. I love that album, and I like to say that you can hear me cheering in the background. There was a group of McNally Smith drumming students who were sitting right next to Roy that night, and it was really cool how interactive and receptive Roy was to them.

3. One of my favorite shows that I’ve ever played in my entire life was at the AQ. I brought up a bunch of my high school friends from Missouri who are MONSTER players, who were instrumental in leading me toward jazz in the first place. (Hermon Mehari, trumpet; Zach Beeson, bass; and Brian Steever, drums.) The place was packed, and we played some of the most creative, organic, and exciting music that I’ve ever been a part of. There was that magical atmosphere that night at the AQ that you can’t find at any other music club in the Twin Cities. What a wonderful club that I will always remember!

Note: (1) One reason so many young jazz musicians have frequented the AQ over the years is the famously low cover. I don’t know what the cover was on 26th and Nicollet or Fifth and Jackson, but for the years we’ve been going to the Hamm Bldg. location, we never paid more than $20 or maybe $15 to get in the door, no matter who was playing. On most weeknights the cover was $5 or free, and even on weekends it was $10 or $12. Plus the drinks were generous and affordable.

I would complain to Kenny all the time that the cover charge was too low. (Being an accountant, and having done accounting for bars and restaurants, I think I knew more than anyone, except for Kenny, how financially precarious his business was. I’ve been worried about the AQ’s continued existence for years.) A few years back, I finally asked him why he kept the cover so low. His answer? “I want everyone, especially young people, to be able to afford to come here. If young people can’t afford to listen to the music and come to the club, then there will be no future for this kind of music. However,” he said with a grin, “if you want, I’ll charge YOU more for the door than anyone else.”

Posted by Pamela Espeland at 9:30 PM