Fifth in a series. After almost 20 years in St. Paul – first on Jackson Street in Lowertown, then in the Hamm Building near Rice Park – the esteemed and beloved Artists’ Quarter jazz club will close January 1. As we near the end of a jazz era, we’re asking musicians (and a few others) whose lives have been shaped by experiences at the AQ to share their three favorite memories of the place, the people, and the music.

The AQ is a beautiful pearl in the ocean. There is no place like it on the planet. You can travel all across this country and try to find a club like the AQ; it’s not going to happen.

Many magical moments have happened to me at the AQ. One of these moments happened when Tom Harrell was here. At first, his stance and demeanor belied his sound (which was exquisite, as Pamela and JT have already described), but later in the set, the magnificent Irv Williams sat in. There, in this packed club, during the middle of Irv’s solo, Tom’s stance was suddenly transformed: he stood straight up and positively beamed at Irv. The audience’s response was palpable: can you say “Group Gasp”? From then on, the musical communication between Irv and Tom set the place on fire, and it was one of the most riveting nights of music I’ve ever witnessed. The club was filled with people who were completely engaged in the musical process, but you could still hear a pin drop, it was so quiet. No, there’s no place like the AQ.

Where would this jazz community have been all these years without the Artists’ Quarter? What would young jazz musicians have done if they hadn’t been able to cut their teeth at the AQ? [Owner] Kenny Horst’s calm and unfailing support has allowed musicians to explore in their own way, with no limitations, no demands, no “turn it down” or “your break’s too long.”

We owe Kenny and Dawn and their whole family a HUGE debt of gratitude. Creativity abounds in this kind of nurturing environment, and we are all better people for the AQ.

May this club continue on, somehow, so that younger generations can keep this important art form alive in the Twin Cities.

Thank you, Kenny and Dawn!

I’ve had the pleasure of preparing calendar notes and doing publicity work for the AQ for close to ten years. I often hear reference to the “AQ family,” and it is a very real thing encompassing a lot of different people. Anyone who has been touched by that dynamic is going to feel some extra emotion this holiday season …

Roy Haynes: “Whereas.” The 2006 weekend during which the legendary drummer Roy Haynes recorded a live CD at the AQ(1) was special for many reasons. Just the fact that a jazz icon of Roy Haynes’ stratospheric standing chose to record at the club said so much. This guy could have recorded anywhere. It was a tribute to the club, to the jazz fans of Minnesota, and to Roy’s good friend and AQ owner Kenny Horst. The City of St. Paul declared it “Roy Haynes Weekend,” which also spoke highly of the AQ’s status in its hometown. Mr. Haynes named the CD “Whereas,” a reference to the beginning of each clause in the proclamation from the City. But beyond all of the symbolic meaning, Roy Haynes smoked it all weekend long (and earned himself a Grammy nomination for Best Jazz Instrumental Solo). A thrilling three-night stand of jazz and, for me, an introduction to the stunning talent of alto sax man Jaleel Shaw. That sort of discovery happens all the time at the AQ.

Mose Allison. The first time I heard a Mose Allison record, I was a young man, barely of drinking age, shooting pool at a bar. Mose came on the jukebox and I was hooked. That sound was mystical to me, and I assumed the singer/pianist was from another, long-ago era. Man, did I have a lot to learn. Experiencing Mose up close in the intimate confines of the AQ has always been a special event.

Speaking of Special Events … What can I say – the best day of my life was spent at the AQ.  My wife Tabitha and I got married in Rice Park and held the afterparty at the club.  It was a Sunday, and Kenny and Dawn Horst, David Horst, and so many others went to great lengths (on their day off) to make it an incredible memory. We were humbled to have a brilliant array of talent take the stage: Irv Williams, Carole Martin, Kenny Horst, Peter Schimke, Terry Burns, and Rick Germanson, plus impromptu performances by Dawn Horst, Lucia Newell, and Billy Peterson. (All preceded by Dan Newton’s accordion serenade through the streets of St. Paul.) Both on the stage and in the house, the AQ family was well represented. Wow – thank you all, again.

So, the jazz has been magnificent – as have been the people that make the AQ such a one-of-a-kind place. That whole tone is set by Kenny Horst. His integrity and kindness, his good humor, and his devotion to jazz inform the entire AQ experience. My admiration for the man is off the charts. I’m not alone.

The first memory that comes to mind is definitely the New Year’s Eve gig when I first played with Carole Martin. Man, we hit it off from the first note and we all had so much fun that night. Especially when she sang “Canadian Sunset”!

Also, the times when [trumpeter] Zack Lozier, my nephew, sat in with me.  I am so proud of him and what he's accomplished. He’s like my little brother, and I remember when he first started on trumpet.

And finally, when my parents would make it there, and also when I brought my son Eliot with me and he tried to get on stage during the gig. That was very cool.

But really, it’s ALL the times there! It was playing and hanging with Kenny and everyone there – the staff and the fans who supported us. We always had a great hang.

Note: (1) The great Roy Haynes was probably the most famous musician who recorded live at the AQ, and he’s certainly the only Grammy nominee (for his drum solo on track 4 of “Whereas,” a tune called “Hippidy Hop”). But the AQ was home to several live recordings over the years. Here’s Don Berryman’s list: 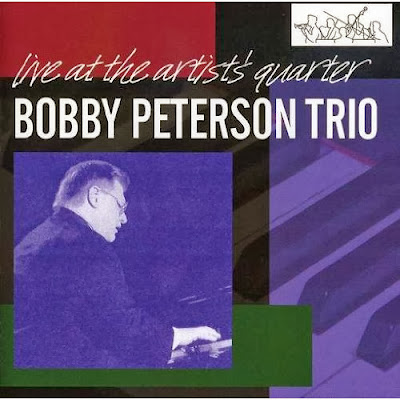 Don writes: “Then there was a series by Ben Sidran’s label ‘Go Jazz’ recorded live after hours at the AQ and all titled ‘After Hours’: Lee Konitz, Bob Malach, Ira Sullivan, Bob Rockwell. I have them all and they’re all worth having.”

Andrea Canter adds this to the list:
9  Nichola Miller: “Thou Swingeth”

And there’s also:
10  Atlantis Quartet: “Lines in the Sand”

Have we missed anything? Please comment.
Posted by Pamela Espeland at 1:32 PM