Seventeenth in a series. After almost 20 years in St. Paul – first on Jackson Street in Lowertown, then in the Hamm Building near Rice Park – the esteemed and beloved Artists’ Quarter jazz club will close January 1. As we near the end of a jazz era, we’re asking musicians (and a few others) whose lives have been shaped by experiences at the AQ to share their three favorite memories of the place, the people, and the music.

When I was 15 years old, I played my first gig at the Artists’ Quarter. My dad drove me to the club because I couldn’t drive yet. It was a pretty seedy place in those days and I had never set foot in the club before.

I remember walking in and seeing Eddie Berger setting up for the night. I walked up to him and said, “Hi, I’m Bill Carrothers. I’m the sub for Mikkel Romstad tonight.” Eddie said to me, “Bring your piano in and get set up.” I said, “I didn’t bring a piano. I thought there was one here.” So my dad drove all the way home to Excelsior and got my Wurlitzer and brought it back so I could play the second set.

While he was gone, I sat at the bar and someone slid a Mickey’s Big Mouth over to me. Of course I drank it. I felt like a king, sitting in a jazz club drinking a beer. After that first gig, I felt like one of the fold, a small thread in the tapestry of jazz. I thought to myself, “I’m a jazz musician.” It was a great feeling. I never had any doubt after that night what my direction in life would be. And it all started at 26th and Nicollet in south Minneapolis in 1979.

I didn’t meet Kenny Horst until later. To be honest, we didn't hit it off all that great for a while. I was young, headstrong, with the sort of black-and-white attitudes about life that only the young possess. I was also blunt, acerbic, and a pain in the ass. But, over the years, Kenny saw past my faults and he and I have become very good friends. I don’t know exactly when that happened … I suppose we both got older, more tolerant, less fanatically committed to our own points of view. And we’ve played a lot of really fun gigs together at the AQ over the years. Music has the power to change and to heal, and it certainly has had a positive influence on our ever-growing friendship.

I want to take this opportunity to thank Kenny for the Herculean effort he has made over the years in keeping jazz alive in the Twin Cities. There is no one else that I know of who has made as direct and powerful an impact on the quality of jazz and jazz musicians in the upper Midwest than Kenny Horst. Thanks to Dawn as well for believing in her husband’s dream and for helping him to pursue it. And thank you both for providing a venue for musicians to try out their latest projects and hone their craft.

The AQ has been a permanent axis around which all of the jazz musicians that live and/or grew up in Minnesota have revolved. It has always felt like home to me, the place where I learned the craft of playing jazz music, and I am very hopeful that somehow the Artists’ Quarter will continue for another 40 years to be a home for musicians young and old.

With love and respect,

I played the AQ for the first time in 1998 [at the Jackson Street location]. December. Wintertime. Jack MacDuff was still alive, and he came by and we had a ball. That’s the first time I actually met Kenny and his wife, Dawn.

The next time I played there was in 2002 [at the Hamm Bldg.]. Again, it was in December. They had Billy Holloman’s organ there – I think he had a red organ. I was on the road and touring around and had my own organ with me. I tried Billy’s and wasn’t too crazy about it, so we brought mine down the stairs.

We played for three nights. It was great. We would stay until three or four in the morning, talking with Kenny, having a good time. We’d go to Mickey’s Diner after, go to bed about seven in the morning. I don’t do that anymore.

Kenny is so generous. Such a sweetheart. I remember my drummer, Byron Landham, was having trouble with a bass drum pedal, and Kenny gave him one of his. We had a tour bus, and he would stock it for us. That’s the kind of guy he was. We always enjoyed hearing him play, too. He had a very unique style – his own style on the drums.

Whenever I came in, it was like a big party. I got to know the Petersons – Billy and Bobby. I got close with all those guys. We always had a lot of fun. Over the years, I’ve gone there and sat in many times. Everything always went good. Everything was smooth. The audiences were really lovers of the music, because that’s all they were going to get there. Music and a drink. Maybe sandwiches, or you could order a pizza.

The last time I officially played there was in 2007. Winter again. They were having a jazz festival outside, in a heated tent. I couldn’t believe they were going to do that in St. Paul in February. They ended up cancelling the outdoor part and moving it inside to the AQ.(1)

The AQ is a great environment. A real musicians’ music club. I can’t say enough about that. It had a very soulful vibe to it. When you know the owners, you know why.

It’s a Wednesday night, and like most every Wednesday night, I’m stepping on the 16 bus to meet my girlfriend at the Artists’ Quarter. She’s my most loyal fan for the weekly jam I’ve held there for about a year now.

I get my bus transfer at 6:25 on the dot. Perfect timing to get to the AQ by 7, see who’s shown up to play, warm up hastily with a whole-tone lick while reading the inkjet-printed cartoon about performance-enhancing drugs in the green room. I’ve been playing with each of the musicians in different capacities since college, and every week we hit this bandstand and dig, excavating the melodic lessons left to us from the masters. As I shuffle through my coverless fakebook to find tonight’s shared journey, my Metro Transit neighbors ask about my musical backpack. My horn ensures there’s never an idle moment between strangers and the ding-sing of the bus. Another story of how long I’ve been playing and where I’m headed, another invite given (it’s free), and hopefully another live jazz fan in the making.

Fifth and Market. Here I am. The anticipation is great. I’m hoping we draw enough of a crowd to justify Dave opening up early, and to sell some drinks. Stepping off the bus, I breathe in the cool air, forgetting my ‘job’ of picking the songs to take in the ice skaters along Landmark plaza. There’s no [Minnesota] Wild [hockey] game tonight, so we should all arrive on time.

To no surprise, my friends are here. My MUSICIANS are here. Jesse’s looking over changes in his iRealBook, with his eager head and cheetah-striped Zubaz pants. Adam’s walking in with an upright [bass] the same size as him, talking about a sick band he recorded last week at SignatureTone studio. Aaron’s setting up his kit and charmingly talking about the graduate philosophy program he’s no longer with, and a new player is here, an older guy named Steve Kenny. I haven’t heard of him before, but the usual quartet of 20-somethings can sense his comfortableness in this room. With these stories. Amongst these posters. He asks if he can play and I say sure. This is a jam, and what’s music without people to make it with you?

The sign outside the door says “Tesfa Quartet + Jam,” but realize this is our crew. This is our group.

“Blue Monk” to start with – something easy – and tune up. My solo opens the night, a calm display to let a story build but show Steve I know how to play (while making eye contact with my girl in the audience). I’m playing these notes for you, as all the horn players, quintets, bands, legends, open mic-ers, and dreamers have before, from the first-time stage takers to headliners making their annual appearance. The Artists’ Quarter is the club that kept us playing, sharing those journeys of so many before us. This is the club that pulled me from weekend and Wednesday night work to share my spirit with friends. This is the club that will always be our club.

Thanks to regulars David Feily (guitar), Geoff LeCrone (guitar), and Will Kjeer (piano); the many people who have graced our stage over the past five years; Davis at the door; our regular audience; the players checking us out before the 9 p.m. show; the dimly lit “No performance enhancing drugs” cartoon in the green room; Dave for making the drinks strong; and Kenny for giving this green college grad a regular gig.

(1) We thought the idea of an outdoor jazz festival in Minnesota in February, even in a heated tent, was crazy, but we drove to St. Paul anyway. Maybe something went wrong with the heat in the tent, or maybe it was just too cold, but we had gone inside the St. Paul Hotel and were seated at a table by the window in the St. Paul Grill when Joey DeFrancesco’s tour bus pulled up outside. In the first picture, that’s Jazz Festival executive director Steve Heckler on the left, Joey’s drummer Byron “Wookie” Landham on the right. We always meant to use the second picture as our Christmas card. 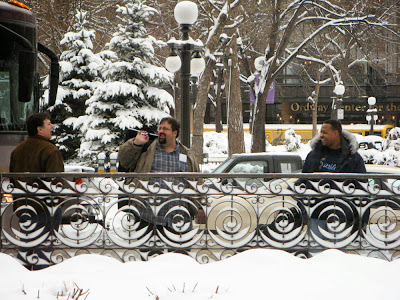 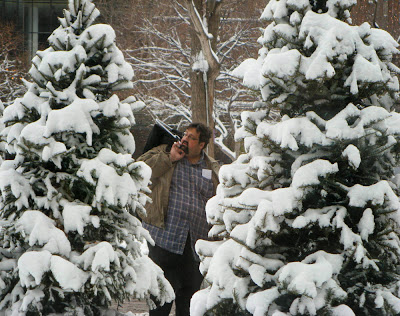 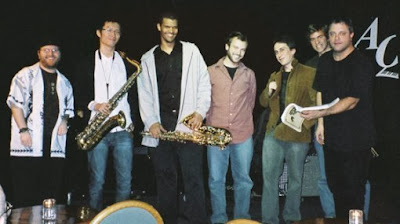 Posted by Pamela Espeland at 8:33 PM