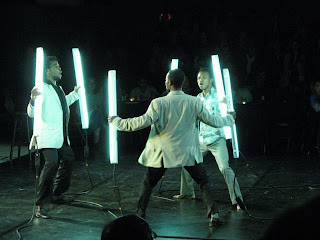 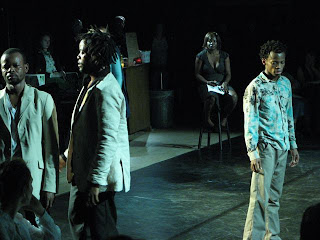 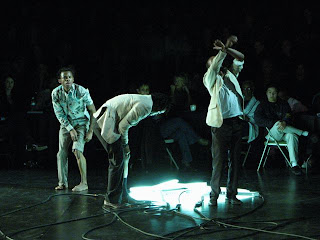 11/2/07, Cedar Cultural Center: In the Walker Art Center's description of this event (which the Walker co-presented), a Festival of Lies is "an age-old and surprisingly joyous combination of tradition and myth in which villagers gather to drink, dance, feast, and concoct outrageous lies about their leaders." For the three-day residency of Congo-based dance company Les Studio Kabako, the Cedar became a Kinshasa social club: the usual rows of metal chairs were moved to the sides on bleachers, with a few cafe-type tables added. You could buy wine and beer, and food from Tam Tam's African Restaurant.

I went to the Friday evening performance without knowing what to expect, and left realizing how little I know about the history of the Congo and Africa in general. Much of what I saw and heard was over my head. Not that Congolese history hasn't been wildly complicated by the slave trade, colonization, foreign interference, despotic rulers, coups, murders, rebellions, riots, war, anarchy, poverty, corruption, human rights abuses, and the Ebola virus. Even its name has changed several times, from Kongo Kingdom to Belgian Congo to Republic of Congo to Democratic Republic of Congo to Zaire and back to Democratic Republic of Congo. (At one point during the program, we were asked to stand up and sing the country's national anthem, and a company member called out, "Which one?") Who can keep track? How can people survive? How can art exist?

They carried long fluorescent lights representing the truth, which they arranged and rearranged on the floor, piled together, and sometimes covered with their bodies. Linyekula and the other two men stripped down to their Calvin Kleins and became at the same time stronger and more vulnerable. A table of broken dolls was slid onto the floor, and the dolls were arranged in heaps and rows. Mumbu told a story about wanting to vote, having the right to vote, but having no elections in which to vote. She told how American soap operas on TV were an escape, when electricity was available. Mobutu's words kept coming. The band played and the company pulled audience members onto the floor to dance. They were still dancing when we left and walked out into Cedar-Riverside in a city plagued with its own problems, but it seemed like paradise that night.

Photos by John Whiting.
Posted by Pamela Espeland at 8:18 AM