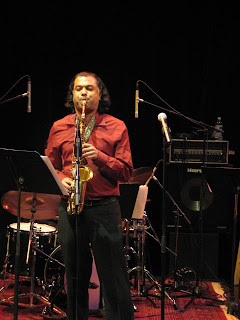 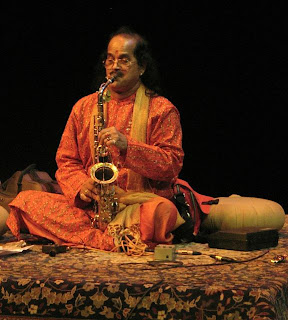 Less than a week after drowsing through Frode Haltli, we return to the Walker for the final event in its New World Jazz series, which began in September with Dhafer Youssef. The first thing I noticed was the bling on Gopalnath's saxophone. I've never seen an alto sax done up like a Bollywood prop. Coins hung from the neck and jeweled drops dangled from the bell, which also seemed to be dusted with glitter. His neck strap was a strand of crystals. Add the fact that he played his instrument while sitting cross-legged on the floor (actually a dais spread with Persian carpets and pillows) and we knew we weren't in Kansas anymore.

The music was beautiful and unusual. I have no clue what they played. Toward the end, Mahanthappa told us the group had not yet recorded together but planned to soon. He suggested that in the meantime, if we wanted to hear them again, we could buy one of his CDs and one of Gopalnath's and play them at the same time.

See Kinsmen on youtube and hear Mahanthappa talk about the project.