Turtle Island Quartet at the Fitzgerald 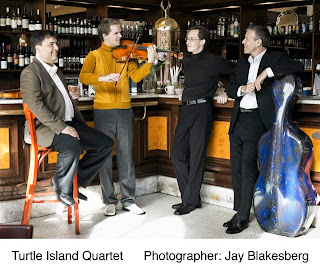 11/7/07, The Fitzgerald Theater: Turtle Island Quartet (formerly Turtle Island String Quartet) did not have top billing for this event. That was Alex Ross, music critic for The New Yorker and author of a bestselling cultural history of 20th-century music, The Rest Is Noise, which is also the name of his blog. But I came hoping to hear Turtle Island play "Resolution" from their latest CD, A Love Supreme: The Legacy of John Coltrane, and an hour and a half into the program, they did.

Presented by Minnesota Public Radio, hosted and moderated by Fred Child of American Public Media's "Performance Today" classical music radio show, the evening was an interesting concept: Child and Ross would talk about Ross's book, and Turtle Island would interrupt with music now and then. Or was it the other way around? Ross had good anecdotes and insights, I bought his book, and I'll read it, but he looked kind of bored on stage when he wasn't talking. Or maybe he's shy. He had his MacBook Pro and used it to play bits of music by Stravinsky, Milton Babbit, Bjork, and Osvaldo Golijov, which boomed out through the Fitz's big speakers. (When we first entered the theater, the take-your-seat music was something repetitive and noodly by Steve Reich, and John hated it.) Meanwhile, Turtle entered and exited, playing Paquito d'Rivera's "Wapango," "Green Dolphin Street," Cole Porter's "Love for Sale," something by Leonard Bernstein, and finally Coltrane's "Resolution," bookended by "Psalm." Having heard John Abercrombie's stringy quartet just two nights before, I was primed for more strings, and Turtle Island—David Balakrishnan and Evan Price on violins, Mads Tolling on viola, Mark Summer on cello—made me happy.

I've given short shrift to Ross. I do look forward to reading his book, which has gotten terrific reviews and is selling really well for a book on classical music. It's stacked on top of four other books about music I also plan to read: Best Music Writing 2007, Oliver Sacks's Musicophilia, Daniel Levitin's This Is Your Brain on Music, and two big books on jazz edited by Robert G. O'Meally, which may be more than I can chew. There's also the winter 2006 issue of Brilliant Corners: A Journal of Jazz & Literature which my friend Andrea brought me back from New York. I want to read faster, and listen to more CDs.

Photo from Turtle Island's Web site. How come I never run into string quartets in bars? And where did Balakrishnan and Price put their violins?
Posted by Pamela Espeland at 3:26 PM