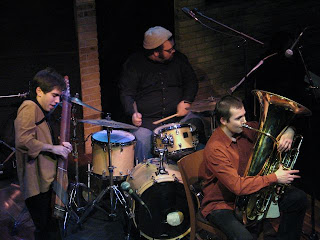 11/24/07, The Dakota: I previewed this Dakota late-night show for MinnPost and showed up to share in the fun of the CD release party. Stefan Kac played tuba and Japhlet Bire Attias the Chapman stick. Nick Zielinski sat in for regular PM3 drummer Owen Weaver, who's in Texas going to school. Like most musicians, Zielinski plays in a variety of bands and ensembles, one with the enticing name ARP of the Covenant. Another is the Restoration Jazz Band with trombonist Dave Graf.

PM3 played tracks from their new (first) CD: "All Over Town," "The Brazen Ms. Montgomery," "Uncrossed Deserts," "Isolation" (the title track), "Question and Answer," "Canzone per Nino Rota." They sounded great, and the house was full; we were up in the mezzanine again. Japhlet introduced one tune by saying "Here's a song you younger ones might not know, by a group called the Beatles." Then they played "Fool on the Hill." I felt about a zillion years old.