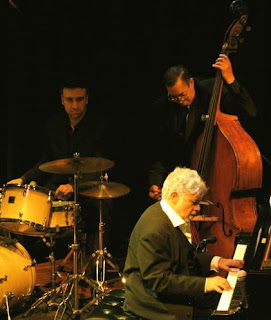 An all-acoustic, thoroughly satisfying show. This was my first time hearing Alexander live, though I often enjoy his CDs (Concrete Jungle, Impressions in Blue, Rocksteady, My America). The trio began with an original composition called (I think, but I'd rather be wrong) "Grub," then a gentle ballad called "Don't Go" before playing what many had come to hear: Alexander's jazz takes on tunes by his compatriot Bob Marley.

We heard "Running Away" and a beautiful "No Woman No Cry," both from Stir It Up, Alexander's first Marley collection (1999). (Concrete Jungle came out in 2006.) "No Woman" began as solo piano, tender and comforting (baby, please don't cry), after which the bass picked up the melody. Later, a loose and easy "Little Darlin'" took an unexpected turn when Shakur's bass went pit-deep and growled. The encore was a little bit of everything that finally settled down into "Fly Me to the Moon."

It was an evening of effortless swing, three fine musicians playing as one, three happy men on stage before a happy crowd. Don Berryman later said, "One word: Groovy. Okay, three more: In the pocket."

Photo by John Whiting. L to R: Fludas, Alexander, Shakur.
Posted by Pamela Espeland at 10:04 AM