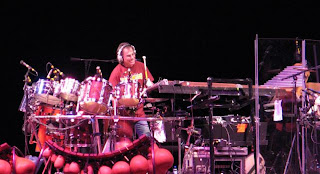 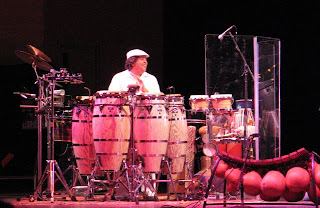 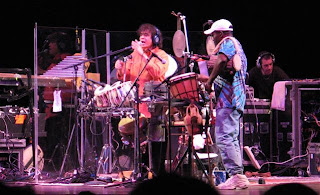 10/27/07, Orchestra Hall: In his book Drumming at the Edge of Magic, Mickey Hart writes of meeting the 18-year-old son of legendary Indian tabla player Ustad Alla Rakha. "You and my son are of the same generation," Alla Rakha told Hart. "I know you will get along. You can play with each other, teach each other, become brothers of the drum."

That was in the late 1960s. Last night, the two brothers—Hart, former drummer with the Grateful Dead, and Zakir Hussain, now arguably the most famous tabla player in the world, a national treasure in his native India, and a prodigious artist who has worked with George Harrison, Ravi Shankar, Van Morrison, John McLaughlin and Shakti, as well as with Hart (their co-created, co-produced Planet Drum CD won the first Grammy award for world music, in 1992)—joined Nigeria's Sikiru Adepoju and Puerto Rico's Giovanni Hidalgo onstage at Orchestra Hall for an evening of what Hart calls "deep drumming." Adepoju and Hidalgo were also part of Planet Drum, so the Global Drum Project (the tour and the new CD of the same name) is a reunion.

Not everyone loved it; some people left almost immediately after the music began (were they expecting Osmo?), but the rest of us were richly rewarded with an ecstatic trance of rhythm and noise that lasted nearly two hours. The stage was filled with percussion instruments. At stage right, Hidalgo the conguero danced among congas, bongos, djembe, cymbals, bells, and gourds, playing most with his hands. Wearing a Golden Gophers T-shirt, Hart took center stage with his version of the trap set and beyond: something that looked like a xylophone, something that looked like a zither (and was played with a metal bar), and countless more objects he would pick up to beat, rub, stroke, shake, or sometimes just contemplate; percussionists seem to spend a lot of time considering what sound they want to make next, even during live performance. Hussain and Adepoju were at stage left, Hussain surrounded by his many tablas and other Indian instruments (including what looked like metal beaver tails), Adepoju holding his talking drum in his armpit. To Hart's left, behind Hussain and Adepoju, was a fifth man, Jonah Sharp, whose job, in Hart's words, was "computer enhancement and spectral processing." Both the CD and the live performance use digital technology and ambient electronics, looping and amplifying and manipulating the sounds of traditional acoustic instruments into something new and transformative.

The concert began with Hart and Hussain playing old-growth redwood roots Hart introduced as the Squid and the Double Dolphin. It ended with the two old friends playing side-by-side African balofons—xylophones with gourd resonators. In between was music made with sticks, brushes, hands, fists, skins, strings, wood, bamboo, metal, beads, rainsticks, hammers, mallets, broom, voice, and breath; Hussain's singing (tikatikatika) was another percussion instrument. It's hard to understand why some people left. Percussion is easy. After the voice, percussion must have been the first music, and the human body the first instrument. Denying the power of percussion seems like denying the power of one's own heartbeat.

Posted by Pamela Espeland at 8:16 AM