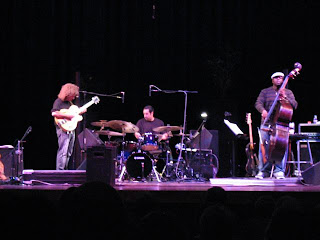 Orchestra Hall, 10/14/07: Pat Metheny, Christian McBride, and Antonio Sanchez gave us more than two hours of terrific music at the 2007-08 Northrop Jazz Season opener. Metheny played several different guitars, including a baritone and a four-neck monster with 42 strings called a Pikasso. (Until then, the most awesome guitar I'd ever seen was Fareed Haque's hybrid guitar-sitar.) Bassist Christian McBride and drummer Antonio Sanchez were Metheny's rhythm section; in an interview with the StarTribune's Britt Robson, Metheny said, "They are like an elephant and a bull, two very different but very strong kinds of power." I've seen McBride several times (including as a leader) and always enjoy his virtuosic, imaginative playing and his sheer physical presence. Sanchez I've seen just twice before: at IAJE in 2004 with David Sanchez and Miguel Zenon and at Monterey in 2005 with Metheny, McBride, and David Sanchez. This time I was really able to focus on Antonio Sanchez: how he plays with a compact efficiency that's both expressive and fierce, and how he seems to have multiple limbs, all moving at the same time and all pounding out different rhythms.

I don't know Metheny's music, so while the crowd greeted the opening notes of several tunes with claps and whistles, I was glad when Metheny took a break and told us what they were playing: an opening improvisation, "Make Peace," "Unrequited" (from Metheny's CD with Brad Mehldau), "Sound of Water," "So May It Secretly Begin," "Day Trip" (the title track on the CD the trio will release in January 2008), "Bright Size Life" (the title track from Metheny's first studio release on ECM in 1975), "Question and Answer." Toward the end, Metheny and McBride played a lovely duet of "My Romance," after which Metheny and Sanchez played a duet of their own (beginning with big drums BAM BAM BAM from Sanchez).

Orchestra Hall doesn't seem able to figure out the proper sound treatment for anyone but its own resident orchestra. Most of the show was overamped, and there was too much guitar at the expense of the bass and drums. Often the sound was distorted and almost painfully loud. I hope they do a better job with the Global Drum Project later this month.

So, what's with Pat Metheny's hair? Metheny is one of the world's most acclaimed, accomplished, and talented musicians, and his hair looks like...never mind. I won't say anything mean about a musician I respect and admire. Besides, that might open the door to a rant about Joey Calderazzo's ratty t-shirts. But must Metheny, an otherwise good-looking, rangy dude, be the Don King of jazz?

Photo: Metheny, Sanchez, and McBride on stage at Orchestra Hall. A we-were-there shot snapped with an Elph from the 10th row.

Posted by Pamela Espeland at 8:08 AM