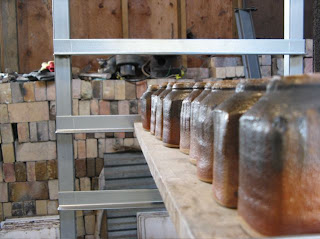 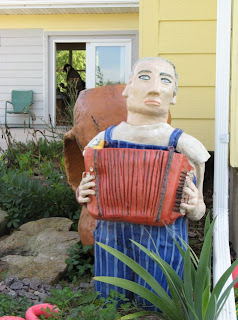 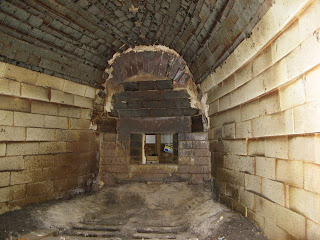 The 2007 Western Wisconsin Pottery Tour is now in its fourth year. We crossed the St. Croix toward Wisconsin's rolling and still green fields. Cows grazed, horses galloped, and creamy clouds dotted the sky. It was a perfect day for a drive in the country, where potters like to live, often at the end of bumpy dirt roads.

We began at the studio of University of Minnesota ceramics professor Mark Pharis and architect/potter Wayne Branum in Roberts, then went to see work by Jay Jensen, Wendy Olson, and guest Mike Helke from Minneapolis. From there we drove to Doug Johnson's place, a beautiful setting where the air smelled so sweet I briefly entertained the thought of moving to the country. (Pristine vistas, quiet, birds...bugs, isolation, no jazz clubs.) Next stop: Randy Johnston and Jan McKeachie Johnston, then the Victorian home and studio of S.C. Rolf in River Falls.

Rolf is one of the tour's organizers (with Willem Gebben, whose studio we didn't get to). We first met Rolf at the Uptown Art Fair five years ago, where we talked about tea bowls (yunomi) and he said something that informed how I've looked at pots ever since: For him, a tea bowl is a sketch. In conversation at his home, he said he takes tea bowls very seriously because they're so intimate; people cradle them in their hands and touch them to their lips. Rolf's guest was Winona potter Chuck Aydlett, who makes fantastic teapots.

We ended the day with dinner at Stone's, a modern restaurant in a historic building in Stillwater. If you go, try the creamed corn.

Photos by John Whiting. Top to bottom: Fire bricks and tea bowls at the studio of Mark Pharis and Wayne Branum. Ceramic yard art by Wendy Olson. Inside the anagama kiln at the Johnstons'.