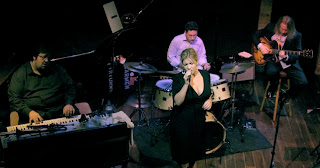 The Dakota, 10/22/07: A ticket to a Joey D show is one of the sure things in jazz. The music will be great, the vibe will be positive, and a good time will be had by all, including the musicians.

Ever since Jimmy Smith died in February 2005, Joey has been the acknowledged King of the Hammond B-3 Organ, but he still acts the same: amiable, relaxed, happy to be seated before a 400-pound monster of an instrument with two keyboards (and 122 keys), two octaves of foot pedals, multiple presets, stops, and special effects, and a separate cabinet called a Leslie with rotating speakers that give the B-3 its big, juicy vibrato. B-3s aren't made anymore; the last one was assembled in 1975 at Hammond's factory in Melrose Park, Illinois, a Chicago suburb where my grandparents lived. There are B-3 synthesizers but they're not the same. When I'm in a room with a Leslie, I feel a breeze.

Joey D's group was the classic B-3 trio: organ, guitar, drums. (Who came up with the idea of putting a guitar together with a B-3? It never seems like it will work, but it does.) Jake Langley is Joey's regular guitarist, and he was with him at the Dakota; Byron "Wookie" Landham must have had other obligations, so Carmen Intorre sat behind the drums, looking 12 years old. They played "Autumn Leaves," the theme from the 60s television show Naked City, and the Ray Charles classic "I Got a Woman." From where we sat, I could see Joey's feet do their mad dance on the foot pedals. After that, vocalist (and Joey's fiancee) Colleen McNabb sang "Don't Go to Strangers" while Joey played the trumpet and the B-3 at the same time. Then Colleen sang the Bill Evans tune "Waltz for Debby." Colleen studied with Patricia Barber and has absorbed some of her laid-back cool.

Joey announced that "The Sound of Music" would be their final tune, then gave us one more: "Nice 'n' Easy," made famous by Frank Sinatra. This time, Joey played and sang. He should sing more often. Maybe he could sing, blow the trumpet, and play the B-3 simultaneously? If anyone could, he's the guy.

Photo by John Whiting. Left to right, seen from the Dakota mezzanine: Joey, Colleen and Carmen, Jake. Joey's trumpet and mute are on the B-3.