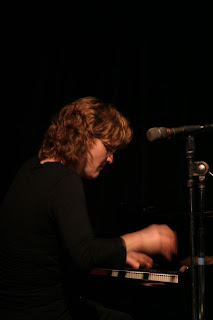 Artists' Quarter, 10/10/07: Each year, pianist and composer Laura Caviani celebrates Thelonious Monk's birthday (and the day before her own birthday) with an evening of Monk's music at the AQ. This year, she was joined by Adam Linz on bass and Phil Hey on drums. (Adam leaves soon for three weeks of sold-out performances in France and Germany with Fat Kid Wednesdays.) Laura teaches when she performs, which I appreciate, letting us know what she is playing and telling us a little about each selection. ("San Francisco Holiday" was originally called "Worry Later" because whenever Monk was asked its name, he'd say, "I'll worry about that later.") The trio gave us inventive arrangements of already inventive tunes. How can you make "Bemsha Swing" even more intricate? By playing the melody with the right hand, and also with the left hand...a half-beat or so behind, as Laura does, making me wonder if somewhere along the way she had the halves of her brain surgically separated.

If listening to Monk is "difficult," as some have said, you couldn't tell from the crowd of smiling people nodding their heads and tapping their feet. Some were musicians and teachers (in the house: Eric Kamau Gravatt, who will perform at the AQ with his band Source Code on Friday and Saturday; Matthew McCright, an instructor in piano at Carleton College, where Laura also teaches; vocalist Lucia Newell). The two generous sets included "I Mean You," "In Walked Bud," "Epistrophy," "Monk's Dream," "Ask Me Now," "Bright Mississippi," "Rhythm-a-ning," "Coming on the Hudson," "Bemsha Swing," "Let's Call This," "Sweet and Lovely" (during Adam's bass solo, you could hear him sing "Sweet...and...lovely...."), and the finale, "Blue Monk." Between sets, cake was served; talking got louder around the bar during the second set, probably due to the sugar rush.

I've always thought that Monk's music had a lot of math in it, but beautiful math--less about calculations and memorizing multiplication tables, more about planetary orbits and the geometry of snowflakes. I could never play it in a million years, but I can enjoy it when it's played as well as it was last night. As the couple sitting behind me said, "What a great way to spend a Wednesday evening!" "And for just six bucks!"

Photo by John Whiting.
Posted by Pamela Espeland at 8:32 AM