Eldar zooms in a new direction 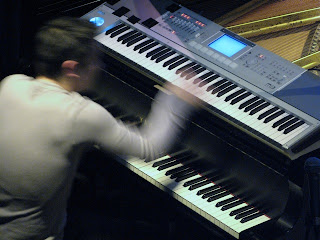 The trio is already into its first tune when we arrive. There's a vibe in the room that tells me this is not the music people came to hear. Some of the regulars look cranky. Eldar, the former child prodigy who was born in Kyrgyzstan, played Oscar Peterson note-by-note at age 3, started piano lessons at 5 (and performed for the first time in public soon after), was discovered at a Siberian jazz festival at 9, and has been compared countless times to Peterson and Art Tatum, is acting like a 21-year-old. He's pounding an acoustic piano with his left hand, tearing into an electronic keyboard with his right.

I've heard Eldar play standards and (to quote Spaceballs) these are not them. Reviews of his new CD, re-imagination, for which he's currently on tour, have been whiney: "I wasn't too impressed.... and would rather listen to a blindingly fast 'Sweet Georgia Brown' to marvel at his speeds than listen to any of the tracks on this record." 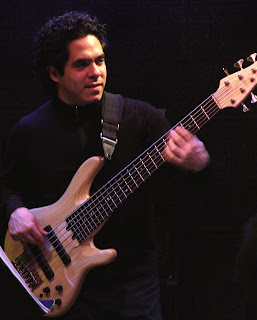 DJ Logic plays turntables on the CD and I wish he was in the room tonight. Bassist Armando Gola has played with Gonzalo Rubalcaba, Arturo Sandoval, and Martin Bejerano (pianist with the Roy Haynes Quartet), drummer Ludwig Alfonso with Spyro Gyra. Gola has gigged with Eldar before (recently at the Blue Note on a double bill with singer Sophie Milman, which must have been an interesting juxtaposition). Someone at the Dakota tells us this is Alfonso's first engagement with Eldar. Gola is a good match for Eldar; Alfonso seems tentative at times, but not all the time, and shows flashes of ferocity. He holds his own. 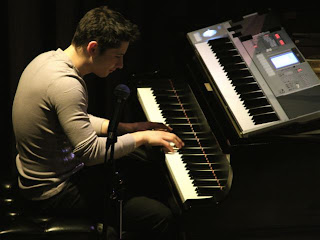 Much of the music is incredibly fast, full of fireworks and sparklers. There's a reason Eldar is known for his superhuman velocity. Like a hummingbird, he probably has to eat his weight in food every day or starve. He's also strong and he hits the notes crisply and cleanly. He may have two brains. One piano solo has several rhythms going at the same time, rapid and halting and sprung.

I don't know the new CD and have no idea what I'm hearing. (The CD is mostly original compositions and a few standards: Johnny Green's "Out of Nowhere," Peterson's "Place St. Henri," "Blackbird" as a bonus track. Go here to see and hear Eldar play "Place St. Henri" at the 2008 NAMM show.) Eldar doesn't talk much but occasionally, in between hundred-yard dashes, he gives us the name of a tune they have just performed; Gola's "Blues Sketch in Clave," his own "Insensitive," a ballad, sort of, but with a bazillion notes and classical-sounding phrases popping up like bubbles in a rolling boil. Something called "Passage." 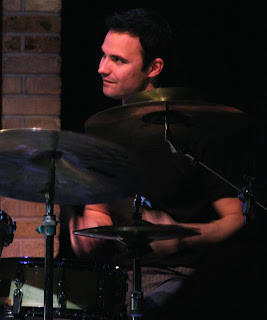 At the end, he announces, "Now I'll play a standard. You guess what standard it is." Afterward, several people try to guess. I go to the green room and ask. It's "Donna Lee."

The set gets mixed reviews from people we hear on the way out. What, Eldar is supposed to play Oscar Peterson forever?

All photos but the first by John Whiting.
Posted by Pamela Espeland at 3:30 PM