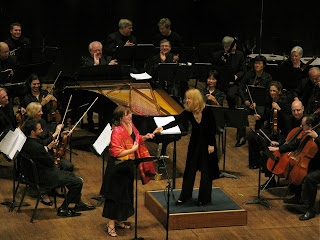 Last night Maria Schneider showed that she can write classical music as colorful and descriptive and satisfying as her jazz compositions, and lead a classical orchestra she has known for a few days as adeptly as her own jazz orchestra, which includes a core group of musicians who have been with her for years.

The original program included Ravel's Chansons madecasses, to be sung by Upshaw. We heard that Upshaw was ill last weekend and this probably accounts for the switch to the Pavane.

There was a moment of transporting magic during the Delage (also noted by Pi Press reviewer Rob Hubbard). It happened in the second of the Four Hindu Poems, "Lahore," when Upshaw sang a lengthy passage of vocalise (wordless singing--not the same as jazz vocalese, where lyrics are written for instrumental melodies). You can hear something similar on Upshaw's recording of these songs, which appears on The Girl with Orange Lips (1991). Last night's live performance may have been longer, more elaborate and daring--perhaps higher in some parts. I held my breath.

During Schneider's piece, I found myself wondering what might have happened had Frank Kimbrough been at the piano instead of the SPCO's Layton James. This is not to disparage James in the least; he's a wonderful artist and has been a SPCO mainstay for decades. But Kimbrough has held the piano chair in Schneider's orchestra and worked closely with her since 1993.

This will be the last thing I write about Maria Schneider—until the next interesting thing she does. Earlier this year I went to see her rehearse with the MacJazz band. That's when I learned she was working on two new commissions: one for the Monterey Jazz Festival in September and one for soprano Dawn Upshaw and the Saint Paul Chamber Orchestra in October. Over the next several months, I ended up reporting on and attending both world premieres, leaving a trail of verbal crumbs: