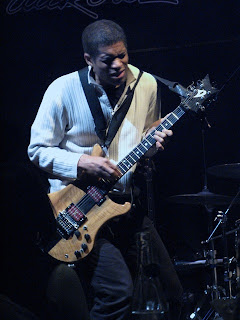 We're so blown away by Stanley Jordan's first night that we're back again. So are many people we saw here last night. Is it possible he'll be as good as he was?

He's better. More relaxed, more expressive. You see it in his face, his hands, and his body: he twists, turns, bows, bends, and reaches for the sky. He moves from guitar to guitar and piano and back again to guitar, and if he did in fact have more than two hands he would probably play more than two instruments simultaneously.

Much of the music is the same as last night--in name, in chord structure, in melody, but not in how they play it. "El Condor Pasa." "Eleanor Rigby" (I think; this time it's the trio, not Jordan alone). A joyous interpretation of Horace Silver's "Song for My Father" is added to tonight's playlist (it's on the new CD as well). Moffett is even more fiery than last night; his "Star Spangled Banner" (which begins as "America the Beautiful") screams and wails, loops and buzzes. At times his bass sounds like a steel drum. Barattini is terrific on the drums. 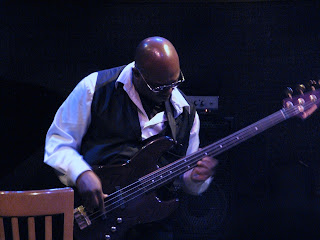 "How Insensitive." The Mozart again but not again, with ten thousand new notes. One encore only, "O Holy Night." After the concert, Moffett sits at the bar and I bring him a big bushel of adoring fan talk. I stand before him and babble about how wonderful he is. I can't help myself. Out in the lobby, Jordan is surrounded by fans and CD buyers. I wait until the end of the line, then take his picture with the lovely Deborah.

I thank him for his music. He stands very still and talks very, very quietly. After the sound and fury and virtuosity of his performance, he exudes silence and calm. 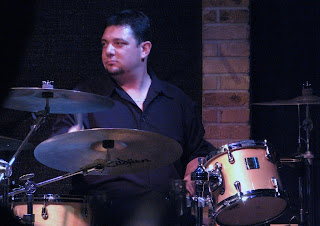 Posted by Pamela Espeland at 2:37 PM